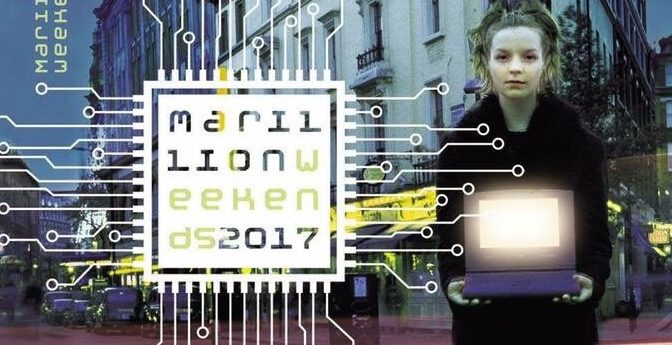 A review of the Marillion Weekend in De Monfort Hall, Leicester, April 28th-30th, 2017

Disclaimer: this review is based on my own personal experience at the Weekend; I’ve heard every night described as “the best”, which just goes to show that it was a memorable occasion for everyone who went.
Every two years something magical descends upon a select few cities around the world. A band by the name of Marillion and a few thousand dedicated fans come together in a celebration of the band’s music, history, and the effect they have had on numerous individuals across the world. The three-day mini-festival sees the band playing three completely different sets across the weekend with different support bands and other unofficial activities and concerts happening during the day.

The support bands for this weekend were Lonely Robot, John Mitchell‘s epic, space-prog band with a seemingly infinite number of satisfying, soaring lead lines and vocals, The Dave Foster Experience, the musicians that turn Steve Rothery into the Steve Rothery Band, featuring some memorable soloing from the eponymous guitarist, and Tim Bowness, which saw the support slot venture into the avant-garde with No-Man melancholia, down tempo discord and obscure Walking Dead references.

But this weekend was all about Marillion.

The first song of the Friday night – ‘The Release’, a B-side from 1989’s Seasons End album – set the tone for the rest of the evening: a mammoth 20-song set featuring a wealth of lesser-played tunes which delighted the hardcore fans (who constitute most of the audience). Overlooked classics such as ‘One Fine Day’, ‘Estonia’, ‘Faith’ and ‘Beyond You’ received a rare airing, as did weekend highlights ‘A Voice From The Past’ and ‘100 Nights’. There was also time for more staple tracks such as the live favourite ‘Sounds That Can’t Be Made’ which always leaves the audience singing long after the song itself has ended.

A short acoustic section broke up the set which began with a solo song from Hogarth, with the other band members slowly congregating in the middle of the stage to close with the version of ‘The Answering Machine’ from the 2009 acoustic album Less Is More. This was a clever way of reviving some material from that album without having to do an entire acoustic show, which may have not been welcome from everyone in the audience.

“And now they call us political,” mused Hogarth on Friday as the band finished anti-war slow burner ‘A Few Words For The Dead’ as if in anticipation for the full performance of FEAR on the Saturday Night. This was not the only album celebrated on Saturday – a selection of songs from 1987’s Clutching At Straws served to celebrate the album’s 30th anniversary. Most are often found in live sets, but it was a pleasure to hear rarer tracks such as ‘White Russian’ and ‘Incommunicado’. There was, however, a lack of cohesion to the set; the more pop oriented earlier songs such as ‘Market Square Heroes’ didn’t gel with the broodiness of FEAR tracks ‘El Dorado’ and ‘The New Kings’, and there seemed to be a sense of functionality to the night – the band were playing these songs because they had to – and not much interaction with the audience. With that said, however, the performances were all solid and outside the context of the Weekend it would have been a great show. ‘Living in FEAR’ is a great live track and the first UK performances of ‘The Leavers’ and ‘White Paper’ did not disappoint.

Sunday night was a triumphant return to form and was the most special night of the three. The full performance of marillion.com was elevated by a string quartet and a live trumpet player and saxophonist. The songs worked wonderfully together in a live setting, especially ‘Enlightened’, ‘Interior Lulu’ and ‘House’ and the band seemed to enjoy every minute. The now traditional ‘surprise the band’ took place during ‘Go!’: at the climax of the song, hundreds of finger lights were lifted into the air creating an undulating, multi-coloured sea of light – a truly special moment. The final tracks of the Weekend represented everything that Marillion do best, from the cacophony of ‘King’, to the soundscapes and deeply personal lyrics of ‘This Strange Engine’. There was time for a couple more deep cuts featuring the horns (may as well use them while they’re around, eh?) before the final song: ‘One Tonight’, part 5 of ‘The Leavers’. The song features the mantra for the Weekend – “we come together”, and was a glorious crescendo to a sublime weekend of music.

A special mention has to be made for StillMarillion, a well-established Fish-era Marillion tribute act whose singer, Martin Jakubski, plays with the Steve Rothery Band. They played two sold out afternoon shows on the Saturday and Sunday and confirmed why they, too, have such a loyal following. Both sets were completely different and they played almost every song Fish recorded with the band, including in-joke track ‘Grendel’ – one of the only times someone called out for it and it was actually played! Jakubski’s vocal delivery is excellent and the band plays perfectly; a huge amount of fun and singing was had in the intimate setting.

*No cameras were allowed.