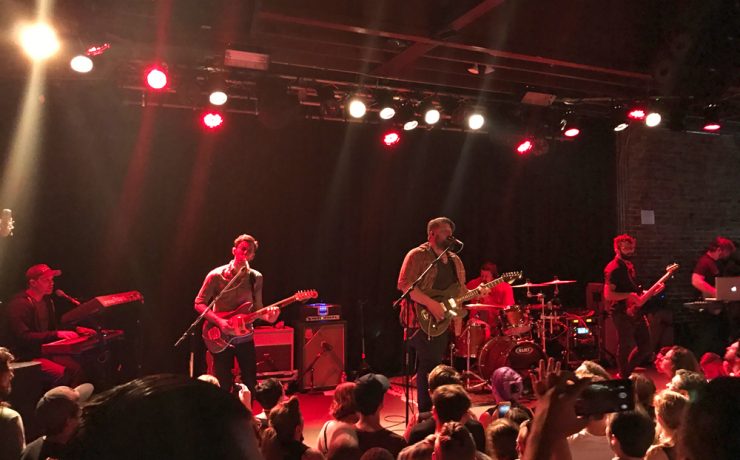 The Dear Hunter have been on a national tour as the opening act for Coheed and Cambria over the last few weeks.  On a few off nights, the group have scheduled a handful of headlining shows where, thankfully, they get to perform more than the standard 45 minute opening set.  This night in Orlando was one of this joyous evenings.  The Social in Orlando is a small club but with a perfect layout.  The stage is laid out on one side of the club parallel to the bar on the other side with the rest of the open area allowing for a perfect viewing spot regardless of where you stand.  Local act Pathos, Pathos gave an entertaining opening set, their music a mix of Death Cab for Cutie and Violent Femmes.  At just around 9pm Casey Crescenzo and the band took to the stage.

For bands that are so impressive sonically on their studio recordings, it is often difficult to recreate the magic on stage, especially when the band is trying to do this in a club and not with a multi-million dollar PA system as you might find in an arena.  That immediately is the first thing that is impressive with The Dear Hunter.  Opening with the first 2 songs from their latest release, ACT V, “Regress” and “The Moon/Awake”, the band sound tremendous.  All the orchestration and overlayed vocal harmonies are in place and the energy is palpable.  Casey’s ability to hit each high note with ease and equal emotion, places him as one of the top voices in rock today.  Each of the 6 members on stage handles his tasks brilliantly as they run through the first 9 songs, all from their last two albums, Acts IV & V.

Many fan favorites were played including tracks like “The Bitter Suite parts IV and V”, “Waves” and “The Revival” which invite the audience of nearby college goers and older fans to sing along, at times overpowering the music coming from the stage.  It is not a requirement to be one of the indoctrinated to enjoy a Dear Hunter show, but it certainly is more fun.  There are certain known points that fans sing or add yells and cheers, as if they know the secrets to these songs.  Witnessing a young crowd enjoying such brilliance is also something that provides hope for live music. For a band that dips its toes into the Prog waters, this was certainly not a typical Prog audience of 40-60 year old males.

The band closed out the remaining 30 minutes by featuring songs from ‘The Color Spectrum’ for 4 out of the remaining 6 songs.  They finished with the rockous track “This Body”, but not before segueing into the ending of “She’s So Heavy” from The Beatles.  Casey Crescenzo is an amazing talent, able to write some of the most adventurous music out there today, but do not be fooled into thinking this band might not be as good in concert, because nothing could be further from the truth.  Run, don’t walk to a show by The Dear Hunter and get indoctrinated as soon as possible.