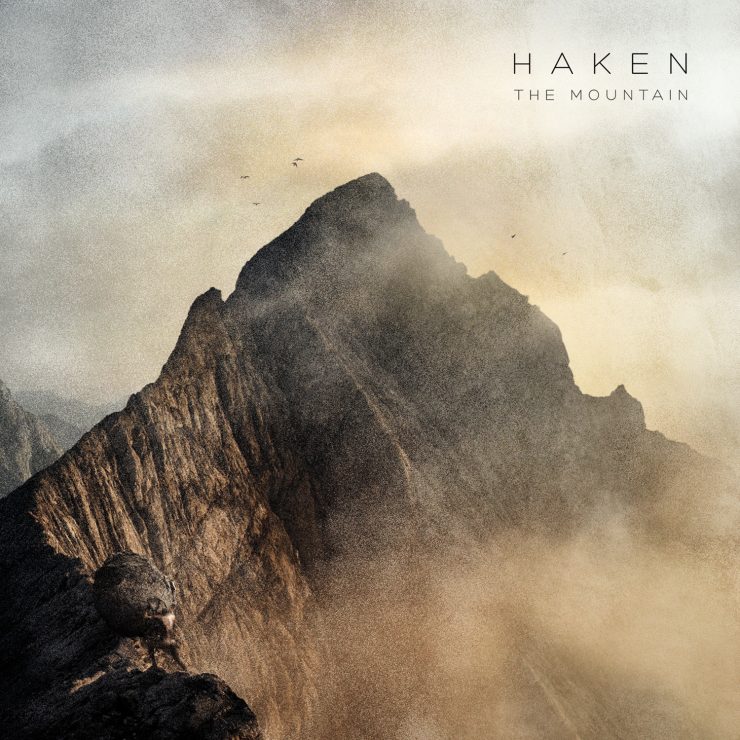 Haken are relatively new to the Prog metal scene but in only 3 years have certainly made the Prog community take notice. Riding the line between Prog metal and traditional 70’s Prog, they bring a very melodic style to what lately has become an aggressive and technical genre.  Long songs are placed alongside simpler shorter songs with ease and they jump styles as easily as they swap time signatures.  In 2010, they released their first album Aquarium, which was an impressive debut showcasing some incredible musicianship.  While the songwriting may not have been as diverse and solid as it is now, you could tell this was a band worth keeping an eye on.  2011’s Vision’s was another step forward with the title track being a 22 minute masterpiece that stands among the best epic Prog songs ever.  Vocalist Ross Jennings took a leap forward with on the 2nd disc sounding more confident and solid vocally and overall the songs were more focused.

This brings us to the new release The Mountain.  While many bands’ 3rd album is the one that cements their place along the music landscape, not many take as great a leap as this one does from its predecessor.  It is yet another step in this band’s journey and what an enjoyable ride it is to listen to.  Lyrically, the songs deal with life, loss and coping with despair.  The Mountain represents this band’s rise to the top and the difficulties of getting there.

The opening track, “The Path” is a prologue that sets the mood thematically with a beautiful melody that is reprised along the rest of the cd.  It is what drives this cd and makes it not just another Prog metal cd.  While the band has said it is not a concept record exactly, the opening track along with the layout of the rest of the tracks does give it the feel of a concept album.  The opening leads into the next track “Atlas Stone” which begins with a picturesque piano melody.  Quickly the guitars come in and you sense the Dream Theater influence.  There is a lot of “Scenes From A Memory” in this album.  The band is able to throw in surprises at every turn, as in “Atlas”  where the bands goes into a Yes vocal harmony session, something you might not expect from a band like this.

Another surprise is the Spock’s Beard/Gentle Giant influenced “Cockroach King”.  The polyrythmic vocal gymnastics are nothing like this band has done before and they prove up to the challenge.  But this is still a dark and heavy song as it gets going.  It is one of the most adventurous songs this band has written.  The next track, “In Memoriam” is a 4 minute hard rock song, not focusing on shredding but on presenting a strong verse and chorus.  The songs are not entirely guitar riff driven, as in this case, where the lead is the piano.

It’s at this point that we are treated to the highlight of this cd in my opinion.  I might not always draw attention to the ballad on a cd, however, “Because It’s There” is a unique song.  It is as much of an unexpected standout as when Queensryche released “Silent Lucidity” after never writing a song like that before. Lyrically, being about about following your dream, and living life to its fullest, this track is really is really the centerpiece of the album.   Reprising the opening theme from “The Path” with a chorus of what could be a choir of monks, the vocals continue to build until the guitar comes in.  The drum sampling in the verses also keeps this song from sounding outdated.  But the chorus is where the band brings it home.

Paired with the impressive “Falling Back To Earth”, the album here presents a 1-2 punch that makes a statement about what this band wants to be.  Just shy of 12 minutes, this song is the exact opposite musically of “Because It’s There.”  The first half of the song is the heaviest few minutes of the album featuring numerous guitar solos, bass tapping and more.  Midway through the song shifts into a slow moody direction with heavy guitars, strings and screaming.  They tie it all together in the end with a repeat of the chorus.  “As Death Embraces” is sort of an brief piano interlude leading into the other feature track and current single “Pareidolia.”  This song features one of the highlight instrumental moments with banjo guitar dual solo.  Reminiscient of something Tool might produce, the track doesnt feel out of place but rather fits perfectly as the featured rock track just before the epic ending.

The album closes with “Somebody”.  This song is also a change of direction for the band showing a lot of maturity and growth.  Similar in approach to something like Dream Theater’s “Space Dye-Vest” the song is slow but continues to build to an orchestral finale that is both powerful and haunting.

“The Mountain” is a major statement from and up and coming band that we can expect great things from.  It is a band that clearly wants to step away from traditional Prog metal and intends to break the boundaries of what is expected from a band in this genre.

Key Tracks: Pareidolia, Falling Back To Earth, Because It’s There