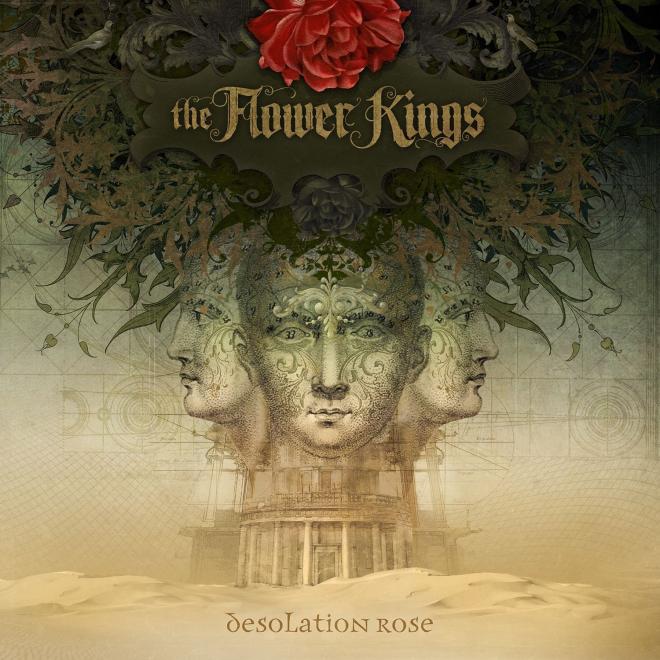 The Flower Kings have been around since 1995.  With their latest release, Desolation Rose, they might have made one of their most accessible and enjoyable disc in their 12 album discography.  After returning from a 5 year hiatus with Banks of Eden in 2012, they waste no time with putting out their latest release.  The disc also contains the same lineup as the previous record with drummer Felix Lehrmann returning with Roine Stolt, Hasse Fröberg, Jonas Reingold and Tomas Bodin.  For those you are not familiar, the group usually include at least one 20-30 minute song on each album.  Not the case here, as the band decided to split what could have been one song into 3 or 4.  In doing so, they allow the music to breathe and make it easier to absorb.  And what you end up with is some of the most exciting and melodic progressive music to come out this year.

Opening with the lone epic on the cd, the 13 minute “Tower ONE” is the highlight of the album, showcasing all that is good with this band and with Prog music in general.  A bit of an odd choice by most progressive album standards as an opening song, rather that start with the usual big musical overture, Tower ONE begins with some hi-hats and keyboards and subdued vocals as an introduction to the main theme of the song.  Quickly the song builds and we are off.  There is a great chorus in this one with some Genesis style keyboard parts.  With Roine singing the opening segments, you are reminded about how Transatlantic sounds more like Flower Kings than any of the other members original groups.  The Transatlantic feel is more apparent on this release than the previous “Banks of Eden.”  The track reaches its high point around the 6:30 minute part, where the song transitions into an upbeat tempo highlighted by a dual guitar, keyboard lead part.  It is here where as a listener you are truly glad you put this cd on in the first place.  “Tower ONE” ends with a slower, bombastic theme, where the reprise of the opening verse is carried over some beautiful lead guitar work, borrowing a bit from the school of Neal Morse with the epic orchestral ending.

While “Tower ONE” leads off in grand style, it is almost a standalone track compared to the rest of the cd.  From tracks 2 thru 8, the album sounds more like a concept record with the songs flowing from one to the other.  The band has described the album as darker in tone and more politically charged than their other releases.  With “Sleeping Bones” the band does show off a darker side, as is the case with much of the record in moments.  There is a marching feel to the main riff in this song, which gives it a heavier feel than with most Flower Kings albums.  This brief track leads into the centerpiece of the cd, the track “Desolation Road.”  The lead keyboard riff is memorable and stunning at the same time.  Singer Hasse Froberg is featured on this track and his voice shines here.  The main chorus of “In silent graveyards, they look for saviors…” is executed with perfection and serves as the central theme for the album, repeated in various spots on the record.

“White Tuxedo” is the perhaps the most political song on the album.  It kicks off with the voice of Richard Nixon and has a dark, yet groovy melody.  The harmonized vocals in the chorus lend a variety to the cd. While perhaps not the best track on the cd, this is an important album track in developing the mood and story.  The second half of the song has some of the more progressive part musically featuring some chaotic moments.

‘Resurrected Judas” is a long prog-ballad and another memorable song.  The band transition seamlessly from melodic verse to chorus to interesting bridge sections with a smoothness and ease that makes it seem like this song could have been written in minutes.  Around the 4 minute mark is where this song really gets going with some incredible progressive movements, again recalling recent Transatlantic albums.  They repeat the opening section chorus to closeout the song in spectacular fashion.

The song goes right into “Silent Masses” which is your typical Flower Kings type song.  It does repeat the “Silent graveyards” part towards the end.  “Last Carnivore” is more uplifting and has a great chorus that will have you repeating “seven matches seven…” throughout the day.  And finally, “Dark Fascist Skies” is a heavy song for this band and is in many ways, the ending to the “Desolation Road” portion of the cd with its big definitive ending.

“Blood of Eden” is a beautiful 3 minute ballad that is welcome after the intensity of the previous few songs.  “Silent Graveyards” is the reprise of the theme of the same name that had been repeated throughout the album.  It is a brilliant way to close out an incredible record and one that will no doubt draw new fans of this longstanding, legendary Prog band.  Consider this cd one of the best Flower Kings albums to come out in a long time.