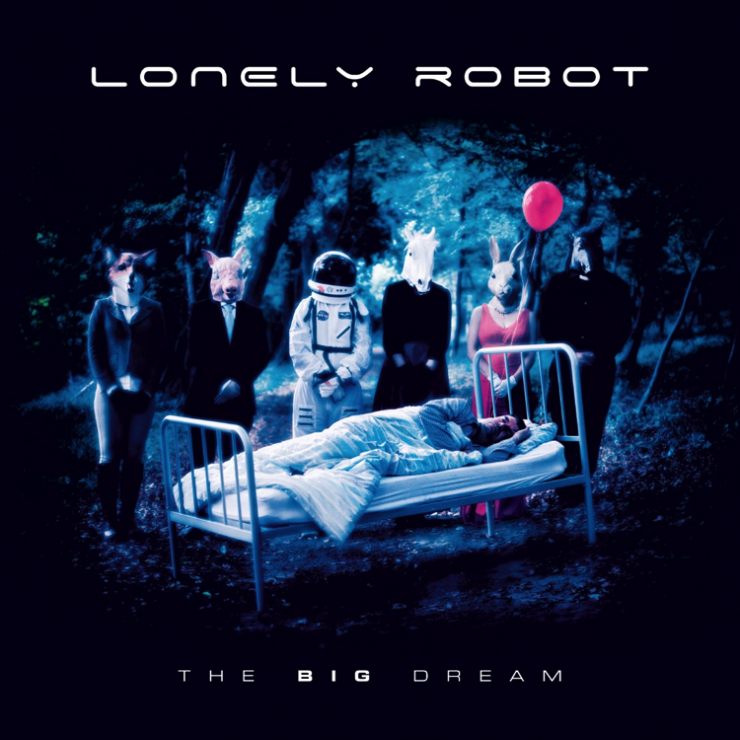 Review of the new Lonely Robot album-The Big Dream due out April 28th, 2017

You may have seen John Mitchell’s tribute to his good friend and band-mate John Wetton – a fine rendition of “Battle Lines” (if you haven’t, click here.) He performed the song beautifully on the sad occasion of Wetton’s funeral in February 2017, to due acclaim.

Mitchell moves in august circles, and not just those of Wetton – he has, for example, also recorded or performed with Pete Trewavas, Martin Barre, Nick Beggs, Steve Hogarth, Jem Godfrey and Steven Wilson’s drummer Craig Blundell, amongst many others.) Despite this, he seems to be less prominent (especially in North America) than one would expect. In the UK and Europe, Mitchell is quite well-known for his brilliant work with It Bites, Frost* (who quite clearly took the “Best Surprise Band” prize on Cruise to the Edge), Kino and Arena. He is a highly accomplished guitarist, singer and composer and should, quite frankly, be far more famous than he is. Mitchell’s personal solo project is called “Lonely Robot” (not because it is the name of a band, but because it relates to his central concept of an astronaut lost in space). Mitchell is a big fan of sci-fi movie soundtracks, and Lonely Robot is a result of that.

Having revived It Bites in 2006, by filling the formidable shoes of Francis Dunnery, with two excellent albums (the last largely penned by himself) and several tours, it is perhaps within the context of his achievements in It Bites that Mitchell’s activities are most often analyzed. This may seem a little unfair, but while It Bites is on seemingly unending hiatus, it is a fact that the many fans of that band will understandably follow Mitchell’s activities with a proverbial microscope, almost hoping for Mitchell to create “It Bites Solo”.

But Lonely Robot is not that. While hints of the great work he brought to It Bites are unavoidably there, this is undoubtedly a John Mitchell solo project. The first Lonely Robot album, 2015’s “Please Come Home” was extremely well-received, and justifiably so. Mitchell himself expressed surprise at the success of “Please Come Home” (it flirted with the rock charts, and the live concert at the Scala, was highly successful.) Now Mitchell has released the follow-up, “The Big Dream”, which sees the protagonist awakening in a forest surrounded by mythical animal/human creatures. Apparently the new album is the second in a trilogy, so one can only imagine where the storyline will lead us next time around.

For now, “The Big Dream” will be a welcome release for those starved of Mitchell’s sumptuous offerings, including It Bites fans. Frost*’s recent release “Falling Satellites” was a brilliant and fabulous offering, but while Frost* is more Jem Godfrey, Lonely Robot is all John Mitchell – he is credited with all instruments and vocals except for drums, which were played by Blundell and some backing vocals by Bonita Mckinney.

“Prologue” starts the album with a high keyboard note that is (possibly intentionally) the same as that which starts It Bites’ “Underneath Your Pillow”, but soon changes course to follow an entirely different direction – ethereal backing behind a narrator’s voice-over asking highly philosophical questions “I have often wondered what it must be like to go to sleep and never wake up. To be simply not there for ever and ever… that’s such a curious thought.” The narration gives way to heavy guitar riff that is the foundation for “Awakenings”. Solid but rhythmically complex, this massive song kicks the album off to a very promising start. Mitchell’s recognisable lead guitar makes its entrance in an imperious solo that is gripping in its power.

This musical styling continues with a Mitchell/Mckinney harmony over a sonically fat production in “Sigma”. Mitchell tends to make a little too much use of the compressed “telephone” effect on his own vocals, but bearing in mind that this is as close to a Sci-fi movie soundtrack as any Prog album is likely to be, it is fitting, if a little formulaic. The chorus is not remarkable, but the instrumental middle passage is enormous, and allows Blundell to unleash his formidable skills. He is a mighty drummer indeed.

As its name would suggest, “Floral Green” is a melancholy exploration of Mitchell’s gentler side. The narrator begins the song, after which Mitchell’s baritone melds beautifully with Mckinney’s tasteful harmonies. Again, the guitar solo is a piercing reminder of Mitchell’s world-class competence in this department.

“Everglow” is the Proggiest and possibly the best song on the album. Mitchell’s reputation for superlative guitar solos precedes him, and this one does not disappoint. The song is built around a massive metal riff that is distinctly recognizable as Mitchell’s own. Blundell’s percussive exploits are once again simply incandescent and the arrangement takes the listener to levels of musicality close to Mitchell’s best.

“False Lights” continues the theme in a more speculative mood, with Blundell the architect of a 5/4 staccato drum pattern that lies at the heart of the song. The jerky, climbing guitar pattern that serves as a replacement for a guitar solo is brilliant. It peaks in a frenzied cornucopia of sound before a climactic ending. This song exhibits Mitchell’s production credentials with a full, yet somehow spacey sound. He and Blundell make a formidable team.

“Symbolic” flirts with the ordinary and the repetitive, to begin with, but then a middle section in 6/8 and a staggering Mitchell guitar solo save the song. It ends with pensive piano chords and the narrator’s musings.

“The Divine Art of Being” is a gorgeous melody built on another syncopated Blundell drum pattern. Craig Blundell has undeniably flowered into one of the world’s great Prog drummers, and the various ways in which Mitchell uses his unique skills as a counterpoint to his own heart-wrenching vocals and guitar, are simply wonderful. Mitchell”s emotion suits the composition, and Blundell’s varied drum patterns, perfectly. This song will make your heart ache.

The title track (and longest song) will bring tears to the eyes of John Wetton fans. I do not believe that Mitchell will for one second deny the influence that his late friend has had on his career, and that is to be found throughout his work, but none more so than in this song. Mitchell shows his production chops with a very unusual reverse reverb effect woven into Blundell’s drums in the beginning of the song. A sense of foreboding is established, and the song is wrought with the astronaut’s angst. Blundell is unleashed throughout and his furious drumming is once again a perfect complement to Mitchell’s Crimson-esque instrumentals. It really could be a movie soundtrack. The narrator makes a lengthy appearance in the middle section of the song – “Going to sleep but not waking up” is the core theme that introduces an anguished guitar solo that would impress even David Gilmour devotees with its enormity. Familiar words from the first album are reprised: “Please come home lonely robot, your heart is beautiful, programmed to receive”. The enormous sadness of this reprise closes with an interstellar sound effect that gives a visual context to the aural emotions being experienced. I wonder if Wetton himself was on Mitchell’s mind when he was putting this together?

“Hello World Goodbye” finds the astronaut reconciling himself to the fact that he is back floating in space. Again, it sounds, quite intentionally, like it belongs on a sci-fi movie – you can imagine the visual image of the astronaut floating resignedly in space with the Earth in the background. Mckinney’s harmonies are prominent on this one, and Blundell looms huge at start of the guitar solo which is again, magnificent. Mitchell is one of the few guitarists whose solos you actually look forward to in every song, since each is so finely crafted.

Final song “Epilogue (Sea Beams)” is formed around a plaintive piano melody that is almost Baroque in its styling. Beautiful melody gives way to another sci-fi sound effect, and so the album ends.

I realise that comparisons are odious, but there must be thousands of die-hard It Bites fans asking whether they can reach to this album for fulfillment, since it is all they are being offered for now. Well, like the first album, this is not It Bites – it lacks the pop quirkiness of the latter, and therefore might be received by some as second best to that. But the album is nonetheless fulfilling and excellent, as anyone who knows John Mitchell’s work would predict.

You may expect shorter and darker songs than the first album, but still filled with all that is John Mitchell. Expect his unique compositional skills, his immediately recognizable voice, and lots of that wonderful, immense Mitchell guitar precision and sound. Expect earth-scapes and scenes of space to be sketched in your mind. Expect sadness and emotion combined with technique. Expect innovative production and Craig Blundell, Prog’s new king of drummers, at his furious peak. Hey, you are even allowed to expect a little taste of It Bites, 2012-style.

John Mitchell is that rarest of things: a fabulous composer, multi-instrumentalist and producer with a unique voice and massively underrated guitar chops. He creates inescapable melodies combined with genuinely progressive tendencies and swarthy production. “The Big Dream” finds him in a darker space than “Please Come Home”, but one feels that reconciliation to a happier place (perhaps closer to his It Bites legacy) is inevitable in the final chapter of the astronaut’s story. It will no doubt be awaited with eagerness.

This album is a grower – you will enjoy it more with every listen. I think that right now, Mr Wetton would be proud of his friend.