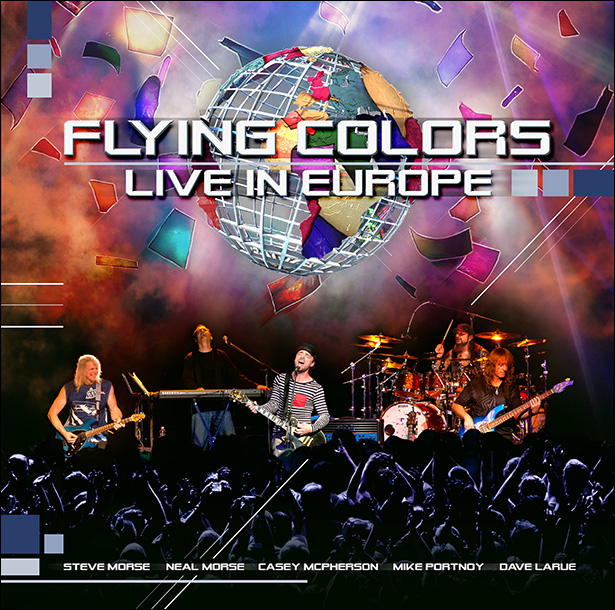 Flying Colors finally release their long awaited CD/DVD/Bluray of their successful tour from 2012/2013.  I was fortunate enough to be at the New York show, one of only 2 US shows the band did before heading off to Europe.  It did not disappoint and neither does Live In Europe.  If you would have asked me to create a band with my 4 favorite musicians at their respective instruments, I might have come up with Neal Morse, Steve Morse, Dave LaRue and Mike Portnoy.  So to me this is was a dream lineup the minute I found out about it.  And Casey McPherson is a perfect compliment to this group of stellar musicians adding some great pop rock vocals.

The setlist kicks off with the brilliant opening track “Blue Ocean” and leads predictably into the heavy “Shoulda Coulda Woulda.”  From there the band start mixing things up from slower tempo song to upbeat rock track to displays of prog genius.  A few of the highlights are “The Storm” which comes up even better and more anthemic than on the album, “June” which highlights all of the group harmonizing together and is truly uplifting, and the powerhouse prog track “Infinite Fire” which is the perfect encore song for this show.

The band do a great job of putting on a full show based off of one studio album by contributing songs from their previous bands.  The songs chosen for each are  a perfect representation of each of the members’ pasts;  Casey McPherson (Endocine) “Can’t Find My Way”, Steve Morse (Dixie Dregs) “Odyssey”, Dave Larue “Spur of the Moment”, Mike Portnoy (Dream Theater) “Repentance” and Neal Morse (Spock’s Beard) “June.”

The bluray footage is equally as impressive and a great momento of what hopefully is just the first of many tours from this supergroup.  What makes this band unique is that they produce memorable pop rock tracks with the musicianship of top notch progressive rock musicians adding in enough elements to keep any listener interested and entertained.  If you missed out on the cd last year, get this and become a fan instantly.

Recorded Live at the 013 in Tilburg, Netherlands.