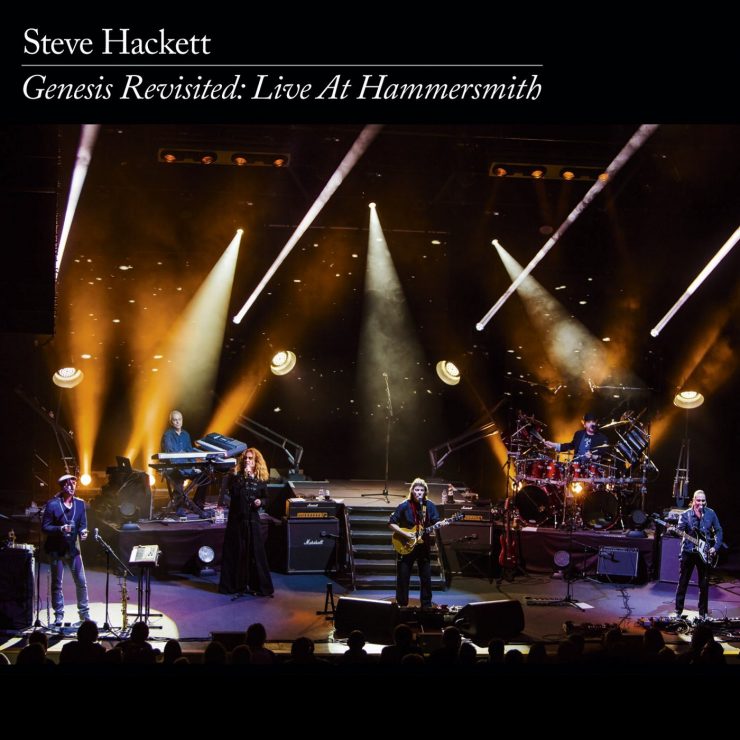 Steve Hackett Genesis Revisited Live at Hammersmith is a celebration of some of the greatest music ever produced.  With the help of a stellar band and some guests, Hackett brings to life again the beauty and power of Genesis and the music from the early albums when he was a member.  Shot from a May 10th gig at the Hammersmith Apollo Theatre in the UK, Hackett picks the best songs from the storied catalog and performs them note by note as if preserving true works of art.  And in 5.1 surround sound, you feel as close as you can to the music without actually being there.

The stage is simple and allows the focus to be on the musicians and the performances.  There are screens in the background that add the appropriate imagery for certain songs.  Of course, the perfect opening song, “Watcher of the Skies”, kicks off the 2 1/2 hour show.  Vocalist Nad Sylvan, sounds enough like Peter Gabriel and does a very respectable job tackling very challenging vocals throughout the show.  He takes lead on most of the bigger songs (Watcher, Supper’s Ready, Musical Box).  Hackett takes center stage as the star of the show.  An incredible guitar player in his own right, he proves he can still shred with the best.

One of the highlights early in the show is “The Lamia” performed exquisitely by Nik Kershaw.  Not known as a progressive rock musician, his interpretation is emotional and makes the song stand out.  Steve Rothery comes in towards the end and joins Steve in trading guitar solos.  “The Musical Box” brings out the first standing ovation from the crowd, the ending as powerful as ever.

“In That Quiet Earth” is a nice surprise to see live and showcases some monster drum work from Gary O’Toole while John Wetton joins in right after for a powerful version of “Afterglow.”  Somehow his voice has not changed in 30 years.   And Supper’s Ready closes out the set.  Here Steve shines with some amazing guitar work at the end. It is then close of the main set.  The band return for an encore of “Firth of Fifth” and “Los Endos.”  The band are tight and perform “Los Endos with precision and truly seem to enjoying themselves as they reach the end of what is an incredible show.

Thanks to Mr. Hackett for carrying the torch of this great catalog and performing it for generations old and new.  It is a joy to watch and to listen to.  Let’s hope he continues this for years to come.

CD2
1. Unquiet Slumbers for the Sleepers
2. In That Quiet Earth
3. Afterglow
4. I Know What I Like
5. Dance on a Volcano
6. Entangled
7. Eleventh Earl of Mar
8. Supper’s Ready