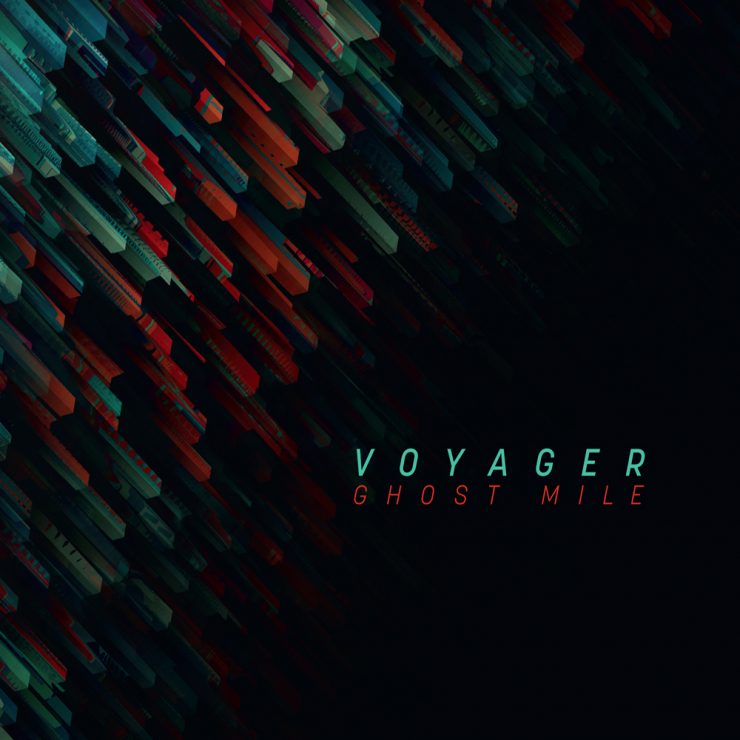 Australia’s Voyager, nearing their 20th year, have somehow been one of Prog Metal’s best kept secrets, at least in the US.  Their last album ‘V’ was a glorious, bombastic expression of the band’s melodic sound and perhaps their best album, until now with their latest release, Ghost Mile, due out on May 12th.  The album finds the band taking their established style and amping it up another level.  The band went to PledgeMusic for this album, crowdfunding the record, and in doing so have been able to do things in a way that have seemed to benefit the group in every way.  The songs are focused, the production is impeccable, and as a whole, the album is as strong a collection as the band has produced.

The opening track, “Ascension” is the perfect introduction to the band.  If there was one song to show someone who has never heard them before, this might be the one to go with.  The song opens with a beautiful clean-toned guitar melody, before exploding with mammoth guitars and drums.  Vocalist Daniel Estrin is in fine form here with his unique style of singing.  It suits the music perfectly and creates a different experience than the average prog Metal band with a space age sound that is almost a mix of Devin Townsend and 80s New Wave bands.

“Misery is Only Company” speeds things up with a frantic pace throughout the verses before settling into a brilliantly catchy chorus. Drummer Ashley Doodkorte shows off his chops on this track and is a marvel on the album.  “The Fragile Serene” is carried through with an atmospheric use of keyboards and has a power ballad feel while the brief 2 minute track “To the Riverside” provides a nice reprieve and intro to the album’s peak track, “Ghost Mile”.  This song basically contains all the best elements of the band and introduces a few new highlights as well.  The double-ride cymbal chorus section is this album’s arena, fist-pumping moment.  It is immediately countered with the album’s heaviest and craziest breakdown. Another interesting song is the electronic, synth based “What a Wonderful Day” which has an odd hook in the chorus and a killer riff.  The album fittingly closes on the epic “As the City Takes the Night” which builds to grand ending with the use of vocal harmonies and acoustic guitars.

‘Ghost Mile’ is a 45 minute adrenaline ride, that lets up only for a few brief moments.  It is not an album that tries to be everything to all people.  It resides in its own purposeful space and that is explosive, loud, and filled with as many melodies as double bass drums.  Voyager have indeed succeeded here with one of, if not the best, album of their long career.

Released on May 12th, 2017
Key Tracks: Ascension, Ghost Mile, Misery Is Only Company

Tracklisting:
1. Ascension
2. Misery Is Only Company
3. Lifeline
4. The Fragile Serene
5. To The Riverside
6. Ghost Mile
7. What A Wonderful Day
8. Disconnected
9. This Gentle Earth
10. As The City Takes The Night