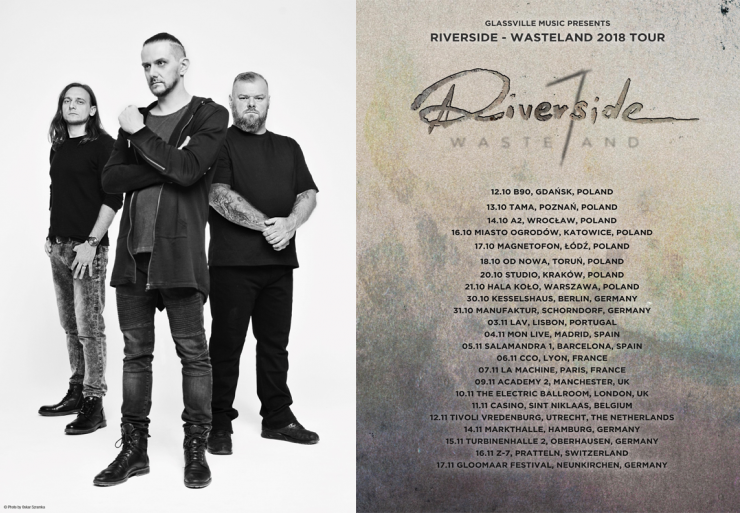 Progressive Rock masters RIVERSIDE have just signed a new deal with longtime partners InsideOutMusic and are pleased to announce their upcoming seventh studio album “Wasteland” as well as its corresponding first European tour for October/November.

RIVERSIDE checked in with the following words:

“Well, we’re back in the game! We’re happy to tell you that our seventh album will be called “Waste7and” (Wasteland) and will be released at the end of September this year. It will be our first album recorded as a trio. Our music has become more serious and more mature, so get ready for a manly and emotional album. “Waste7and” is going to be a really accomplished one. It combines the emotional character of the first two and the production maturity of the latest two releases. If everything goes according to plan (as we’re still recording), the new Riverside album will simply d e s t r o y you 🙂

Also this year we’re going on the “Wasteland 2018 Tour” to promote the new album. Below you will find a list of the cities we’re going to visit in the autumn of 2018. Tickets go on sale this Friday, June 1st. More info soon!“

In regards to the extended co-operation via a new deal between RIVERSIDE and InsideOutMusic, Thomas Waber, label manager/A&R international InsideOutMusic, checked in with the following comment:

“We have been working with Riverside for a long time now and there is a lot of personal history. The InsideOutMusic family would be very different without them, so I am extremely pleased that the family is staying together. We all miss Piotr dearly, but i am looking forward to this new chapter. You are still with us, Grudzień!”