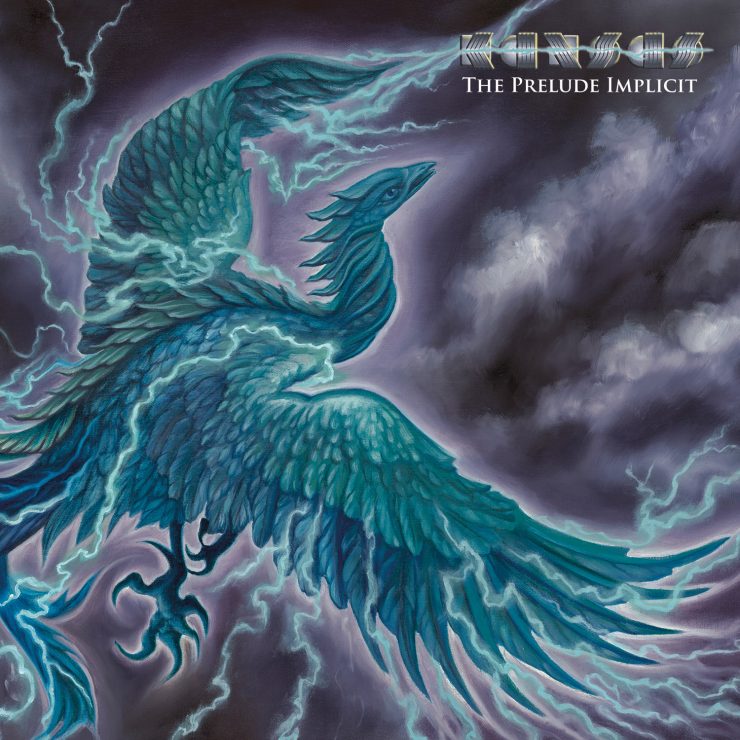 Kansas is a band. Kansas is a band who are releasing their first studio album in 16 years, following the exit of an original member/lead singer/primary songwriter and the addition of three new members in the last two years. So let’s get right to the bottom line, because sure, on paper those doesn’t sound like the best circumstances to precede a new album, and many of us have had our disappointments with ‘tribute band’ versions of legendary artists. This ain’t that. The Prelude Implicit is an excellent album, and it’s an excellent Kansas album.

The Prelude Implicit is the work of a band fully in their stride, a band who are comfortable and confident in their musical arrangements and performances. Newcomers Ronnie Platt (lead vocals/keys), David Manion (keys), and Zak Rizvi (guitars) sound fully integrated, and their contributions allow Kansas to pull off arrangements that just haven’t been possible (or desired?) since Kerry Livgren and Steve Walsh were in their prime. The addition of a second guitarist (who’s not Steve Morse) frees up original guitarist Rich Williams to build massive, muscular riffs reminiscent of Masque or Leftoverture. Platt’s vocals sound familiar, while never sounding like he’s trying emulate his predecessors in the band, and he displays an emotional range that Walsh and John Elefante occasionally neglected as they grabbed another high note. The newfound energy on keys–and especially the pervasive use of proggy organ sounds–provides a perfect, classically Kansas counterpart to David Ragsdale’s fiery violin. And while the attention on Kansas has often unjustly neglected the rhythm section, original drummer Phil Ehart and longtime bassist Billy Greer play a prominent role here that can’t be overlooked.

This re-vivification is perhaps obscured in the opening track and first single, “With This Heart,” but the comfortable confidence shines through. The song begins with bright piano and an almost-tribal drum pattern before Platt’s reassuring vocals enter; acoustic guitar and violin peek through but make a grand entrance only following the first chorus. This is not the strategic choice of a band trying to prove their chops as a rock or prog band; this is just a good band playing a good song (plus it probably doesn’t hurt that it’s fairly radio-friendly). The “One Big Sky” of this album, “With This Heart” is an uplifting mid-tempo reminder that adversity is not the final word on our futures.

However, “Visibility Zero” kicks in the rock with an organ swell and dual guitar/violin riff that strongly suggests mid-70’s Kansas. The band take this heavier, proggier approach further on “Rhythm In The Spirit” and “The Voyage Of Eight Eighteen.” Both tracks feature plenty of muscular, inverting guitar riffs; organs that alternate between grand swells and furtive stabs; and fiery violin solos. Most impressively, these songs offer extended instrumental sections where guitar/organ/violin play around each other or intertwine, frequently coming together on the same note in triumphant completion of a ‘hot lick.’ “Rhythm In The Spirit” is a highlight of the album, combining hard rock with Kansas’ rhythm & blues influences throughout, then segueing into programmed drums and a funky bass line until fadeout. “Camouflage” also emphasizes the heavier side of Kansas, with incredibly tight drum tone, punchy bass, brash guitar riffs, and soaring violin solos.

“The Voyage Of Eight Eighteen” is the longest song on the album and, unsurprisingly, it features multiple proggy sections in which every instrument is given a run through the spotlight. It bounces between moogy-synth and screeching violin, howling guitar and crashing drums, rolling organ and assertive bass, then back to screeching violin. Kansas has used this playful approach to arrangement on many songs, from “Apercu” to “The Spider” to “Rainmaker,” and this track stands proudly side-by-side with those flexing of the virtuoso muscles.

“Summer” is the ‘fun-rocking’ track on The Prelude Implicit, gleefully indulging nostalgia without a hint of schmaltz. Like many other songs on the album, everyone gets a chance to assert themselves musically, and despite its relatively short length “Summer” is one of the busier moments here. On the final vocal track, “Crowded Isolation,” Kansas combine everything they’ve done so far on the album and somehow come up with another masterpiece. The rhythm section alternately pounds and settles into a groove, the lead instruments of guitar/organ/violin give each other space whilst remaining busy, and the vocals move between the defiant and the uplifting.

Ultimately, however, Kansas have always been about more than progressive virtuoso chops and fun rockin’. They’ve always had an emotionally and socially conscious core that contemplates the meaning of human life (“Dust In The Wind,” “Two Cents Worth”), the value of the natural world beyond human interests (“Song For America,” “Death Of Mother Nature Suite), and the plight of those left behind by ‘progress’ (“Cheyenne Anthem,” “Taking In The View”). The two ballads on this album carry on this tradition. “Refugee” is a gorgeous prayer that inhabits a space somewhere between lament and homily. Taking on a devastating human story that gets quickly usurped by political self-interest in our current public discourse, this plea for empathy appeals to several different aspects of American identity: patriotism/regard for freedom (In a search for freedom very far away), religion (God, please, please protect the children), family (And you know the time has come to leave your family and flee/But the thought of leaving chills you to the core), and conscience (Oh, what’s become of us? Is it right to line our heads within the sand? Oh, what’s become of us?/ Are we so blind, that we can’t understand?). The closing track, “Section 60,” is an instrumental named for a plot in Arlington National Cemetery that is reserved for the continuing incoming casualties of wars in the Middle East. Appropriately, this elegiac conveys notes of both mourning and triumph.

Well-grounded enthusiasm aside, the album is not entirely without flaws. Robby Steinhardt’s vocals are missed, as they have been on most Kansas albums since Vinyl Confessions. This claim is no mark against Platt’s excellent work, but rather a nod to the special quality that contrasting lead vocals brought to other classic Kansas albums. Greer and Ragsdale have proven themselves capable lead vocalists, so it would be nice to hear more adventurous vocal arrangements–possibly with three alternating lead vocalists?–on future albums. And as Kansas songs go, “The Unsung Heroes” won’t make any favorites list. Apart from the obvious logical paradox (they’re not unsung anymore now, are they?), it doesn’t measure up to the rest of the album. Nevertheless, it does come across as sincere enough, and it features a killer alternation of several guitar and violin solos in the middle section.

On the whole, The Prelude Implicit is a huge success. As a progressive record, it’s inventive and virtuoso without navel gazing. As a classic rock record, it doesn’t mire itself in reaching backward, but instead carries forward the best of this band’s arrangements, energy, and emotions into contemporary production and songwriting. And as a Kansas record…well, Kansas is a band. They’re a band that tend to make three kinds of albums: (1) An invigorated ‘fresh faces’ album, (2) a comfortably confident mature album, or (3) an enjoyable but ultimately stagnated album. The Prelude Implicit manages to be both (1) and (2), with no hint of (3). Kansas has clearly decided that, if they’re going to make their first album in 16 years, it may as well be their best in more than 20.