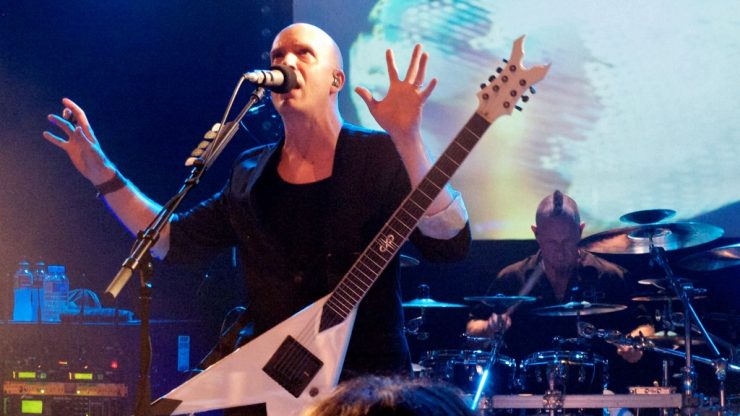 Review of the Devin Townsend Project/Between The Buried Show And Me in Charlotte, NC

Concert: Devin Townsend Project/Between the Buried and Me with Fallujah

The Devin Townsend Project/Between The Buried And Me/Fallujah ticket all play a slightly different form of progressive metal, which surely helps to cross-pollinate fans and bring in a somewhat musically-open-minded crowd. On a Monday night in Charlotte, such a crowd descended upon the Amos’ Southend for a night of progressive metal, albeit with an emphasis on the metal.

By 5:30pm the line was stretched well down the block, and it continued to grow past the scheduled opening time of 6pm until it crossed the street and continued down the next block. Testament and Meshuggah t-shirts predominated, and nearly everyone was in full black. A few folks had even brought their SYL record collection for signing. After an unexplained delay, the doors finally opened at 6:45pm, mere minutes before the scheduled start of the show.

Unfortunately, most people were still filing in and purchasing drinks and merch when Fallujah took their positions on stage. Powering through a set focused on their recent album Dreamless, this San Francisco-based ‘atmospheric metal’ band played with energy and conviction despite the situation. They played loud, they played heavy, and people responded well to the thrashing guitars and devastating growled vocal.

The ‘progressive’ aspect of Fallujah’s sound came out more in the latter part of their set, as several songs featured atmospheric keys, some expressive delay-drenched and occasionally synthy guitar solos, and pre-recorded female vocal tracks. The venue was uncooperative, however; Amos’ Southend is one of those clubs where everything from the layout (more long than wide, lots of little nooks off to the sides) to the material (hard floor, lots of hard wood, not much to dampen the acoustics) works against nuance. This led to distortion through the PA during the louder passages and loss of some frequencies during quieter times. Throughout, drummer Andrew Baird was a powerhouse, and his unrelenting fills carried the band forward. For their final song, “The Void Alone,” Hoffman had the audience pull out their lighters and phones, and it really was an impressive moment to see so many lights in the air as Hoffman recorded video of the audience. On the whole, Fallujah played an excellent set and they surely won some new fans despite the venue and late start time obscuring the distinctive musical choices that set Fallujah apart from their death metal peers.

After an incredibly efficient clearing and preparing of the stage, Between The Buried And Me came on to absolutely devotional cheers from the audience. While not technically a hometown show, the Charlotte crowd had claimed BTBAM as their own. From the very opening words of “Node,” nearly everyone was singing along with Tommy Giles Rogers, Jr. Whistles, cheers, and hands were in the air as the band moved into more bombastic moments. During “The Coma Machine,” audience members formed a pit, and this more aggressive expression of enjoyment continued with some frequency throughout the rest of the night (enough that this reviewer, who had no desire to receive a Monday night bruising, had to move further back to a safe place right beside the sound engineer).

Between The Buried And Me played straight through their Coma Ecliptic album, with Rogers, Jr. directly addressing the audience only once for a brief “Hello, Charlotte!” He was an energetic point of focus, nonetheless, dramatically shifting between microphones for different vocal effects, stepping up onto the barricade, and gesturing vigorously. The band were tight, moving flawlessly through the complicated and frequently shifting songs. Again, some nuance on the guitar leads and keys was lost to the loudness, and most of the growling was nearly inaudible. The audience paid no nevermind, with many people spinning around to sing their favourite lines to their buddies or girlfriends. A huge, lighted golden gong sat behind and above the drums, its light display shifting nearly as often as the guitar riffs. It was finally struck to end “Life In Velvet,” prompting cries of “B! T! BAM! B! T! BAM!” from the audience, who clearly wanted an encore. Alas, the band has been consistent in playing the new album straight through, and this night was not made an exception.

Set up for the Devin Townsend Project took a little longer, with multiple checks on instruments and vocal mic levels. Since this is a co-headlining tour with BTBAM, I was wondering whether many people might duck out during the wait. No way did this happen–Dev’s got a reputation for putting on a great show, and folks stuck around to experience it. The band opened with “Night” from Ocean Machine, and right from the start Devin was having fun and interacting with the audience. Even during this first song, he was standing out on the barricade talking to individuals, reacting to whatever inaudible-to-the-rest-of-us remark they had shouted his way. The sound was rough, as it had been all night, but the DTP sound engineer made a valiant effort to make sure the guitar leads, keys, and vocals could be heard, and even RVP and Beav achieved some definition with the drums and bass .

For the next song, “By Your Command,” Devin switched to his Ziltoid guitar with the Z-shaped f-holes, and many strapping young lads took again to the pit for this metal mayhem. The DTP really took the lighting up several notches on this song, and the brilliance continued for the whole set. If you’ve seen the Zim Zim tour docs, you know that Mike St-Jean has frequently ‘gone missing’ to work on the lights a bit more, and that dedication has clearly paid off. “Failure,” from the new album Transcendence, comes across every bit as powerfully live, and I suspect this one will have staying power on future DTP tours. Dev had switched back to his white Framus for this song, but no sound was coming through. Thankfully, his guitar tech had the Ziltoid guitar back in plenty of time for the adventurous, experimental solo.

Song after song, Dev was chatting with the crowd, grinning for a mile (or grimacing like the devil), remarking on how badly he had hurt his leg, and expressing gratitude for having such a great and fun job. During “March of the Poozers,” someone held up a headbanging Ziltoid puppet, garnering a loud cheer from the crowd and prompting Devin to reach out in faux pining, mouthing “we can never be apart.” One of his most memorable lines of the night was: “My leg is so fucked up. And so is my relationship with the label now” (after commandeering a fan’s phone, helping him to record video of the show, then instructing the audience to “not pay for shit” and to download every one of his thirty albums). Few rockers have such a delightful rapport and repartee with their audience.

Again, the audience clearly delighted most in the heavier moments, as on “Stormbending,” which featured some lovely tapping from guitarist Dave Young, or the simultaneously devastating and invigorating “Ziltoid Goes Home.” But on “Where We Belong,” bassist Beav Waddell led everyone in clapping during the quieter section, and Dev led a sing-along on the acoustic “Ih-Ah!” for what he called “the least metal thing that has ever happened in the history of this venue.” Unfortunately, the band was under time constraints and had to cut their set short. In response, “Higher” was moved from its pre-encore position to the closing song for the night. Since the song features so many different musical and emotional moments, it really worked wonderfully as a show closer, and I hope they continue to give this superb track a prominent place.

The Devin Townsend Project put on a great show, both in terms of technical proficiency and metal energy, but they especially put on a fun show. Devin opened their set with the injunction to “Forget all the bullshit for a while and just have fun,” and he and the band led by example, with wonderful results.

Between The Buried And Me Set: http://www.setlist.fm/setlist/between-the-buried-and-me/2016/amos-southend-charlotte-nc-7bfdba5c.html

between the buried and me Devin Townsend Project prog rock