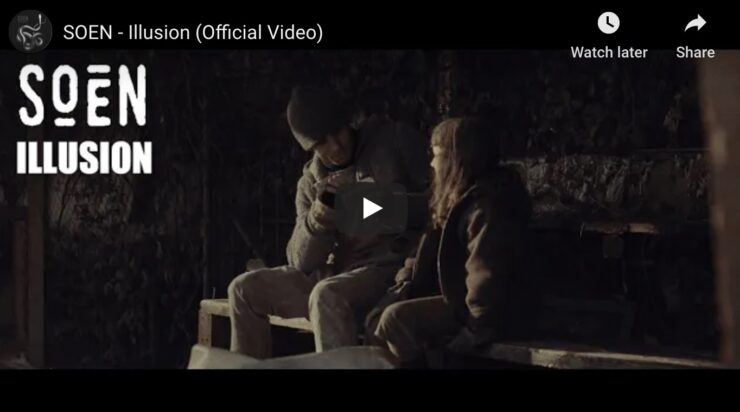 IMPERIAL will be released on January 29th 2021, via Silver Lining Music.

Swedish-based prog metallers Soen have released a video for their brand new single “Illusion,” taken from their upcoming album Imperial which is due out on Jan 29th, 2021 through Silver Lining Music.

“Illusion is a song about the shared responsibility amongst us if we wish to improve the world, change has to be made by us, you and me… the people,” says drummer Martin Lopez. “It’s about the frustration of feeling powerless but also the hope in realising that things can be changed for the better. If we stop criticizing each other and making enemies of ourselves by blindly following the ideas of politicians and their media.”

Founder members Joel Ekelöf (vocals) and Martin Lopez (drums), along with Lars Enok Åhlund (keyboards and guitar), Oleksii “Zlatoyar” Kobel (bass) and Cody Ford (lead guitar) have never shied away from challenging our perceptions of life and humanity, and IMPERIAL continues SOEN’s unique journey through the psyche of our species and the conundrum of our times. Eight crisp, sharp, and supremely constructed songs spanning frustration, reflection and hope, IMPERIAL is the most direct fierce? and dynamic release of SOEN’s journey, one which continues to be deeply therapeutic for both the group’s dedicated followers and the band themselves.

Produced by Iñaki Marconi and the band, IMPERIAL was mixed and mastered by Kane Churko, who has worked with the likes of Ozzy Osbourne and Bob Dylan, giving songs such as ‘Illusion’, ‘Modesty’ and the epic closer ‘Fortune’ a dimension and richness which will reach yet more ears and minds. The sheer power and poetry of SOEN’s dynamics are more completely executed and honed than ever before, something which is perversely a product of the COVID-19 pandemic.