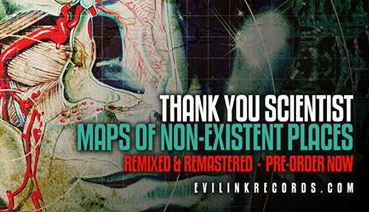 Thank You Scientist from NJ are officially the first band singed to Evil Ink Records, the new label from Coheed and Cambria frontman Claudio Sanchez.

Big news announced today for Prog Report favorites, New Jersey’s own Thank You Scientist.  The band is officially the first band singed to Evil Ink Records, the new label from Coheed and Cambria frontman Claudio Sanchez.   The label will be distributed by INgrooves and will be be releasing a fully remixed and remastered version of the band’s 2012 debut full-length record, Maps of Non-Existent Places, on September 30th, in time for their run with Coheed and Cambria’s “Neverender:IKSSE3 Tour.

In anticipation for the upcoming release, Thank You Scientist has premiered “My Famed Disappearing Act” today at https://soundcloud.com/evilinkrecords/tysmfda/s-Nzx2m. Maps of Non-Existent Places will be released digitally, Digipak CD and for the first time on vinyl. The double LP, available on both blue and black 180 gram vinyl, can be pre-ordered now at www.EvilInkRecords.com.

Thank You Scientist was forged from the music program at Montclair State University in New Jersey when guitarist Tom Monda met saxophonist Ellis Jasenovic and trumpeter Andrew Digrius. The three bonded over their love for Frank Zappa, Mahavishnu Orchestra, The Beatles and Harry Nilsson. Those influences would become the seeds for what Thank You Scientist would evolve into today.

With the addition of vocalist Salvatore Marrano, bassist Greg Colacino, drummer Odin Alvarez and violinist Ben Karas, Thank You Scientist’s lineup of virtuoso musicians was complete. The band would go on to self-release an EP, The Perils of Time Travel, in 2011 followed by their debut full-length, Maps of Non-Existent Places, in 2012, which caught the ear of Sanchez, a fellow purveyor of progressive stylings, and led to his signing of the band.

To pinpoint Thank You Scientist’s sound would be inconceivable. On Maps of Non-Existent Places they hold a virtual master class on musicianship, fusing elements of progressive rock with jazz fusion, classical, metal, psychedelic and pop for a head spinning, mind-blowing listening experience. The seven-piece band, who collectively play some 20 instruments, boasts a hyper-composed sound which is indebted to their experience and formal training in both classical and jazz idioms.

Claudio Sanchez knows a little bit about progressive music. His career has spanned 12 years and 7 albums, likely encompassing the longest concept album arc in the history of rock and roll. Now, in effort to further support and promote his beloved complex genre, he has launched a label dedicated to sharing a wealth of future talent with the first signing being the extremely talented seven-piece band Thank You Scientist.

Tom Monda, the band’s lead guitarist and one to follow in the near future, told us the story of how the tour came to be. “We played a show on April Fool’s Day at the Knitting Factory in Brooklyn and someone called the girl who booked the show and said, “I was wondering if I could get on the guest list to see Thank You Scientist, my name is Claudio Sanchez.” She called us and asked, “Do you guys know anyone from Coheed & Cambria, because Claudio Sanchez asked to be on your guest list.” We were like, “Sure, it’s April Fool’s, it’s probably one of our friends.” So we get to the gig and sure enough, he’s there at the gig. He dug the show and everything blossomed from there. He heard about us form one of his friends and started checking it out and was digging it. “

Fans can expect a new studio album in 2015. Follow the band now at https://www.facebook.com/ThankYouScientist for additional news and updates.

Aug 28 – Knoxville, TN – The Concourse at The International 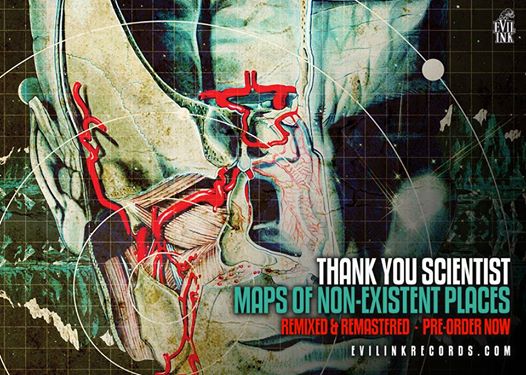