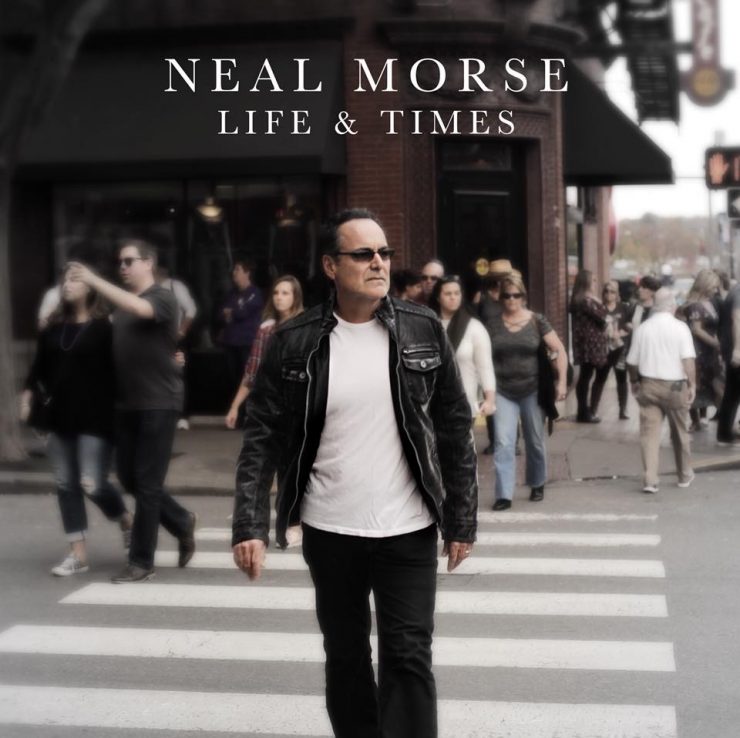 After a highly successful 2017 spent touring and promoting his album with the Neal Morse Band, The Similitude of a Dream, the busiest musician in prog rock, had to decide what to do next.  That answer came accidentally while on tour around the world with the Neal Morse Band.  Surveying different cities and people in other countries, Morse was inspired to write an album of singer/songwriter material.  Titled Life & Times, this collection of mostly acoustic, shorter songs, finds Morse embracing his storytelling ability, writing a personal record in a way that few who excel at prog are able to do.  At his core, Morse is a brilliant storyteller and songwriter and that is apparent here; a beautifully written and crafted album with enjoyable songs.  Be warned prog fans, there is not an extended instrumental section or song longer than 5 minutes to be had here.  This is not a prog album.  Despite that, Neal Morse proves he is able to write brilliant material whether it is done in 3 minute or 30 minute songs.

Largely, the album is a subdued affair and that can be experienced immediately with the opening track “Livin’ Lightly.”  The lyrics in the song explain to the listener, “I thought I’d write a song and tell you all the way I feel, but it ain’t no big deal. I just thought I’d lay it down and try my best to keep it real, like a little Neil…Young.” The song has a very James Taylor vibe and does a good job of setting the mood and letting any listener hoping for a prog extravaganza to sit back and enjoy a different experience. It is a wonderfully inviting track and a great way to kick things off.  The second track “Good Love Is On The Way” picks up the pace just slightly and sounds like an obvious radio single.  Morse’s knack of storytelling comes into play here as he relays a story of a young couple starting out.

The album’s most powerful moment is “He Died At Home.”  Morse hits straight to the heart with the track, a biographical tale about a soldier who took his own life as a result of post-traumatic stress disorder.  The video is gut-wrenching and the song itself an emotional one.  Morse performed this song live at the last Morsefest and there was not a dry eye in the house.

There are some light-hearted, upbeat moments on the album such as with “Selfie in the Square,” a song about wishing your loved one was with you while traveling, but since they are not you send them pictures of yourself with your phone (something most people can relate to).  Another great track is “Manchester,” a playful tune complete with a chance for the audience to sing-along.  While the first part of the song sings “Manchester by the sea,“ referring to the city in England, there is a funny twist in the song that makes the track even more charming.  Meanwhile, “Lay Low” is a country-tinged tune that would have sounded at home on Morse’s last singer/songwriter album from 2014, Songs From November.

Neal Morse is one of music’s most gifted and talented songwriters and composers.  While he has cemented his place in progressive rock as a true icon, it is clear he can write a great song in any format or genre.  And while most of us are awaiting the results of the recent Neal Morse Band’s writing sessions, which are under way, this album is a worthy addition to his extensive catalog.

Neal Morse is hitting the road for a series of solo shows beginning on the Cruise to the Edge Feb 3-8, 2018.

For a complete list of tour dates go here.

You can read about many of Neal Morse’s albums in Essential Modern Progressive Rock Albums.