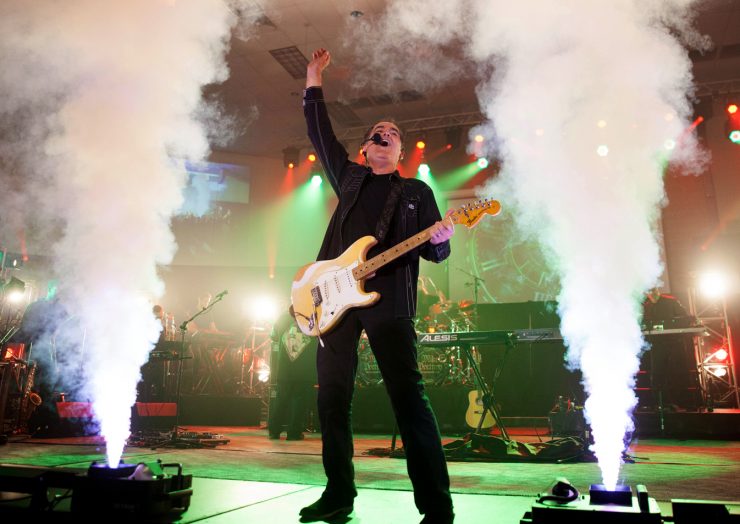 Progressive rock invaded Tennessee this Labor Day weekend as it was once again time for Morsefest, Neal Morse’s weekend of prog in his hometown of Cross Plains, just outside of Nashville.  This was the 4th such weekend, which is rather shocking considering Nashville is not exactly the hotbed of prog. For anyone that doesn’t know, the Morsefest weekend consists of Neal Morse playing 2 of his albums on consecutive Friday and Saturday nights.  In 2014, it was Testimony and One.  In 2015, it was the ‘?’ album and Sola Scriptura. Last year, the unbelievable happened as Spock’s Beard reunited with Neal Morse and Nick D’Virgilio to perform Snow for the first time ever. This year the festival returned to its namesake as the now Neal Morse Band were set to perform Testimony 2 on Friday night and the mammoth Similitude of a Dream on Saturday night along with the usual addition of long epics and surprises. For anyone in attendance, the band and the weekend did not disappoint. 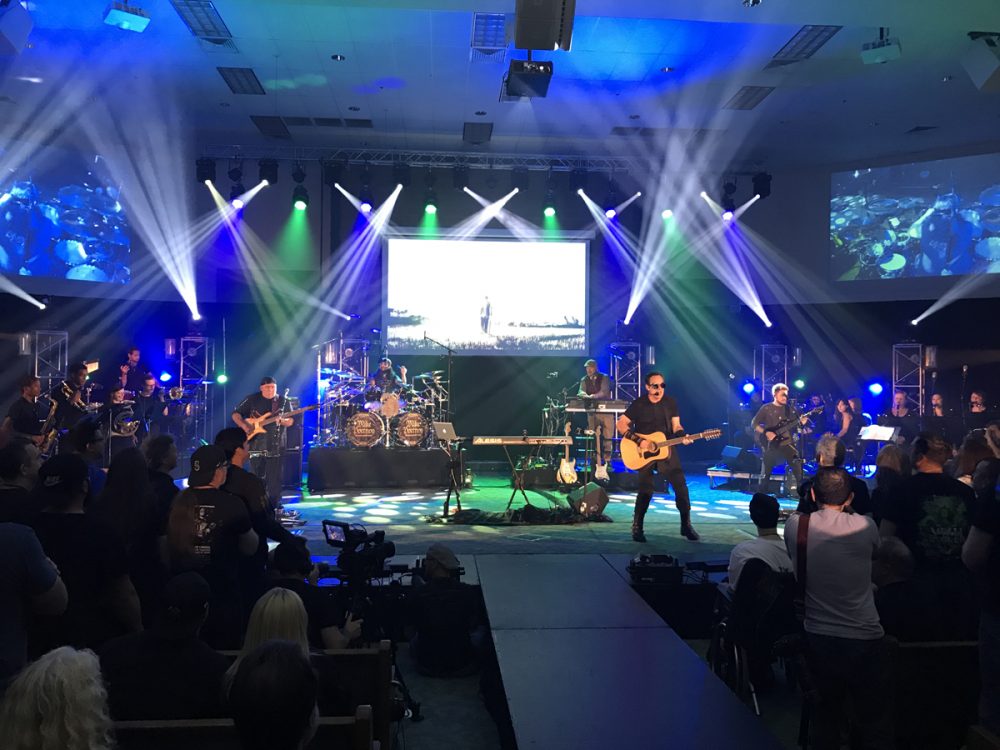 Having had the privilege of attending Morsefest two prior times, in 2015 and 2016, it is hard to come up with new words to convey the awesomeness of what this weekend is. To say that it’s just for overzealous Neal Morse fans would be to shortchange what has become a beautiful community of prog fans from all over the world. Since its inception in 2014, not only have the audio and visual elements grown beyond any expectation, but the festival has repeat visitors, many for the 4th consecutive year; fans who have become friends in the interim staying in touch on Facebook and planning the trip to Cross Plains together, with attendees from as far as Iceland, Japan, China, and South Africa just to name a few places. This time a couple even got married Saturday morning.  It has become that type of family event. 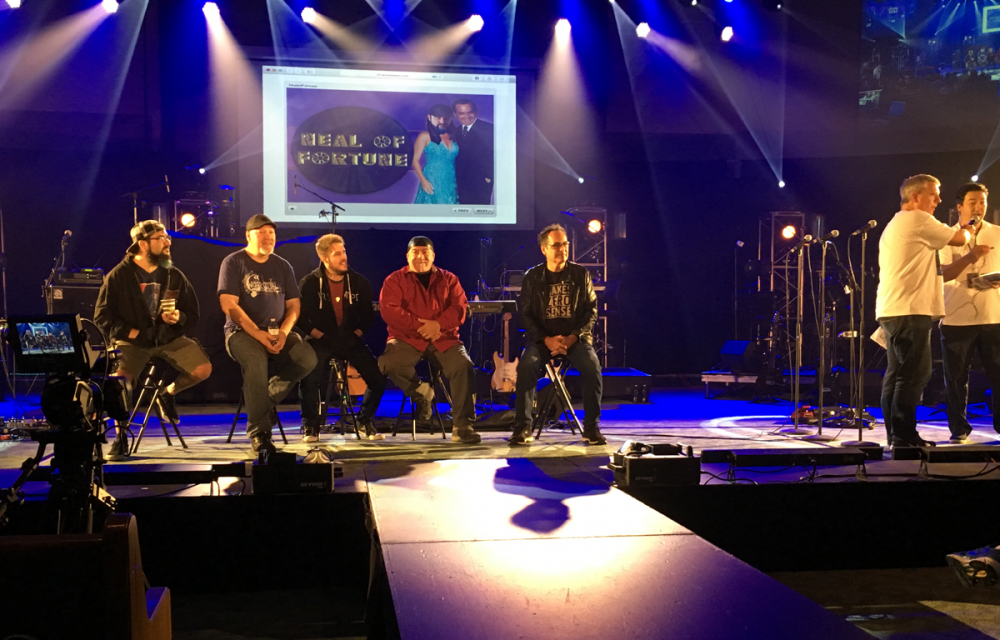 The weekend is exactly that, a full weekend from Friday afternoon to Sunday morning, where barely a minute is left unaccounted for, other than to get a quick lunch.  Friday and Saturday afternoon both began with a VIP session where the band played a take-off on Wheel of Fortune called “Neal of Fortune”.  Guests from the audience were picked to complete and win prizes while trying to figure out difficult answers like Randy George’s solo album “In the Light of the King’s Countenance”.  From there, the band did a signing session where each fan got to speak with each member and get anything they wanted signed.  This lasted over an hour.  Then they took pictures with each person.  Once this 3 hour meet and greet was over, the band ran through a sound check before letting the full audience back in. Meanwhile, the VIPs in attendance were fed a nice dinner down the hall. 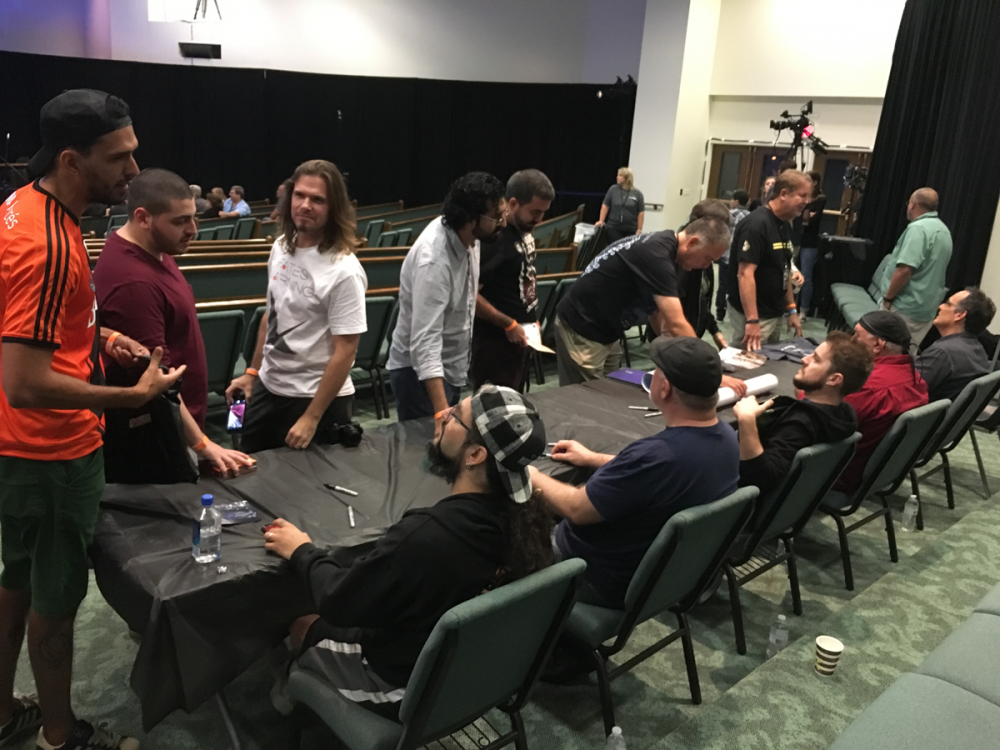 As announced a few months earlier, Nick D’Virgilio was scheduled to open each night but no one really knew exactly what would take place.  Friday night he appeared with songwriter Stan Ausmus, a long-time Spock’s Beard collaborater, and the two ran through a variety of acoustic choices from the Octane track “There Was a Time” to Nick’s own “Mary Jane Says”. Nick surprised everyone by singing a Big Big Train song “Telling the Bees”.  The set closed with a tremendous version of the Spock’s classic “The Doorway”.  It was a great way to kick off the evening. 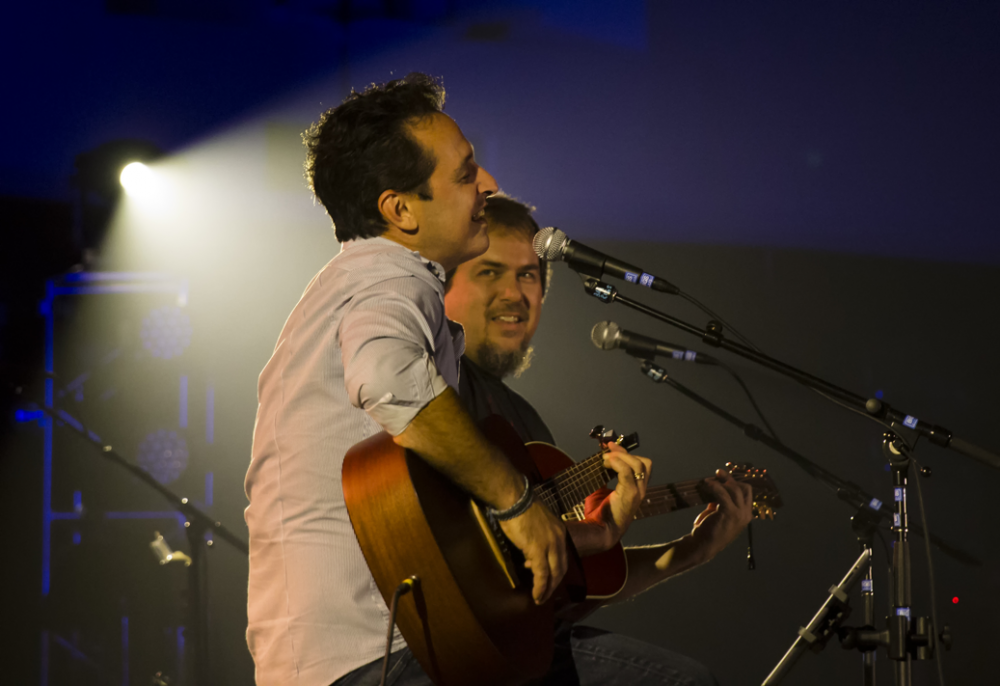 Neal Morse along with Mike Portnoy, Eric Gillette, Bill Hubauer, and Randy George, took the stage and jumped into the title track from the Lifeline album. From there, they played two 30-minute epics “So Many Roads” and “Seeds of Gold”, only taking a break between to the two to do a rousing acoustic rendition of the song “Supernatural” with Bill playing the lead on mandolin. The group segued into an impromptu version “I’ve Seen All Good People” inviting the audience of 700-800 people to sing along. Both “lost” epics were truly “Epic” but it was “Seeds of Gold” that had everyone on their feet by the time it was over.  Gillette filled in on the Steve Morse solo proving he doesn’t need to take a back seat to any guitar player. 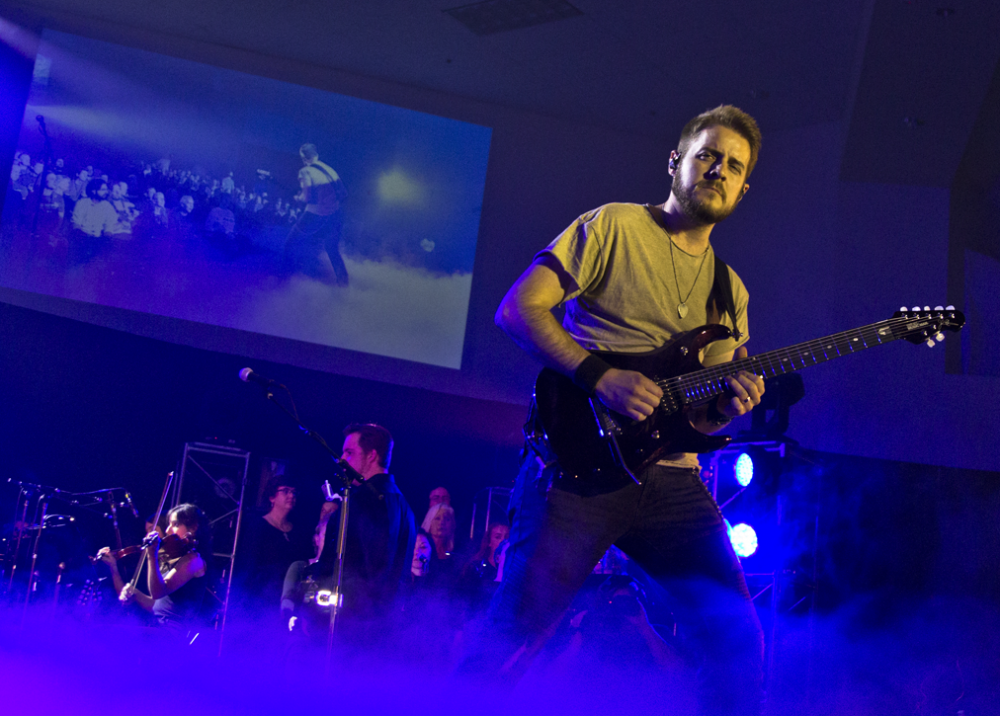 After a short break, the band returned to perform the album Testimony 2. From the opener “Mercy Street” through the challenging “Time Changer” the band were flawless.  The addition of a horn and string section, along with a choir, elevated the proceedings to another level.  Morse than performed “Jayda” the story of his daughter’s miraculous recovery from a heart defect as a baby.  The emotional Morse was in tears at the end as his daughter ran onstage to embrace him.  There was barely a dry eye in the house.  The band then tore through the rest of story, recanting how Morse decided to get off the road, and leave Spock’s Beard.  Epic moments like “The Truth Will Set you Free” and “It’s For You” were pure prog ecstasy. The closing track “Crossing Over” was a beautiful conclusion to the evening as everyone stood in awe of what they had witnessed. 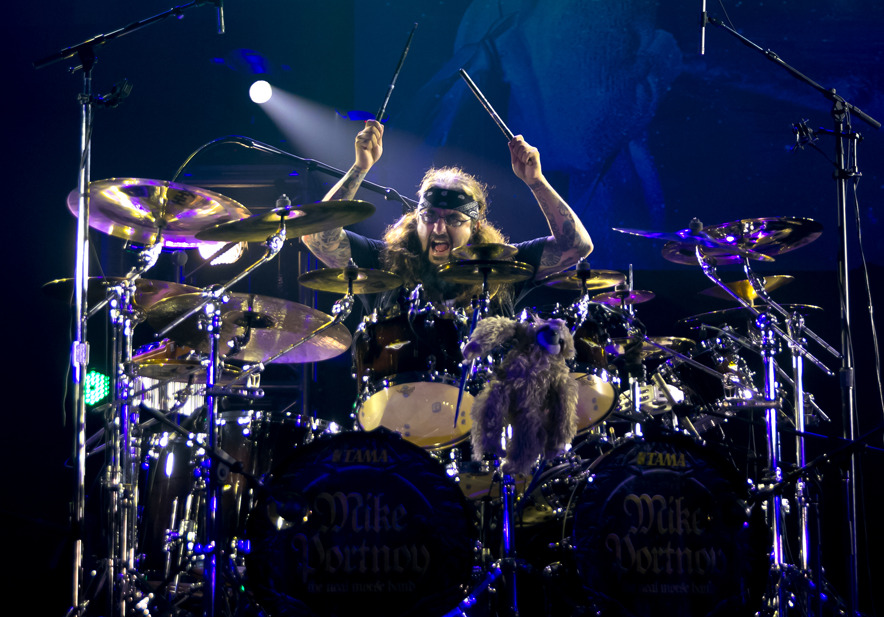 Saturday began early for the few hundred Inner Circle members, Neal’s fan club, who were treated to a private acoustic show by Neal, who was only joined briefly by his son Will and female vocalist Julie Harrison. The relaxed set was made up mostly unreleased material, some new, that Neal had written upon the band’s recent European tour. One called “He Died At Home” told the tale a soldier who took his own life as a result of PTSD, a truly sobering moment that left most grown men claiming they had something in their eye..

After another VIP session Saturday afternoon, the lines began to form around the New Life Fellowship Church, where the weekend was held. The merch table was overflowing with guests purchasing anything from Cds, Dvds, and shirts designed specifically for the event, the most popular being a shirt that said “Makes Zero Sense” a reference from the song “Makes No Sense” from the Similitude album. For any non-prog fan that sees the shirt outside of Morsefest, the shirt will most certainly cause an on-looker to agree with that sentiment. 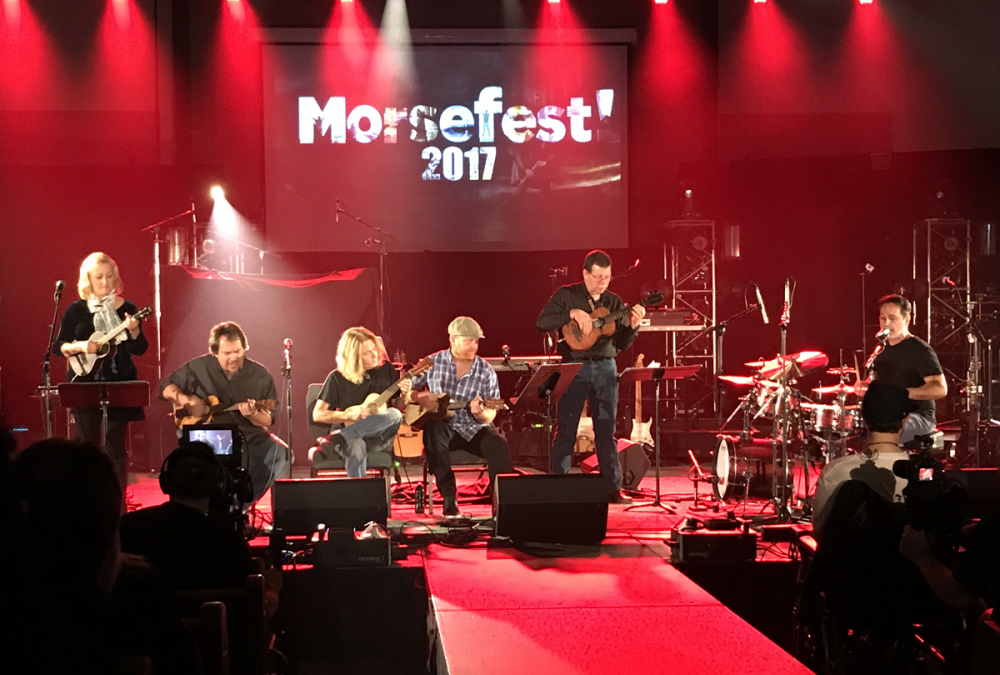 This night began with another Nick D’Virgilio performance, this time with a unique performance with his band UniKue, a group made up entirely of Ukulele players.  The group of 6 members, with Nick on drums, was a real treat, one perfectly designed for this audience.  Playing songs like “Closer to the Heart” and closing with “Roundabout”, the group surprised everyone with how creative and spectacular this group of ukulele could be. 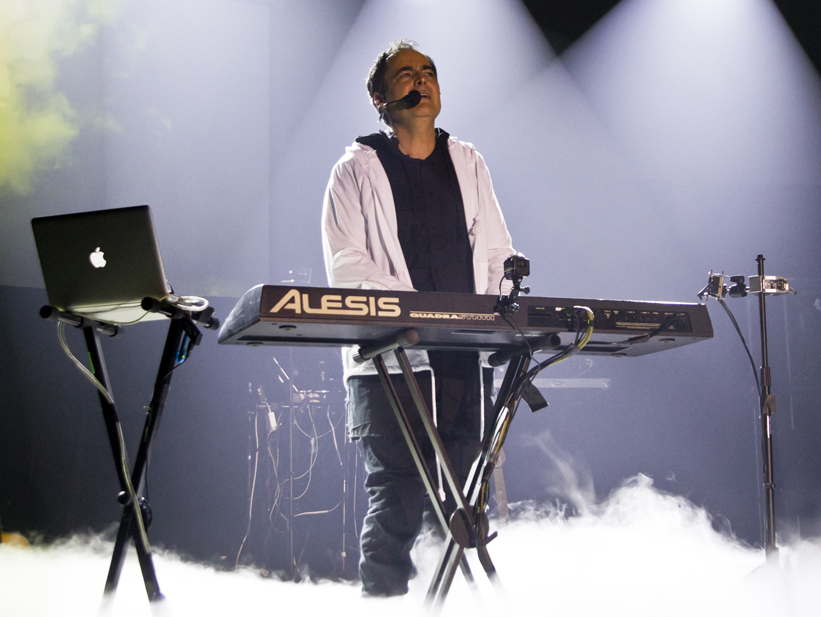 Then came the Neal Morse Band again, ready to perform their highly successful double concept album from last year, The Similitude of a Dream.  They had been on tour for the last few months performing the album in its entirety.  The tour coincidentally began in Nashville and now the band were set for their 50th performance of the album, which would also be the last show of the tour.  They would send the album and tour off in grand fashion as a band of about 20 players, professional lighting and video teams, sound-man extraordinaire Rich Mouser, video designer Christian Rios and a cast of dozens more, put on the show for the ages. For anyone that had seen these band on this tour before, it was like seeing it for the first time. 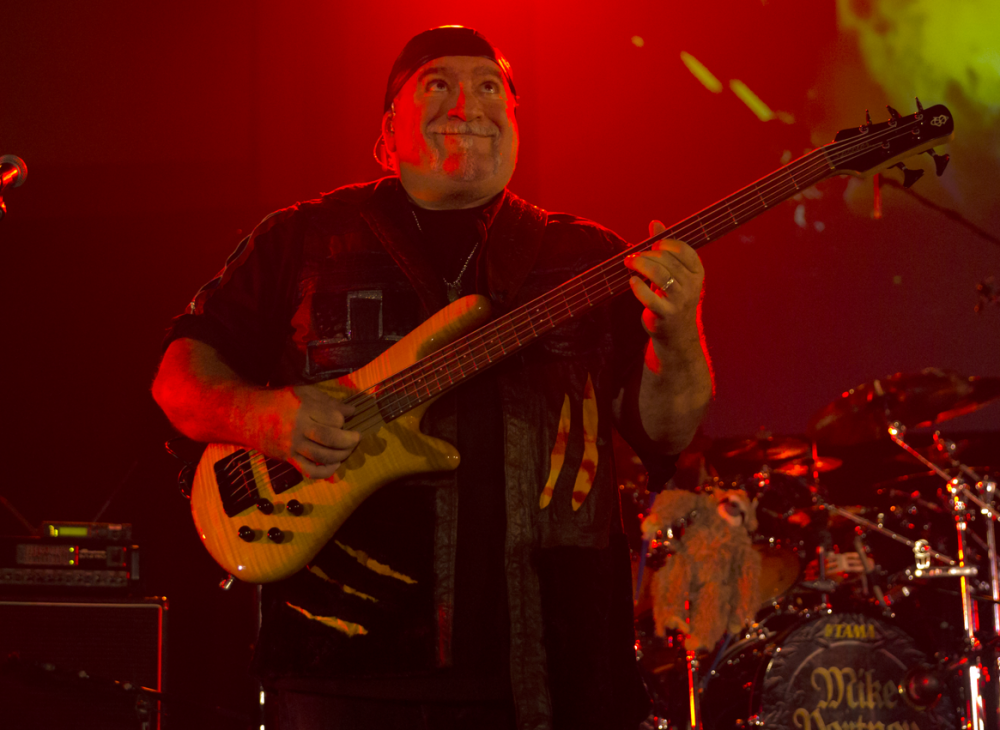 Neal, Mike, Bill, Eric and Randy, were in complete synch from the opening of Long Day and did not speak to the audience until halfway through the second act. Highlights from the first act included “Makes No Sense”, Bill Hubauer’s “The Ways of the Fool”, the rocking “So Far Gone” with Eric Gillette leading the way, and the grand “Breathe of Angels”. The choir was a glorious addition to an already transcendent number. Act 2 brought on a few “Sloth” masks in the audience when that song came on as Neal slithered across the floor.  The closing sections beginning with “The Mask” through “Broken Sky/Long Day (Reprise)” kept the audience standing and overwhelmed by the magnitude of the performance. The group returned for the encore of “Author of Confusion”, “Agenda” and “The Call”.  It was a perfect ending for this long tour that has cemented the Neal Morse Band as a major force. 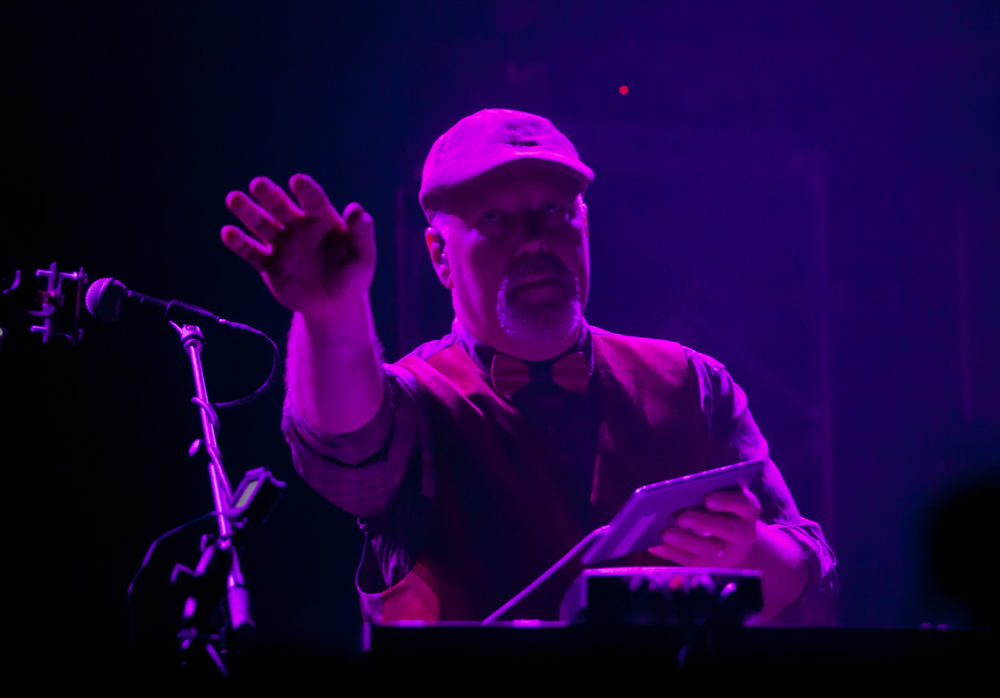 Sunday followed with 2 church services by Neal to round out the weekend. And there it was, another Morsefest in the books. Amazing production, amazing performances and an all around great time. While the music, as expected, was incredible, it was the fans and community of proggers that made this weekend so special.  Neal and the band, along with Joey and Amy Pippen, organized a great weekend for all involved and left everyone excited about the next one. It is rare to get such an intimate experience with a band like this. Let’s hope it’s not too long until it happens again. 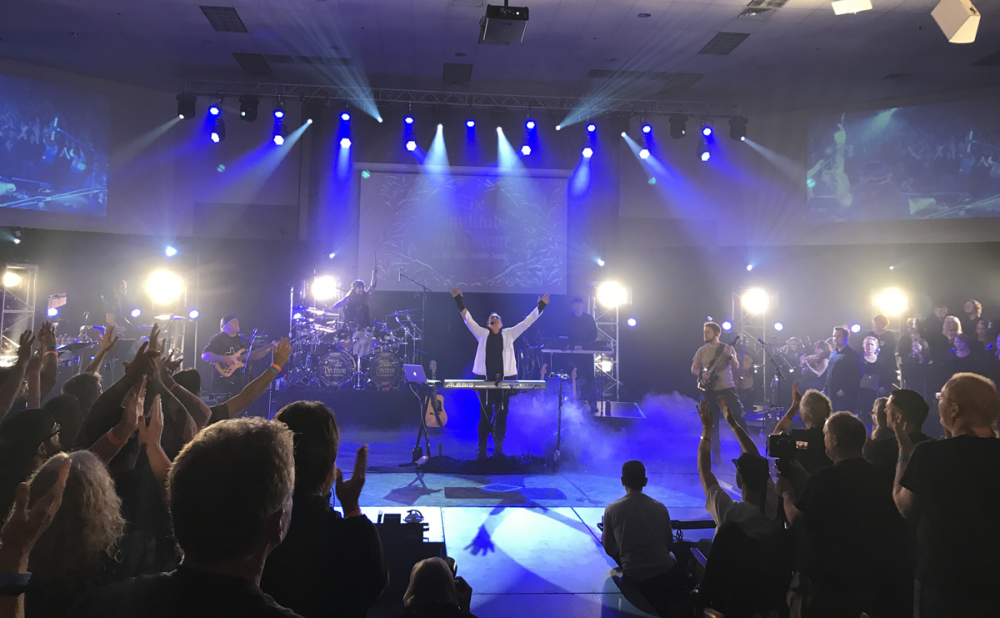 Lifeline
So Many Roads
Supernatural (Acoustic)
Seeds of Gold
Testimony 2

The Similitude of a Dream
Author of Confusion
Agenda
The Call