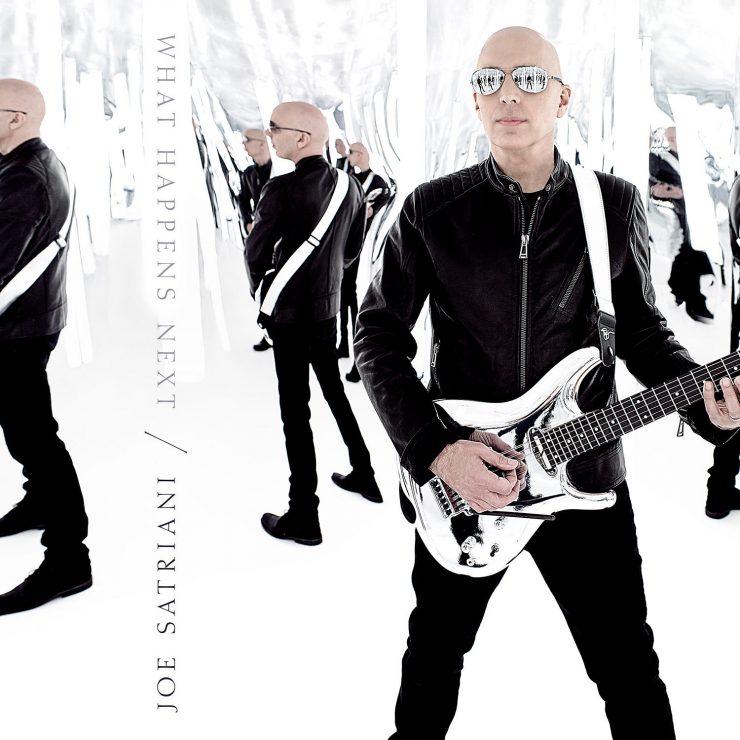 Review of the new Joe Satriani album, What Happens Next, out on Jan 12th, 2018

Guitar icon Joe Satriani has been on a role this millennium, releasing album after album and touring relentlessly.  One would wonder what does a guy who has written and recorded some of the best instrumental guitar music ever still have to say.  With he 16th studio album, What Happens Next, Satriani proves he has the answer to that question.  What happens is he releases one of his best albums in years.  Following the conceptual Shockwave Supernova in July 2015, Satriani has stripped things down and the results are outstanding. Joining him are two legendary musicians in their own right, Glenn Hughes (Deep Purple, Black Country Communion)  on bass, and Chad Smith (Red Hot Chili Peppers, Chickenfoot) on drums.  This stellar rhythm section sets a foundation that sways from groovy to funky to rockin while allowing the guitar master to do what he does best.  Each of the 12 songs on this collection offers something unique and engaging, making this a thoroughly enjoyable listen.

The album kicks off somewhat expectedly with a Satriani-esque riff just before Smith and Hughes kick things into high gear.  Satch’s again uses the guitar as his singing instrument, providing simple, gorgeous melodies in the verse and chorus, eventually making way for his explosive solos. But this song is really just setting the stage for what’s to come.  With the second track “Catbot” is it right away apparent that despite this being a rock trio album, this not a 4-chord rock record.  There is definitely more a groove on this track over a industrial distorted bass by Hughes which provides a sinister tone.

The highlight of the album is the 3rd track, “Thunder High on the Mountain,” where Satch finger taps his way over a tribal groove set by Smith.  This song sounds huge, from the opening toms, to the heavy rock explosion, to Satriani’s beautiful solos that take the listener on a aural journey.  The tribal feel continues with the following track, the ballad “Cherry Blossoms’ which finds Satriani delicately playing over what sounds like a drum loop.  The syncopated strings that swap moments with Satch’s guitar are unlike anything the guitarist has put to record before.  Another brilliantly unexpected track.

Things kick back into gear with the melodic “Righteous,” a song that is the most Satriani sounding track on the record.  It is really tough to believe, but there is no good place to stop listening to this album.  The great tunes just continue with “Smooth Soul,” a bluesy number with the most exquisite soloing, it is almost too good to be true.  All the while, props have to go to Hughes and Smith who play just perfectly on this album, providing just the right mix of groove and shred to make this all work as good as it does.

Things continue in rocking fashion from there but at this point you need to explore the rest of this album for yourself.  Joe Satriani has once again proven that he has more to say and continues to produce great album after great album.  Few artists can say that upon putting out their 16th album.  ‘What Happens Next’ is phenomenal in every way from an artist that is no where near finished, in fact, he sounds like he’s just getting started.