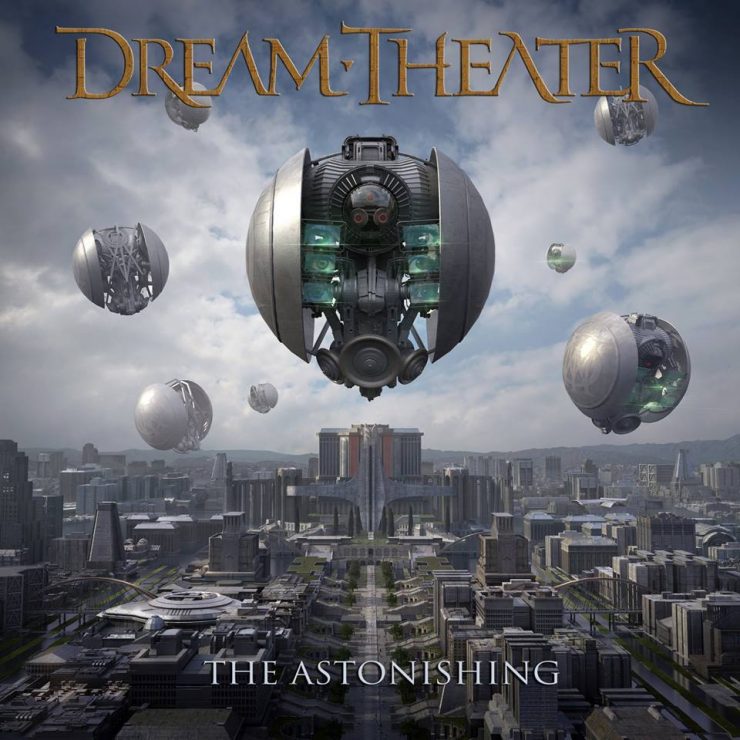 Review of the new Dream Theater album “The Astonishing” on Roadrunner Records.

With the abundance of new albums that are released these days, it is hard to get too enthusiastic over one release.  It is uncommon to achieve the kind of anticipation that there used to be when a new cd was due to come out and few artists are able to generate such excitement.   Within the Prog genre, Dream Theater are one of those bands, and with their upcoming new album, they have certainly set the Prog world on its collective ears.  Few bands in the Prog genre have been able to sustain the career that Dream Theater has.  In fact, over the last 10 years their popularity has continued to grow.  There have been larger tours, top 10 albums and even Grammy nominations.  Now, 6 years removed from the departure of founding member and original drummer, Mike Portnoy, Dream Theater step up to the plate with their most ambitious studio effort in their almost 30 year existence, the 2-disc rock opera, ‘The Astonishing’, due out on January 29th. The band has slowly been revealing information over the last couple of months about the story and characters helping to build the intrigue about the album. They have also announced tour dates in which they will be performing this rock opera in its entirety.  It has been slightly over two years since Dream Theater released their self-titled album, one of the more successful albums of the band’s illustrious career.  However, while indeed “astonishing,” this new project might stand to be its most polarizing to date.

Already billed as a rock opera, the expectation, from what they have been revealing, is for something along the lines of their previous concept album Scenes From A Memory (highly regarded as their pinnacle) meets Tommy, The Wall, or Operation Mindcrime. All of these are timeless, epic, concept albums which set the bar unreachably high.  Yet, Dream Theater almost pull it off. Let’s be clear; this is an incredible achievement. The scope of this album is something to behold. Very few bands could produce such an album. The production, orchestration, and musicality are all top notch, and it is epic beyond epic.  On the surface, it is everything a Dream Theater fan should treasure. However, with all its wonders, for some it might simply be too much and too long.  With 34 tracks spread out over 2 discs and over 2 hours of music, it is a lot to absorb and impossible to do in one or even a handful of listens.

John Petrucci’s story and concept is not for the faint-hearted, ADD, casual listener. The story is about a future land in which music is only done by machines as controlled by the empire; however, a small band of rebels hold onto and fight for the hope of true music.  The story is complex and there are a number of characters.  Labrie does the brunt of the work here, singing the parts of all the characters, tackling the different styles and ranges in his most accomplished recording. As mood and themes are introduced, there is a familiar atmosphere a la Six Degrees. The production is signature Dream Theater as carried out once again by Petrucci.  Sonically, Rudess seems to be most up front on this album.  There is an abundant use of pianos, strings and weird sounds.  There are the usual instrumental surgical chops the DT community expects, and the cooperative soloing efforts of Rudess and Petrucci are as assimilated to each other as ever.  The guitar solos have a great mix of virtuoso chops and melodic maturity and beauty. John Myung and Mike Mangini continue to provide the solid foundation which allows LaBrie, Petrucci, and Rudess to shine, although, missing is the overall playing creativity and interaction of drums and bass—perhaps this is necessary when delivering such a long and epic production.

This album might not be what every Dream Theater fan is used to getting from the group.  It takes several patient listens from beginning to end to come to grips with the entirety of the music. There is excellent music; however, complete songs are largely absent here.  It is not an album where it is easy to pick out 3-4 songs you can listen to repeatedly at first. The case for the 34 songs is defended by a significant amount of transitions and filler material for the purposes of theatrical continuity; however, the songs have a tendency of becoming homogenous as the music progresses the story onward.  As in any musical or Broadway play, there are repeated themes, altered by various characters and tempos throughout.  In a theater setting, this is necessary.  But listening while driving or working on a computer without total focus, the effect this is meant to achieve instead often results in, “haven’t I heard this part before?” Maybe this says more about the lack of attention span this current generation is afflicted with.  A shorter, more condensed collection could have resulted in an even better musically intense experience and historically rank higher among DT enthusiasts (see suggested playlist below).

There are moments where the band is at its Prog best and there are a number of tracks that indeed are memorable. The album’s first single and main opening track, “The Gift of Music” is replete with virtuosity and melody, and does a nice job setting the tone. One of the best tracks “A Life Left Behind” kicks off with a brilliant acoustic piece by Petrucci before jumping into a nice jazz motif seemingly lifted from a Rudess solo album.  The hook in the chorus here is the best on the album.  “Chosen” is one of the more outstanding power ballads the band has ever written and is one of those repeated melodies that appears throughout the album. It should be the audience cellphone lighting moment of the show.  “A New Beginning” is the first disc’s most metal track and the long extended guitar solo here is one of Petrucci’s best on the disc, exuding loads of bluesy improvisation.

Disc 2 kicks off with the rocking “Moment of Betrayal” which is destined to be the song most Dream Theater diehards will pick as their favorite.  Much of the rest of disc 2 is tasked with moving the story along.  There are few fully fleshed out songs, rather more parts that lead into other parts, outside of “Our New World” which is ready for radio single treatment. All this leads up to the epic closing title track which brings everything to a climactic ending.

Part of the curse of being a long time top band is the burden and pressure of living up to the expectation of their own past masterpieces. Not only have DT set the bar at its highest level with their past classics, other bands have raised their level of musicality as well.  Dream Theater’s efforts with ‘The Astonishing’ should be appreciated and admired as they continue to push themselves to try to be beyond what they have done in the past. Their desire to perform the album live in its entirety should turn out to be a worthwhile experience.  While not a perfect album and not their best work, it is a worthy addition to an already “astonishing” catalog, even though it will take some real investment of your time.

Key Tracks: A Life Left Behind, A New Beginning, Moment of Betrayal, Our New World