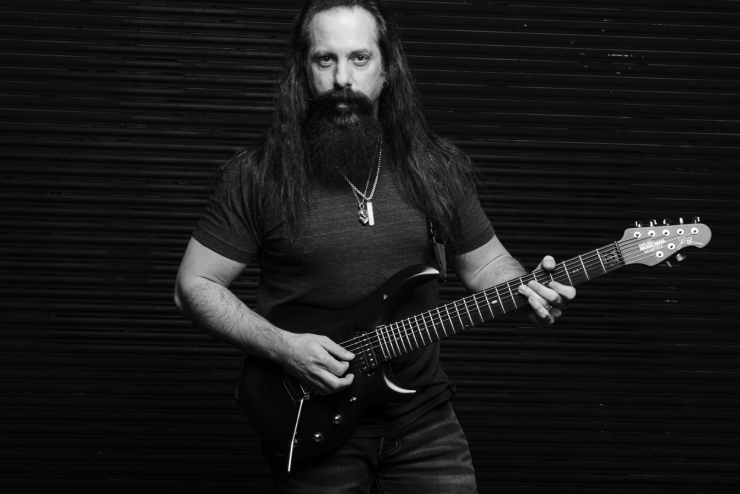 Dream Theater are currently on the North American leg of ‘The Astonishing’ tour.

We were able to catch up with Dream Theater’s John Petrucci on the eve of the band’s first North American show for ‘The Astonishing.’  Here is what we had to say about the tour and the challenge of putting on such an elaborate production.

You just finished the Europe dates. Tonight is the first show in Canada and then US in a few days. How has the tour been so far?

Yes, we’re in Quebec City. We had a great time for about 5-6 weeks in Europe playing venues that were really special and unique that we really never played before over there so that we could present this show in a way that it deserves to be presented. So we were like 2-3 nights in select cities playing opera houses and symphony halls and really just cool places which made the events, not only for us but for the fans, really special and it went great. Now in North America, we have 3 shows in Canada and then we move on to the states.

Have you come across any challenges or surprises that you didn’t expect now that you are playing this every night all the way through?

The challenge of the whole thing was that this was originally written to be a show, that was the plan all along. It was a very ambitious plan cos it really meant that not only did we have to write over 2 hours of music for the actual audio portion but we had to come up with all of this visual content and stage design. It was all kind of happening at the same time. So the biggest challenge was getting so much content done both musically as far as writing, recording, writing lyrics, all the orchestra and choir and all the work that was involved in getting the visual presentation done, all that live content.

The surprise to me as a guitar player was how long it would take to get it all memorized. The music is very different and it doesn’t follow the traditional guitar trajectory. I feel like I’m more playing classical lines which kind of twists the brain up a bit. So the surprise for me was the amount of time in preparing that.

James Labrie has received a lot of praise for his handling of all the parts and for his performance on this album. That must be rewarding for him and the band. How is it performing all of those parts live each night?

He really stepped up and just delivered his best work to date as a vocalist. He had a really tough job. There’s so many lyrics, so many parts, 8 different characters and he embodied all of them and just did an amazing job and he’s continuing to do that live. I know for him it’s a lot of preparation. During this show he’s singing more than he would during a normal Dream Theater show because of the narrative, It’s rock opera type of thing, so the words and the storytelling is very important so he actually had a bigger job. He’s been doing a tremendous job on stage and I’m so proud of what he did. It’s really incredible.

How amazing is it for you to see the growth of the band’s audience 30 years into it? Usually it is the opposite for a band this long into their career.

We are in a very unique, fortunate and special position as a band because we didn’t really have a lot of singles success, radio success. So fast forward 30 years later, we’re not a nostalgia type band. There are some bands that had so much radio success that when people go to see them live, they really just wanna hear those songs that they all know. And there is something really cool about that but I know for bands like that it’s very hard for them to present new music. For us, we built a career in where we gained fans as we went along throughout the world. We’re in a position now and have been and it continues now where we can put out new music and people are just as excited if not even more excited to hear what the new music is and what the new show will present and they’re open to new experiences and new offerings from us and as an artist I love that because it means all my creative energy doesn’t go unappreciated and it’s a really great feeling that the band has.

There’s plus and minuses with all the ways that musicians and bands have success. But I’m very thankful for the way that we’ve been able to do it. Fast forward 30 years later, the band is more popular and stronger than ever and coming out with what I think is our best work to date, so its fun. We’re very thankful for the position we’re in.

***Dream Theater are currently on the North American leg of their tour.  The Astonishing debuted at #11 on the Billboard charts. Read our review of the album here.