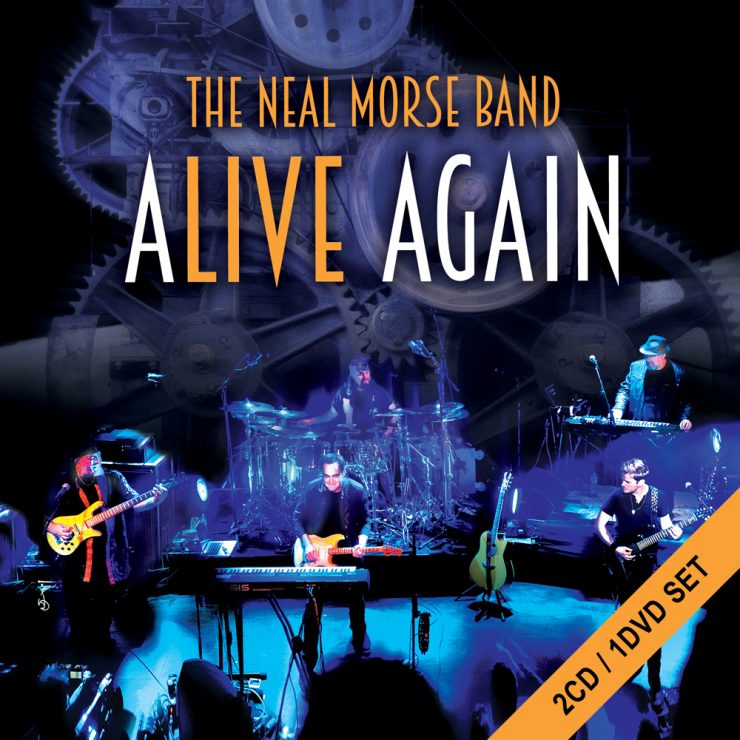 The Grand Experiment, the Neal Morse Band’s 2015 release, was one of Morse’s most successful and celebrated releases and in seeing the live DVD from the ‘Alive Again’ tour, it’s no wonder.  The group consisting of Neal, Mike Portnoy, Eric Gillette, Bill Hubauer and Randy George sounded great on the album and are even better live.  The DVD finds the band in top form at a show in Holland at the tail end of the ‘Alive Again’ World Tour.  Few bands can top these group of musicians and for anyone that failed to catch them live on this tour, this DVD is as as good as you can get.  The show is filmed up close and intimate. The venue is packed with 1000 or so die-hard fans and the vibe is one of fist-pumping joy. The set is filled with songs from the last album, with a few rarities and some spiritual numbers providing something for every segment of Neal and Mike’s fan bases.

As the intro music ends, the group immediately dive into the a-cappella opening of “The Call,” the epic opening track from ‘The Grand Experiment’. If ever there was a song that in 10 minutes encapsulated what this band is about, it’s this song. Each member has a brief section to shine along the way and by the time the ending chorus returns, the audience, and the person sitting on their couch watching, is strapped in for the long ride.  Following the rock tracks “Leviathan” and “The Grand Experiment” is a real deep track from the Spock’s Beard era, “Harm’s Way.”  Even the lost Beard songs are special and this 14 minute number is equal to all of the celebrated tracks.  Great of Neal to shine some light back on this one.

Following a brilliant keyboard solo by Bill is “The Creation”, which at this point is one of the staples of Neal’s solo catalog. Neal falls to his knees to finish the track and gets visibly emotional at the end.  Mike introduces the acoustic set, where Neal sings “There Is Nothing That God Can’t Change” before the full band joins in on “Waterfall”.  The latter is truly one of the set’s highlights and showcases the wide-range this band possesses.  Eric Gillette gets his shot at a solo, as the intro to “In the Fire,” another deep track from the ‘?’ album.

The signature performance of this tour comes in the form of the 35 minute epic “Alive Again” from the last album.  For some bands, this song could be a set, but for this band, it is a walk in the park.  They weave their magic through each section with ease, each member stepping up when called upon.  Bill Hubauer and Eric Gillette’s vocals here are a spectacular touch by Neal to add to the band.  The band take some time in the middle to have some additional fun by switching up instruments.  Mike jumps on the bass, while Eric shreds on keys with Neal on drums.  And the musical chairs continues as Eric does his Portnoy impersonation on the drum kit as Randy George shreds on guitar.  It’s enough to make an aspiring musician throw his hands in the air as if to give up. The song closes on the epic ending to close and leaves you breathless.  The encore is culled mostly from Testimony and One with the band closing on the anthem King Jesus.

As with all of Neal’s albums and DVDs, there is a behind the scenes video that shows the band dealing with the spinal tap moments like the fan falling off the road in the snow, more serious moments like Mike needing to go to the emergency room minutes before a gig in Europe, and all the other trappings of being on the road.  It is a great glimpse into the bond that these guys share and how much the music makes it all worthwhile.

The Neal Morse Band are a force of nature. They have evolved into a great live band, one that is as good as there is in music and they really shine on this live set.  The performances here are jaw-dropping and might have you giving a standing ovation from your couch. Take a bathroom break before you start too, because once you start watching, you won’t be able to stop.