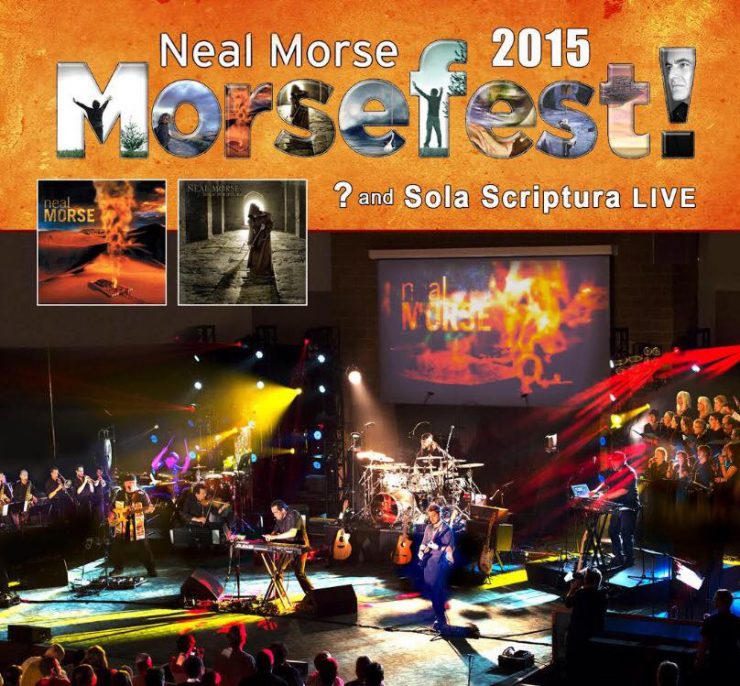 So much news is surrounding the Neal Morse Band these days, from the recent success of The Similitude of a Dream album and tour, to the announcement of Morsefest 2017, and now in between comes the release of the live set from Morsefest 2015, due out on March 24th, 2017.  This, the 2nd Morsefest weekend event, took place in September of 2015, less than a year after the first one. This live set, which comes in CD/DVD and Blu-Ray, contains music and footage from both nights where the band performed 2 of Neal Morse’s solo album, ‘?’ and ‘Sola Scriptura’, along with a number of extra tracks from Neal’s entire career. This is as good a collection of live footage and progressive rock any fan could imagine.  With over 5 hours of music, just watching this can leave you exhausted.  It is unbelievable to imagine how these musicians pulled this much off in just 2 nights.

I was lucky to spend that weekend there and wrote a lengthy review of the weekend (read the Morsefest 2015 review here), so I will not recount all the songs and surprises, but suffice it to say it was nothing like I had experienced musically, until of course Morsefest 2016, but that’s another article.  One thing that you can count on with releases from Neal Morse and Radiant Records, is they give you every bit they can.  The CD/DVD package comes with 6 discs, music from both nights and an hour behind the scenes documentary.  The visuals are spectacular and the sound, courtesy of the always impressive Rich Mouser, is flawless.  Most live DVDs have a few cameras, but the production here is a step beyond even that; nothing is missed, and it looks brilliant.  Of course, musically, the band are as good as always.

This is a collection for the die-hard fan.  There are many obscure album cuts and b-sides performed from Neal’s time with Spock’s Beard, his early solo career and even a crazy version of MacArthur Park, from The Grand Experiment album.  But the highlight is definitely the end of the second night where Neal’s old Spock’s Beard bandmate, Nick D’Virgilio, joined the band for “At the End of the Day” on drums and then “Wind at My Back” on vocals.  For fans there, it might as well have been McCartney and Lennon reuniting.  As if that wasn’t enough, the band then followed that with a 20 minute performance of The Whirlwind from Transatlantic.

You get the idea.  It’s a lot of music.  Credit to all who were involved, from the musicians to the people putting the production together.  Regardless of how you view Neal’s music, there is no denying the quality of what is presented here.  So sit back, watch, listen, and enjoy this Prog extravaganza from some of the best musicians on the planet, performing some incredible music the way it was meant to be performed.