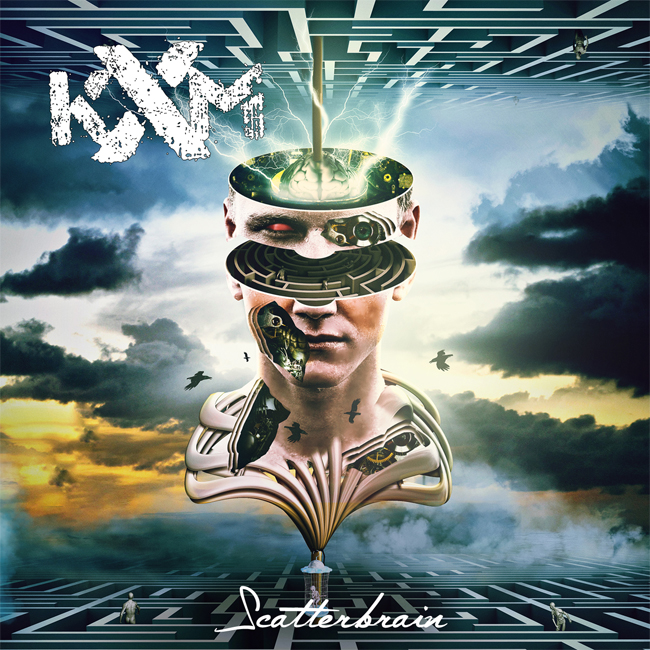 Supergroup KXM, featuring the trio of dUg Pinnick (King’s X), George Lynch (Lynch Mob), Ray Luzier (Korn), are back with a new album, Scatterbrain.  The follow-up to their successful debut from 2014, finds the band continuing along a similar path but expanding upon their brand of Hard/Prog Rock with more intensity and a few musical surprises.  There is no denying these three stellar musicians gel together like few side projects can.  Interestingly, while Pinnick possesses the Prog cred, it is Luzier and Lynch that add just as much punch and technicality to the music, making for an intriguing mix.

The album opens with the hard hitting title track, a reference to the scattered nature of the band’s musical outlook.  Immediately the outstanding production is noticeable, especially Luzier’s signature drum sound that emphasizes the bass drums.  His use of double bass in unlikely moments adds to the aggressive nature of the track.  Luzier’s talent as one of rock’s best drummers is not recognized enough.

One of the album highlights comes with the second track, “Breakout”.  Generally, anything Pinnick sings will have a King’s X sound or vibe to it.  This track particularly so, with its use of dissonant vocal harmonies during the chorus, one of the signatures of his home band.  Pinnick sounds as good as ever belting out screams as if he was back in 1990.  Lynch’s guitar solo is melodic and captivating, fitting perfectly.  Luzier goes nuts on the drums during the fade out, worth checking out.  This is an outstanding track.

Throughout the album the group tear thru a number of hard rock songs, each with their own dynamic moments, from the chorus in “Big Sky Country”, to the reggae breakdown in “Not a Single World” wear Lynch supplies a tremendous solo, to the bluesy closing ballad, “Angel”.

KXM are the real deal, a group of musicians that are brilliant musicians and songwriters.  While not a Prog album necessarily, any fan of well played and produced rock will enjoy this album.  Get Scatterbrain and play it loud.