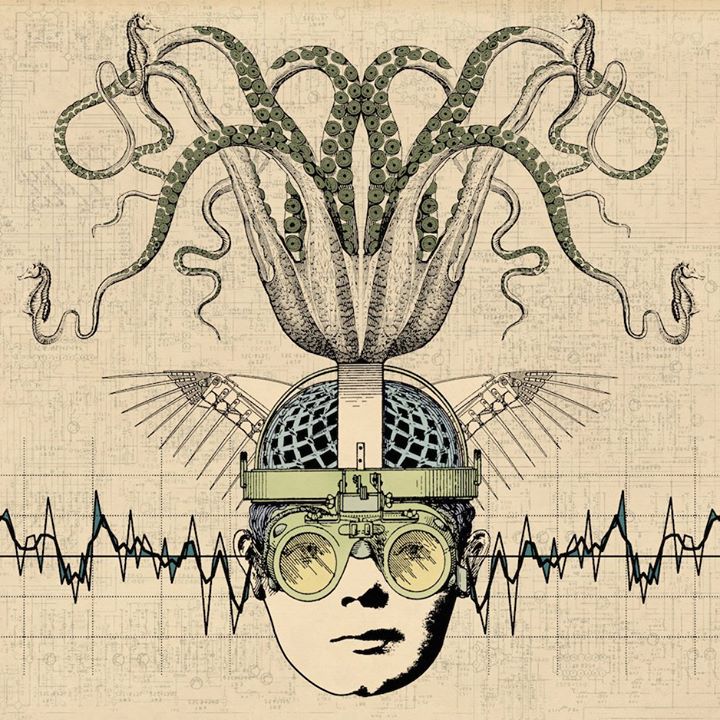 The first time I had the fortune of seeing Thank You Scientist was back in 2012 at a NAMM event where the band performed in a hotel ballroom for invited guests of a guitar brand.  The room was filled with about 100 people and many of us just sat on the floor.  It was definitely a strange vibe for a show and I had no idea what to expect.  It seemed there were too many people on the stage with instruments you do not normally associate with rock and metal.  For the next hour, I was simply astonished, as were most of the people there.  For most, it was the first time they had even heard of the band and every person left a fan.  Thank You Scientist are one of the few bands that after seeing them live, you immediately call and tell your friends, “You won’t believe what I just saw.”  This is probably the greatest compliment a rock band can hope to receive.  The challenge, however, can the band reproduce this energy on an album?  Their breakthrough album, ‘Maps of Non-Existent Places’ was close to achieving this and was even one of our Top 10 albums of 2013, even before it was remixed and reissued following the band’s signing to Evil Ink Records (the label run by Coheed and Cambria’s Claudio Sanchez).  The remix was significant in improving the sound of that album.  That and the band’s subsequent tour opening for Coheed has helped the band gain a substantial following and increased momentum for their highly-anticipated follow-up “Stranger Heads Prevail.’  With their latest, the band are ready to cement themselves among the great young bands around.  It is everything the band is, but bigger and better; bigger sound, better songs and a fun, crazy ride.

The opening Prologue is something straight out of the Queen or Jellyfish guide to opening an album. With lush orchestral movements and layered harmonies leading the proceedings, the listener is then treated to a subtle groovy bass line and finger snaps before the Brian May style guitar takes over.  It is a short 2 minute intro track, but sets the table perfectly for the manic horns and metal guitar that kicks off “The Somnambulist”.  This track is standard TYS-fare but what is most noticeable is the step-up in production.  For a band with so many instruments that all fight for space in the mix, to pull it off in such pristine manner is critical, and they accomplish that here.  Lead vocalist Sal Marrano is right up front and as clear as day.  His voice has the high register that is similar to that of Coheed’s but does not come off as a copy.  It fits the style of the music perfectly.

The whole band essentially functions as the rhythm section at one point or another.  Guitar genius Tom Monda plays so many notes even when laying back as rhythm guitar, it is hard to tell when a solo begins or ends, but it never seems out of place or forced.  The band have almost made it a point to mention that they do not focus on the technicality when writing, but rather write much of the music on acoustic guitars, focusing on the main melodies and choruses before opening up the flood gates on instrumentality.  This is clearly evident on tracks like “Caverns” and the gloriously funky “Mr. Invisible.”  The former is a brilliant hard rock track with a strong chorus that stays with you long after its over.

The winner for best track on the album is “Mr. Invisible”.  It is hard to imagine another band that could produce a song like this outside of Frank Zappa.  If Michael Jackson joined Dave Matthews Band and wrote a song with Geddy Lee, it might come close to sounding like this.  The main riff could have been on Thriller.  For a part-metal group to go funk, can be a risk that could come off as a disaster, but the band come off almost overconfidently comfortable in this style of music. The use of the horns, including a tremendous solo from Ellis Jasenovic on saxophone, along with drummer Odin Alvarez’s ridiculous playing, is just superb.  All that aside, the chorus is awesome and makes this a great tune all around.

First single “Blue Automatic” is another track that is based in a funky approach but covers a lot of ground.  The band are great at arranging, from the killer metal riff in the chorus with the subtle horns in the background, to the other-wordly guitar solo backed simply by bass and drums, the band seem to have a knack for knowing what to use and where to put it. This is showcased even more in the instrumental “Rude Goldberg Variations”, another song that makes a listener ask, “What are these guys thinking?!”  There are more incredible performances here like the trumpet solo by Andrew Digrius, Cody McCorry on bass, and Alvarez’s drum solo.

“The Amateur Arsonist’s Handbook,” is the closest to their last album, drawing similarity to their most well-known song “My Famed Disappearing Act.”  Another lesson in combining musicality with creativity, the penultimate track is another album highlight.  The group have a penchant for adding on a crazy ending to a song, which they do on many of the tracks, but none better than on this one.  They ultimately close out on the lullaby “Epilogue”, a sublime ending to an overly adventurous soundtrack.

Thank You Scientist have upped their game on this album and are going to be a big name, be-it in Prog, Metal, or whatever you want to call this music.  The playing is incredible but the songwriting is what sets these guys apart.  If you haven’t gotten to know this band yet, to quote singer Sal Marrano on Mr. Invisible, “What Are You Waiting For?”