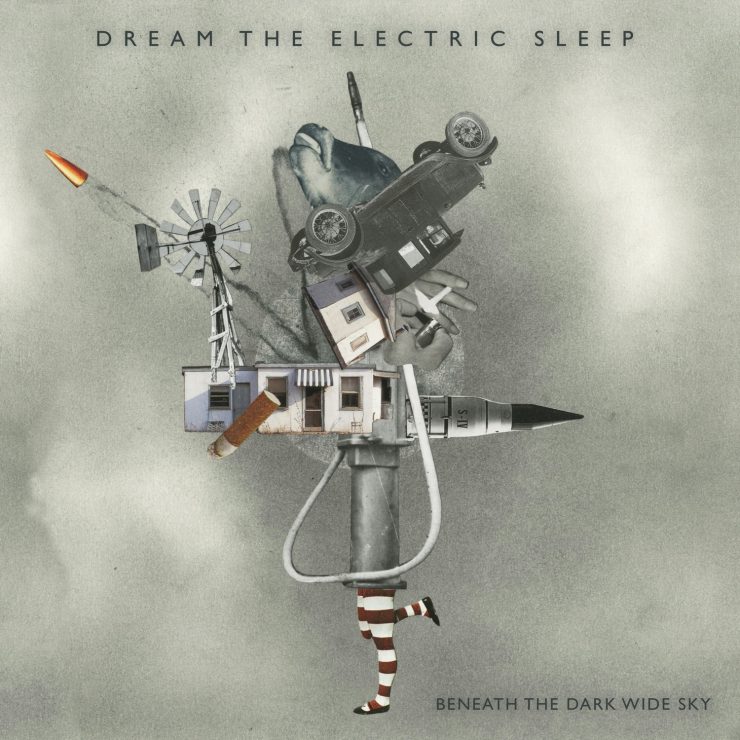 Review of the new Dream the Electric Sleep album.

Dream the Electric Sleep are a self described progressive rock band from Lexington, KY. Formed in 2009 the band is made up of guitarist/vocalist Matt Page, drummer Joey Waters, bassist Chris Tackett and guitarist Andrew Hibpshman. While they have found a home in the prog genre, that might not be an entirely fair description as they are more of an ambient/alternative/rock group that might draw comparisons to bands like Radiohead, Soundgarden, and even Screaming Trees. But with influences like Pink Floyd and Rush making an appearance there is certainly a lot of appeal here on their new album ‘Beneath the Dark Wide Sky’. Coming off the success of their last independent release ‘Heretics’, the group have made a more mature and focused album, full of guitars, lush harmonies, and endless melodies, that is sure to find them a larger fanbase.

From the opening verses of “Drift”, the band lay the groundwork. There are layers upon layers of guitars around drummer Waters’ toms and cymbals tribal beats. The vocals here are all built on multiple harmonies creating a powerful wall of sound effect. While the mid-tempo vibe of the opening track is deliberate and effective, the second track, the single “Let the Light Flood In” is an uptempo noisy rocker that is perfect for radio and extremely memorable. The downtuned guitars in the chorus have a very grungy feel but the vocals add a bit of air to the track and keeps it updated.

The acoustic ballad “Flight” is where vocalist Page really stands out as a great vocalist carrying the soaring melodies in the verses and lifting the chorus to another level. His impressive range serves the song perfectly. The track has a mid-90’s feel to it with chunky guitars and loud crash cymbals throughout. The instrumental “We Who Blackout the Sun” is heavy on rhythm guitars and noises creating an overpowering sonic landscape.  Other notable tracks are the 7 minute track “Culling the Herd” which approaches psychedelic boundaries and the pop-tinged “The Good Night Sky”.

Dream the Electric Sleep have refined their sound with this album and created a solid, concise effort full of memorable tracks.  While this album, might not fill the required amount of notes for any traditional prog fan, this is something splendidly different and offers a getaway from the expected.