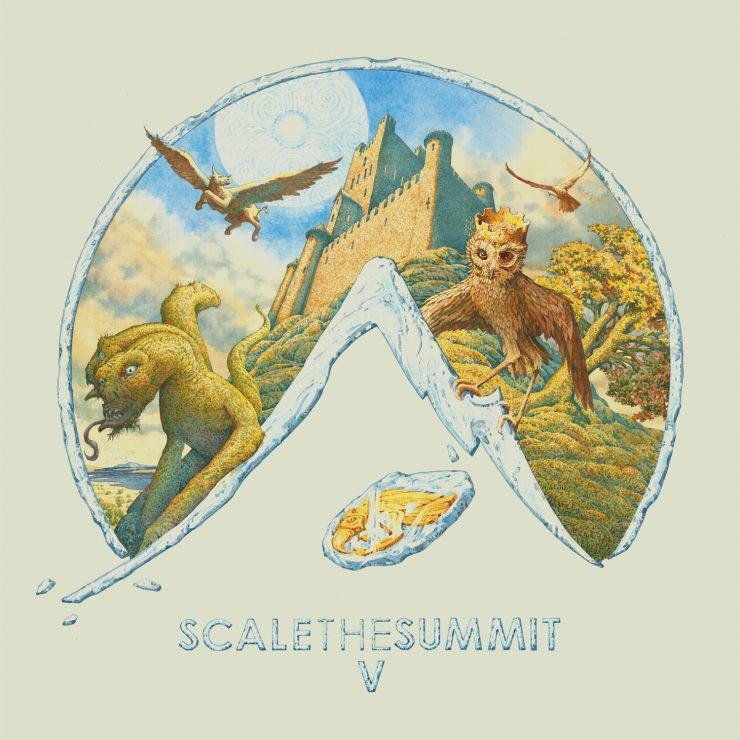 Very few instrumental bands have been able to sustain a long and interesting career.  The challenge to keep things fresh and new, without repeating yourself is difficult.  While there has been an upswing in the popularity of instrumental music and bands in the last few years, this challenge remains.  Scale the Summit, one of the bands that ushered in the era of the Progressive metal instrumental group back in 2004, seems to have conquered this obstacle with their latest album ‘V’.  The album, out on September 18th, 2015 on Prosthetic Records finds the group exploring new territory and producing one of their finest efforts.

With each album the band has been able to build upon their sound and take their music to another level.  ‘The Migration’ was a big step up from ‘The Collective’ and larger commercial success, so the expectation was certainly going to be pretty high for this release.  Initially, this album sounds as if it might be less on the metal side with the opening track “The Winged Bull.”  This song showcases the group’s talent for writing a good melody and somehow fitting it in with all the madness surrounding it.  It is an inviting openign to an album that demands your attention from the first guitar sweep.

The production is pristine as the mix allows the listener to hear all of the 1000 notes going on at any moment.  This might be the most noticeable on the second track “Soria Moria” which opens with one of the album’s most captivating moments.  As odd as it might seem, I found myself humming this song to myself often.  The song starts off almost jazzy but just as quickly turns into a hard rock tour de force.  The following track “Pontus Euxinus” is one of the heavier songs on the album so fans need not worry. plenty of that as well.  New drummer JC Bryant shines here, exploding with double bass one second and then hitting more of a funk groove right after.

The band has released some clever and funny videos for the album, the first of which was “Stolas,” one of the album’s best songs.  Few bands are able to pull of a song of this nature, fusing so much technicality with feel and memorable phrasing.  They do not just shred for the sake of it and it isn’t just about the soloing either.  Bassist Mark Michell and Guitarist Travis Levrier are just as present at every turn.  Michell’s bass sound and ability to cut through with his playing is integral to the sound of this group.

The incredible ballad “Oort Cloud” seems to be mostly built off of finger tapping and includes a bluegrass jam in the middle, well, because why not?  While most fans will look at “Blue Sun” as the track that sounds most like it would fit on the last album, clocking in at 7 minutes and is a song that finds Letchford really throwing in everything but the kitchen sink.

Scale the Summit continue to test the boundaries of what a Prog instrumental band should be able to do.  No mere mortals can pull of this kind of music but Letchford and company seem to do it with ease and make it enjoyable to listen to.  This is, without question, one of the best albums of the year.

Released on September 18, 2015 on Prosthetic Records