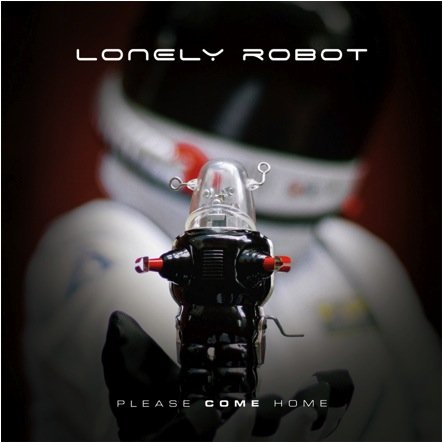 Sometime you can put on an album with completely no expectation and often be disappointed but in the case of Lonely Robot, the complete opposite was true.  Please Come Home, the debut album by Lonely Robot is a pleasant surprise and after continuous listens, it keeps getting better.  Essentially a solo album by It Bites member John Mitchell, the album is a mix and modern rock and older prog with memorable and easily accessible tunes.  Mitchell is joined by great musicians such as Nick Beggs on bass and Cragi Blundell on drums as well as host of guest musicians including Peter Cox (Go West), Nik Kershaw, Steve Hogarth (Marillion), Heather Findlay, Kim Seviour (Touchstone), Jem Godfrey (Frost*) as well as narration provided by British actor Lee Ingleby (Master & Commander, Harry Potter).   Musically, the album at times sounds like a mix of Sound of Contact, Porcupine Tree, and a hint of Pink Floyd.

The concept of space travel and robots is entrenched in the soul of the music.  The opening track “Airlock” has the feel of the opening theme to a sci-fi movie with pounding piano notes throughout to create a suspenseful urgency.  God vs Man, the album’s first single, opens with a driving guitar riff while leading up to an atmospheric verse and back to the heavy riff for the chorus. One of the album’s strongest tracks is the radio ready “Boy on the Radio.”  An uptempo track carried in the verses by tribal toms, the chorus transforms the song into an arena rock anthem.  The middle of the song builds towards an explosive ending with a killer guitar solo.

The album’s best track is “Lonely Robot.’  The longest and most progressive song on the album recalls early U2 in the verses with use of toms and delayed guitars.   The middle of the track slows down but keeps hold of the listener as you wonder what is coming next. All the while the use of simple piano phrasings in this song and at points in the album help build on the space and atmosphere that John Mitchell wants to create.  The heavy Porcupine Tree influenced ending section is welcome and aggressive but just enough that is fits perfectly.

The performances throughout by the guest musicians as in the oddly titled “Oubiette” with female vocal accompaniment, the Police influenced “Construct Obstruct” and “Humans Being” all lift the tracks and help bring the album together as a whole.  While it is not necessarily a concept album lyrically, musically there is a distinct and precise sound and delivery to each song making this a complete collection unified by its overall theme.  It is simply put a very enjoyable album to listen to with great  songs and performances throughout.  This is definitely an album to check out.

Key Tracks: The Boy in the Radio, Lonely Robot