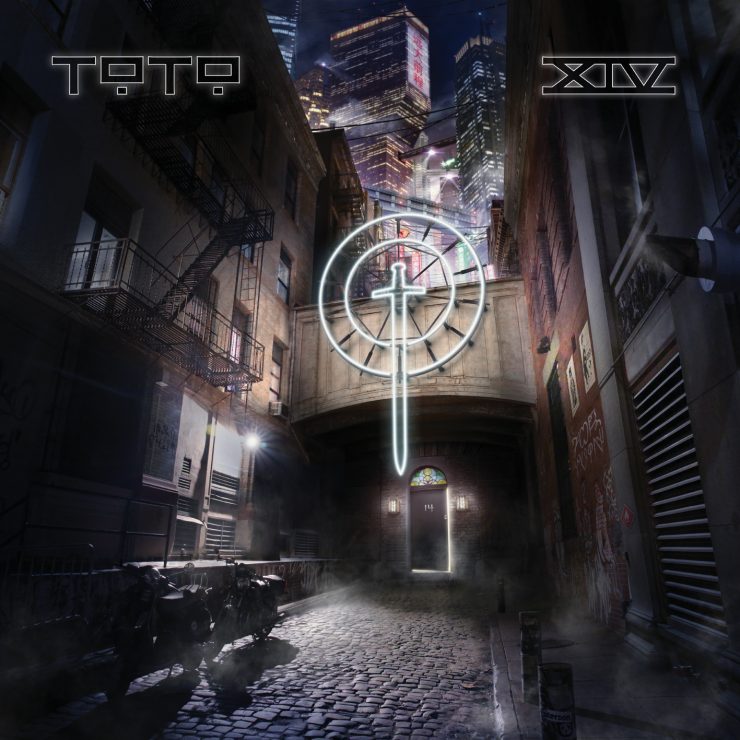 Toto is back!! Yes you read that correctly, Toto is absolutely back with a new album and are sounding better than ever. The truth is unless you are a die-hard fan you might not have known that they have continued to create new music, release albums and tour the world repeatedly long after the pinnacle of their mainstream success in the 80’s.

After recording and touring non-stop for years, Toto took a hiatus in 2008. That proved to be short lived, after the band found out the news about their long time bass player Mike Porcaro’s diagnosis of ALS. So in 2010, Steve Lukather reformed the band with the sole purpose of touring to raise money for Mike’s medical bills. Former members David Paich, Steve Porcaro and Joseph Williams joined him on this tour marking this the first time since 1988 that they all played together on stage. Long time drummer Simon Phillips and Nathan East on bass completed the rhythm section. The tour went so well that another leg followed and then another. The record label notified them that they were under contract for another album, so they all went into the studio last year and recorded this album: Toto XIV.

Toto has always been more of a musical family with members coming and going and coming back again then the typical rock band with a set line-up. This revolving door of members has always been a blessing and curse for the band but the music never suffered and somehow always managed to evolve and grow with each incarnation, this lineup is no exception.  Just like the tour, this is the first time since the late 1980’s that all of these guys were in the studio together and what they have created is classic Toto but with a newer modern twist. The music has its roots in their unmistakable sound but yet it still feels fresh, updated, and as good as anything else on the radio. On this album they have enlisted the help of former Steely Dan drummer Keith Carlock behind the drums and Lenny Castro on percussion. They also have a few guest bass players such as Tal Wilkenfeld, Lelan Sklar, Tim Lefebvre and original bassist David Huntgate. Steve Lukather also plays bass on three of the tracks.

Toto XIV opens with “Running Out Of Time”, an upbeat and powerful song. The song starts off with an amazing Lukather signature guitar riff that lets you know this song (and album) are going to rock. The song kicks in with a driving groove that gets you tapping your foot along to each beat. Once the verse comes in we get our first taste of Joseph Williams’ vocals. One word: Wow. His voice hasn’t changed at all in the 15 years since he last sang on the Toto album “The Seventh One”. It may actually be stronger, if that’s even possible. His vocals soar throughout the verse and then leads us right into an extremely catchy chorus that is guaranteed to get stuck in your head. A great song to open the album with.

There are some other notable songs on the album. “Burn” starts off with a classic David Paich piano riff, which then slowly builds as more layers are added all leading to a bombastic chorus that is a wall of sound and emotion that you feel in your chest. “Holy War” is a feel good straight ahead rocker with some cool syncopated progressive parts and some classic Toto solos. The deep political/religious messages, the sharing of vocal duties by Williams and Lukather, and the catchy chorus really make this song stand out as something special.

“21st Century Blues” is a groovy six minute musical exploration that has a Steely Dan feel to it. The song blends elements of both Blues and Jazz thanks to original bassist David Huntgate’s impressive bass work and Carlock’s drum grooves. He really shows why he was a perfect replacement for Simon Phillips behind the drums with this song. “Unknown Soldier” is another standout on the album with some great vocals, mood swings, deep messages, intricate music and tons of emotion. The song takes you on a journey that you wish didn’t end.

“The Little Things” is a sweet heartfelt pop song that has a great message about what is important in life. Steve Porcaro, in a rare performance, takes on the lead vocal duties and absolutely knocks it out of the park. “Chinatown” is a throwback to the early Toto jazzy bluesy epics with so many changes and layered parts. Paich, Williams and Lukather all share lead vocal duties on this song which is only something Toto can do. Take all of that and add some impressive instrumentation, changes, solos and a great groove from the Carlock/Huntgate rhythm section and you feel like you are back in 1979 again.

The album concludes with the progressive (almost seven minute) epic “Great Expectations”. Again we find the trio of Paich, Williams and Lukather sharing the lead vocals and each sounds perfectly fit within the song. The song is so complex and has so many variations and themes that it is hard to fully describe it properly beyond saying it is Symphonic. The arrangement, orchestration and execution of each part is so impressive that you feel like you have been taken on a fantastic ride. Lukather’s bass playing on this song is something to take special note of. He is quoted saying that he was “Channeling his inner Chris Squire”, and he really did!! With each listen you are going to hear something you missed the time before. It is truly a song you will listen to over and over.

Toto XIV from start to finish is a fantastic album. These guys know how to write quality songs that grab you and don’t let go. Each song has so many layers to it that you will need to listen to it a few times to catch everything. You owe it to yourself to carve out 56 minutes out of your busy life, download this album, throw on some headphones and lose yourself in this great album. Enjoy!!

Check out our The Prog Report interview with David Paich.