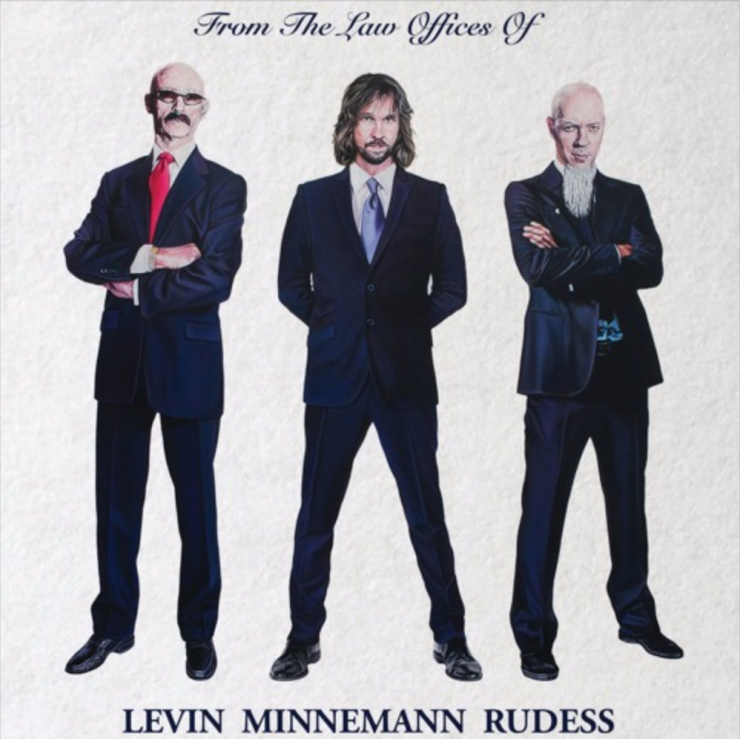 Review of ‘From the law offices of Levin Minnemann Rudess’

In this day of music overload it sometimes seems like artists today, especially in Prog, are releasing more music than one fan can consume. In the case of musicians like Tony Levin, Jordan Rudess, and Marco Minnemann, it is easy to see why. They need to play. They can’t help it. If they are not playing or recording somewhere, it is probably because a limb is broken. The ideas flow out of these guys at such an overwhelming rate, they can just press record and let it rip.  Outlets like this unique trio completely work because of that fact.  There is no holding back, no restrictions, just letting loose and seeing where things go. Add to that the sheer brilliance of what they are capable of actually playing and you have the awesomeness that is ‘From the Law Offices of Levin Minnemann Rudess.’

When Jordan Rudess introduced himself to the Dream Theater crowd, it was through the Liquid Tension Experiment.  It was apparent he needed to be in Dream Theater almost immediately.  While he has flourished in that group becoming the premiere keyboardist in Rock and Prog, not since LTE, has he been able to play with such reckless abandon.  Minnemann, on the other hand, is the real life version of Animal from the Muppets – playing as crazy as possible but in the most beautiful and jaw-dropping way.  Of course, the glue holding it all together, is Tony Levin, also part of LTE and filling the space as only he knows how to do.

The album opens with the 5/4 romp “Back to the Machine”, a Joe Satriani-esque melodic tune that captures the listener from the first drum fill.  The chorus melody is memorable and written perfectly.   The second track ” Ready Set Sue” has a crazy jazz groove filled with ambient noises around Marco’s manic drumming.  There are a lot of moments of LTE thrown in here if you think of some of the parts being played by Petrucci.  “What is the Meaning” features the more familiar Rudess keyboard sound used on his solo work and with Dream Theater.  Some jazzier moments are thrown in like the whistle-led “Witness”, or the wild “Riff Splat” which is a real roller coaster of a track.  The album has a few softer moments with “Balloon” and “Shiloh’s Cat.”

Instrumental albums are always a tough challenge to create and, for that matter, to review.  They are not intended to have hits or appeal to mass audiences.  But when done correctly, with the right combination, they can be absolutely astonishing. Levin Minnemann Rudess have produced one of the more fun and entertaining instrumental albums in a while.  Fans of these musicians and their various bands must get this album and give it a listen.  It is definitely worth it.