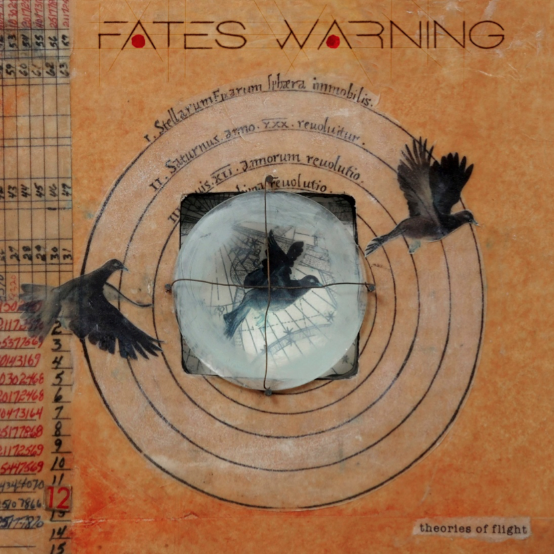 Review of the new Fates Warning album ‘Theories of Flight’ out on July 1st, 2016

The new album will be released July 1st on InsideOut Music.

There are few Prog Metal fans that do not have Fates Warning at or near the top as one of their favorites.  The influence is immeasurable and the collection of classic albums by this band can hardly be challenged.  Now, the Metal Prog pioneers  release their 12th studio album, “Theories of Flight” before this 4th of July weekend.  Accomplished by the core line up which delivered 2013’s acclaimed “Darkness in a Different light”, the album brings Fates Warning once again to the front of the line of authentic Progressive Metal.  The album is produced by Jim Matheos and mixed/mastered by Jens Bogren at Fascination Street Studios (Opeth, Symphony X, Haken, etc) and might be one of their best albums in years.

To kick off the album, the opening track “From the Rooftops” begins with a Disconnected-like interaction of clean guitar chords, groovy toms, and a smooth solo guitar which leads to the very familiar vocals from Ray Alder. Then Fates Warning enters into a very heavy, proggy, and aggressive tone which will please those metal prog ears to the fullest. This song sets the tone for the remainder of the album. The tone which is guitar centered, with very skillful and tight drums, rich and warm bass from Joey Vera, and passionate vocals. Alder’s work is demonstrated well in the next two tracks, “Seven Stars” and “SOS.” Along with the familiar yet fresh guitar work, Alder’s vocals are right at home in a non-stratospheric level as he brings power and even a little dirt as he delivers great lead lines and anthem like choruses.

There are a total of 8 tracks. Included are two 10+ minute epics,”The Light and Shade of Things” and “The Ghosts of Home,” which show the skill and balance of the bands ability to satisfy the shorter catchier song with signature Matheos power guitar hooks as well as the journey of an epic prog composition. Both long tracks of the album solidify Fates Warning’s claim of metal prog mastery not only in the skillful instrumentation, but also in the melodic and stylistic domination which long time fans have become accustomed to.

“White Flag” brings another example of the technical prowess and feel of Bobby Jarzombek’s drumming. His aggressive style allows the band to not only maintain a familiar vibe from the past, but it also brings a fresh and modern edge which will attract long time and new fans alike. “Like Stars Our Eyes Have Seen” is yet another brick in the wall of metal prog these guys have built over their long career and this latest effort. Fates Warning closes the album with the title track by delivering an instrumental piece showcasing the band’s ability to stylistically change and yet maintain their identity as one of the top metal prog acts.

Fates Warning, along with two of the other long standing top metal prog acts, Dream Theater and Queensryche, have delivered solid studio recordings over the last 9 months which cemented these prog metal giants as still major players and influence on the prog metal kingdom. With ‘Theories of Flight’, Fates Warning continue to maintain their position comfortably in the Prog Metal hierarchy.

Key Tracks: From the Rooftops, White Flag, The Ghosts of Home