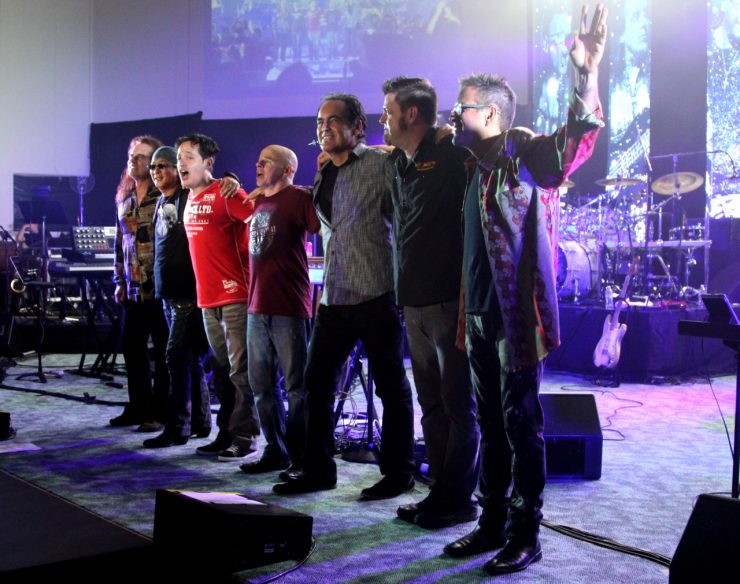 Review of Morsefest 2016 and the performance of the Spock’s Beard album Snow.

Spock’s Beard perform their classic album for the first time ever.

Snow in July in Nashville!  Well, at least in a musical sense.  What was once an impossible dream happened over 4th of July weekend at the now annual Morsefest event in Nashville, TN.  The event put on by Neal Morse and his label, Radiant Records, now in its 3rd year, took things up a notch with a Spock’s Beard reunion to perform the classic, never played before, album Snow.  Of course, it is well documented how Neal left the band shortly after the album’s release in 2002. But the history behind how this reunion even happened is a story itself.  In 2014, Morsefest was born with the idea to invite Neal Morse fans from all over the world to see Neal and his band perform two of his solo albums.  That year, it started with the first two albums, ‘Testimony’ and ‘One’.  Alan Morse even showed up to help perform an encore of “The Light”.  The weekend was such a success, they decided to do it again, this time with two different albums, ‘?’ and ‘Sola Scriptura’.  On the second night of that weekend, Nick D’Virgilio surprised everyone by getting behind the drums to join in on “At the End of the Day.” It was a historic night and set the stage even higher for the next Morsefest. 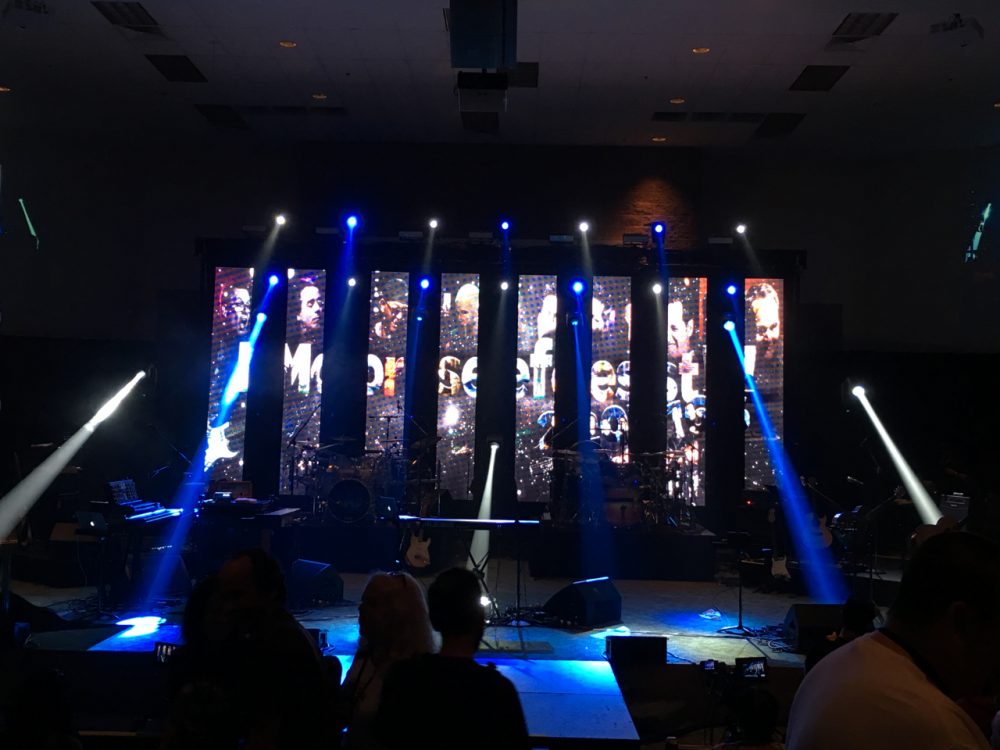 What would Neal and the crew do to top themselves?  They could play two more albums, but it had to be something even bigger.  If Alan and Nick could come, maybe they could get the other members of Spock’s too?  Fast forward a few months later and the Spock’s Beard collection, ‘The First Twenty Year’ came out.  For the release, Neal wrote a brand new 20 minute epic called “Falling For Forever” and all 7 members of Spock’s Beard past and present played on it.  Then rumors started swirling, maybe they could play Snow at Morsefest?  Rumors turned into reality and, shortly after, the reunion everyone had wished for was announced.  There was still the issue of what would be performed on the second night of the weekend.  There had always been two nights and Snow was only going to be on one of those nights.  Radiant Records head, Chris Thompson, came up with the idea to have an unplugged storytellers night, Prog style.  That brings us to July 1st, night 1 of Morsefest 2016. 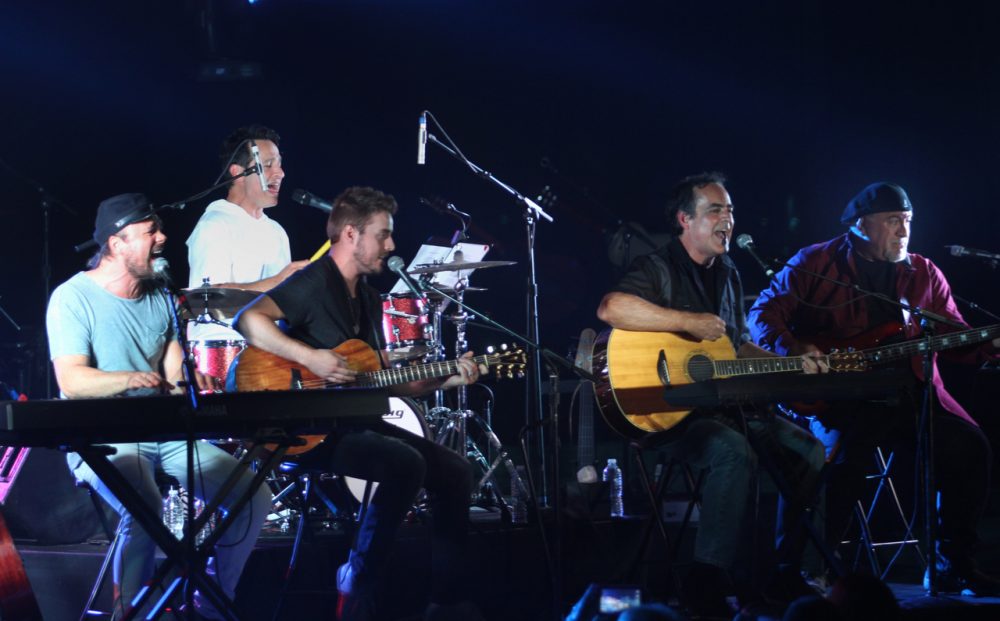 The show was in the main hall where Snow would occur, but the set up was smaller.  An intimate setting of a couple of keyboards, drum kit and some acoustic guitars were placed in the front of the stage.  The lighting and backdrop was brilliant with the faces of the 4 storytellers for the evening featured – Casey McPherson, Eric Gillette, Nick D’Virgilio, and Neal Morse.  Randy George was invited as well to provide some bass to the occasion.  Throughout that first night, the guys went through a series of pop covers (U2’s “Pride”, The Police’s “Roxanne” and even The Temptations “Papa was a Rolling Stone”) and songs from their various groups. 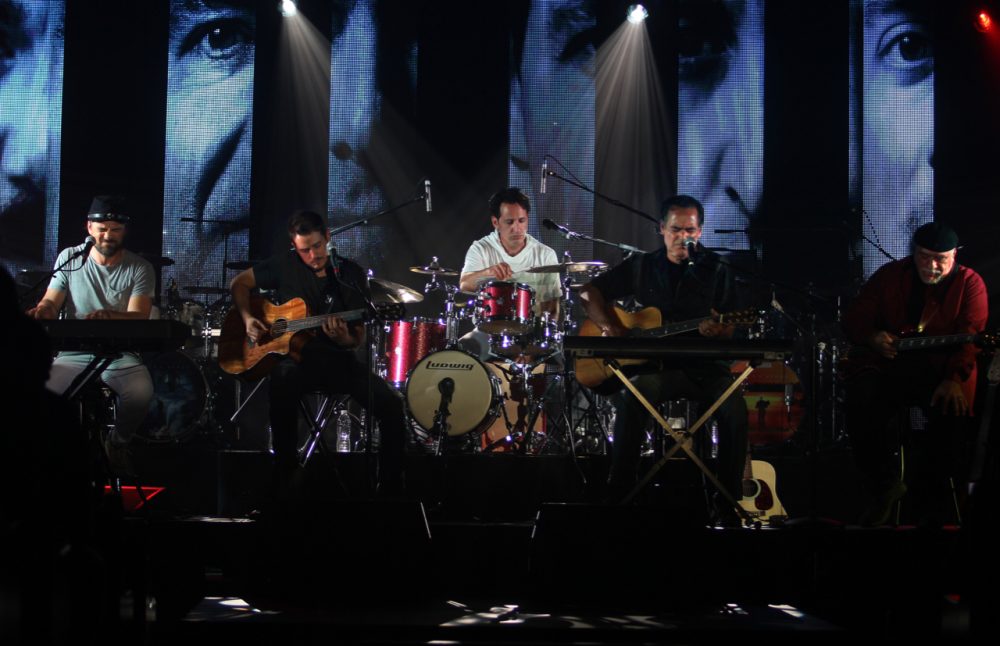 Casey led a number of Flying Colors songs such as “Kayla” and “The Storm” and told the story of how Mike Portnoy kept insisting that the band be called Monkey Wrench.  It was producer Peter Collins who pulled the phrase Flying Colors from “The Storm” and suggested that as the band name.  Neal offered some solo material including an emotional “Jayda” and a few Spock’s Beard classics, even updating the lyrics to “Strange World” to include Brexit and Trump.  Nick also told a story about Kevin Gilbert before singing “Childhood’s End” while Eric Gillette sang a song off his first solo album called “Above the Sky.”  It was a night filled with joyful and heartfelt music. 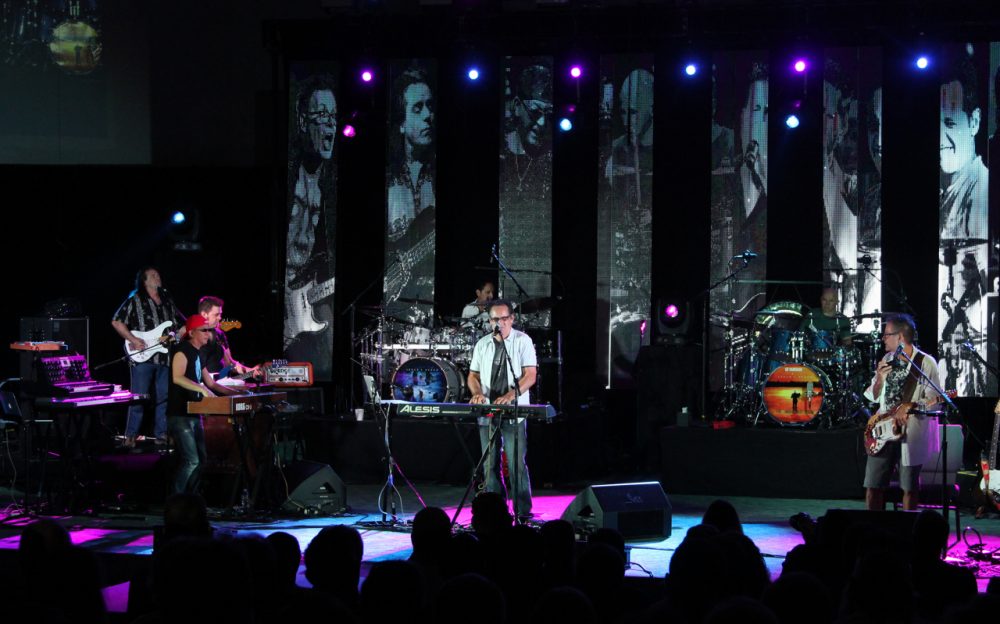 The next morning kicked off with a performance for the Neal Morse ‘Inner Circle’ fan club where Spock’s Beard, with all 7 members, jammed over a number of covers from the bluesy “Crossroads” to Journey’s “Separate Ways” with Ted Leonard hitting all those high Steve Perry notes.  For many of the songs, the guys just picked a key and figured it out as they went along.  It was loose and fun with no concerns for any mistakes.  Meet and greet sessions followed throughout the afternoon, each session lasting more than 2 hours with Q&A sessions, signings and pictures.  But the big event was yet to come. 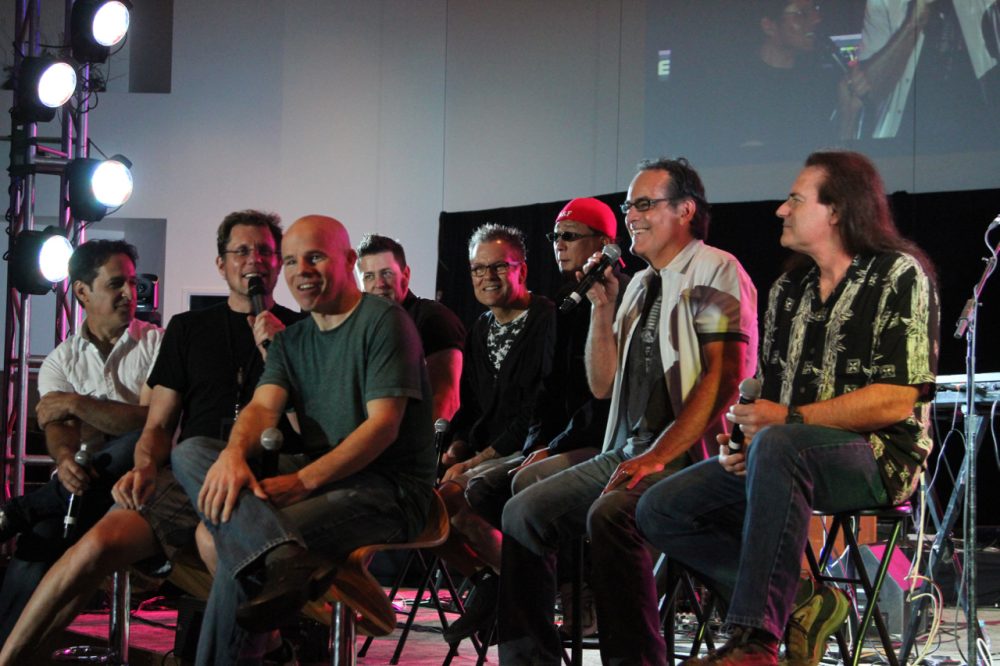 Lines were formed around both sides of the New Life Fellowship church, where the festivities occurred.  The light went down promptly at 7:30 and Snow began.  It is difficult to do justice in explaining the level with which this show was produced.  There were more than a dozen high-def cameras placed throughout, screens on both sides and a massive main video screen as a backdrop. Photographers crawling across the floor like ninjas could be seen taking pictures from all corners.  The lighting and sound at this show could rival any major arena show.  The impressive sound mix was due to honorary band member, Rich Mouser, who received applause for his efforts by the crowd, as well as Christian Rios, who designed the videos for the backdrops which elevated the show. 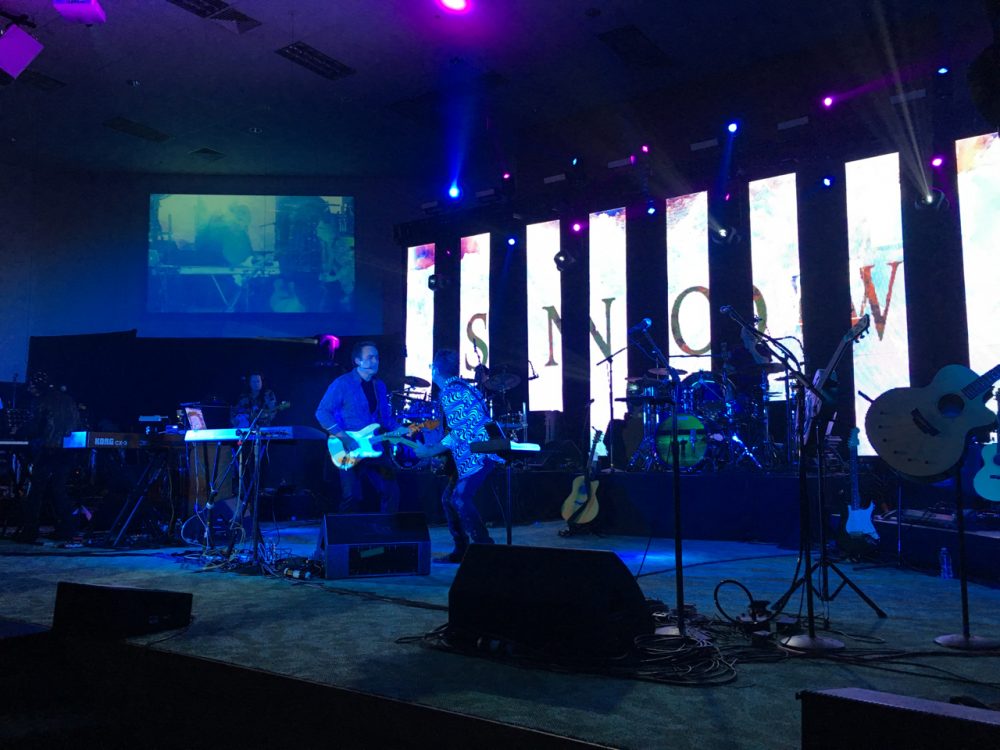 There was some uncertainty throughout the crowd as to how Snow would be performed.  Ted Leonard and Jimmy Keegan were not in the band then, but are the singer and drummer in the current version of the group.  It was fantastic to see two drum sets on the stage allowing for both Nick and Jimmy to play, as well as a spot for Ted to play guitar and sing.  No one was going to be left out.  I’ll spare you the song for song descriptions, the DVD will do more in that regard than you would find here.  However, there were some moments worth highlighting, like Nick taking the stage in full hip-hop regalia for “Welcome to NYC” or his astonishing vocals in “Carrie”.  Ted was a bolt of lighting on “Devil’s Got My Throat” giving a new level of energy to the song that was missing from the original recording.  Jimmy used his acting chops to bring extra personality to “Freak Boy” as he slithered across the stage and Alan shined on the “Solitary Soul”.  Ryo rocked the Keytar during his solo while Dave Meros provided the heavy groove on “I’m the Guy.”  Of course, the steady presence through it all was Neal, who broke down at the end of “I Will Go” before leading everyone into the epic closing of “Wind at my Back”. 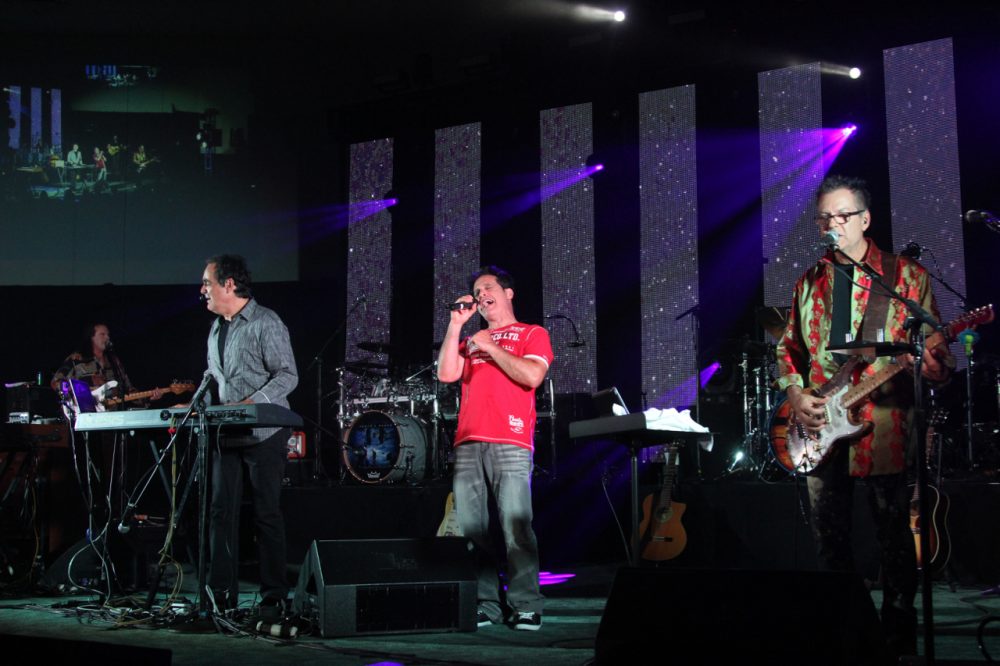 By the time the album performance was done, everyone was on their feet and exhausted from the emotional overload.    The band came back from a group performance of “June” before kicking off the new epic “Falling For Forever”, another song being played for the first time.  The beauty of this song is how all 3 vocalists take separate parts at lead.  Neal and Ted trade off on verse and chorus while Nick tears apart the middle section.  The highlight here was the drum dual between Nick and Jimmy which saw them leaving their kits and taking it all the way to the floor on the front of the stage.  At the grand final of the song Ted, Nick, and Neal sang the final chorus with Ted taking the lead.  The lyrics in the song say “Some had said the dream had died, but it’s still here.”  Very appropriate lyrics to describe a group that despite all the odds, have kept going. The band, their music , and their fans are still here and aren’t going anywhere. 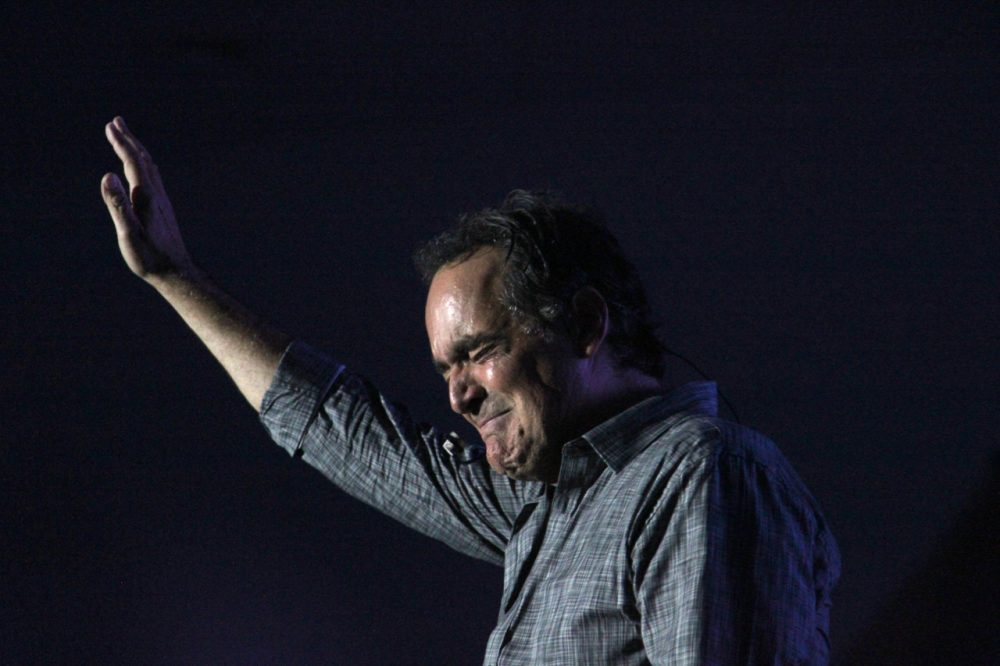 Chris Thompson, along with his wife Heather, and a team of dozens do an unbelievable job putting this even together each year and should be applauded for their efforts.  This was an event for the ages. For any Spock’s Beard and Neal Morse fan it was a wish come true but it also showed the power of this Prog community which continues to bring people from all corners of the world together to celebrate great music and make friends.   If you were there, it will be a memory for a lifetime, if you weren’t, don’t miss the next one! 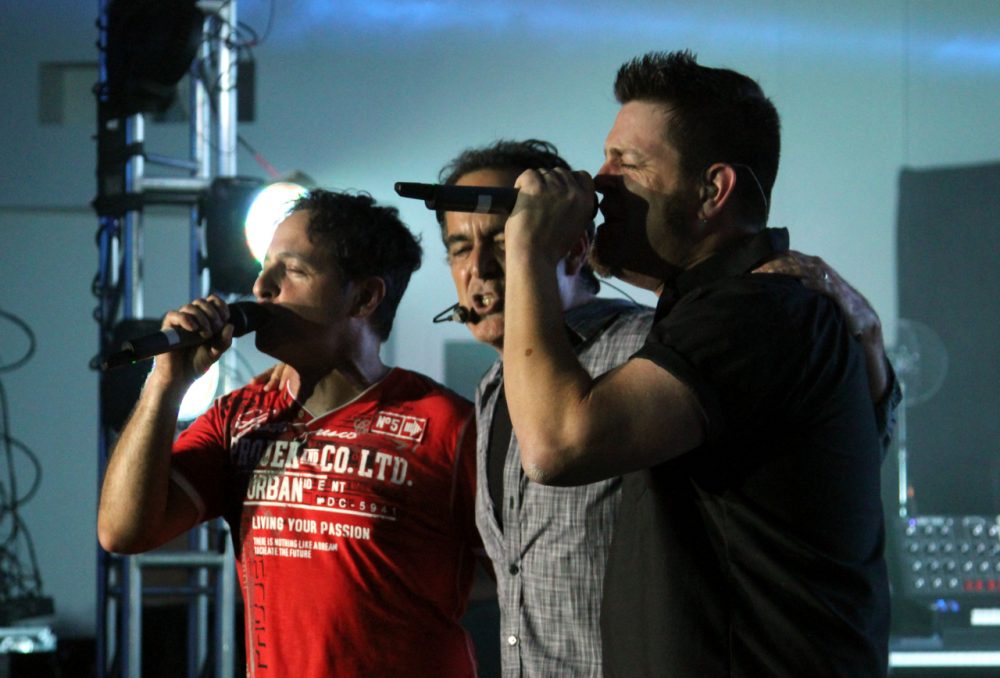 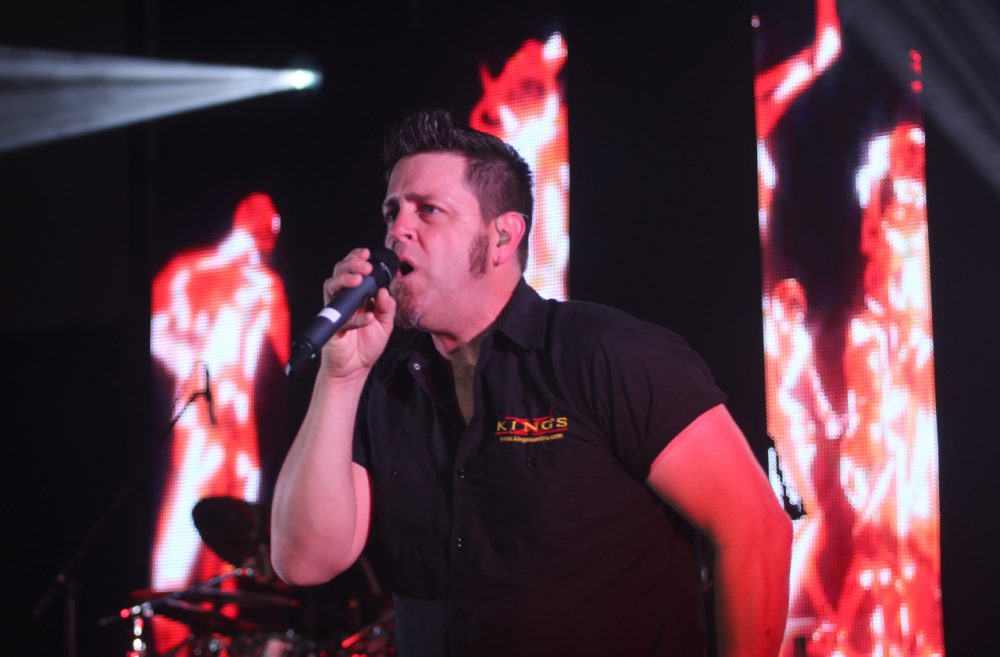 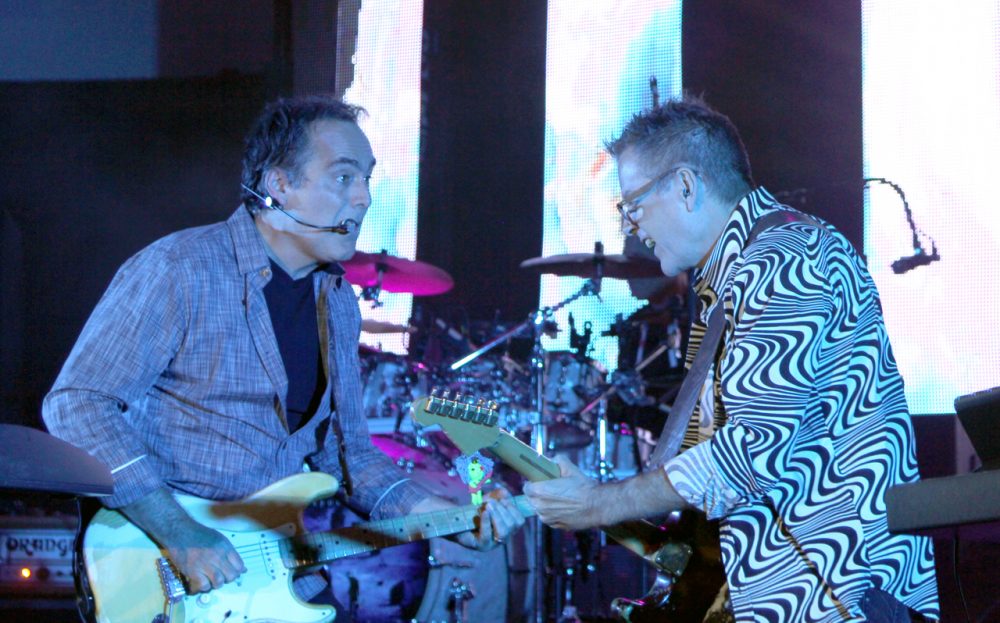 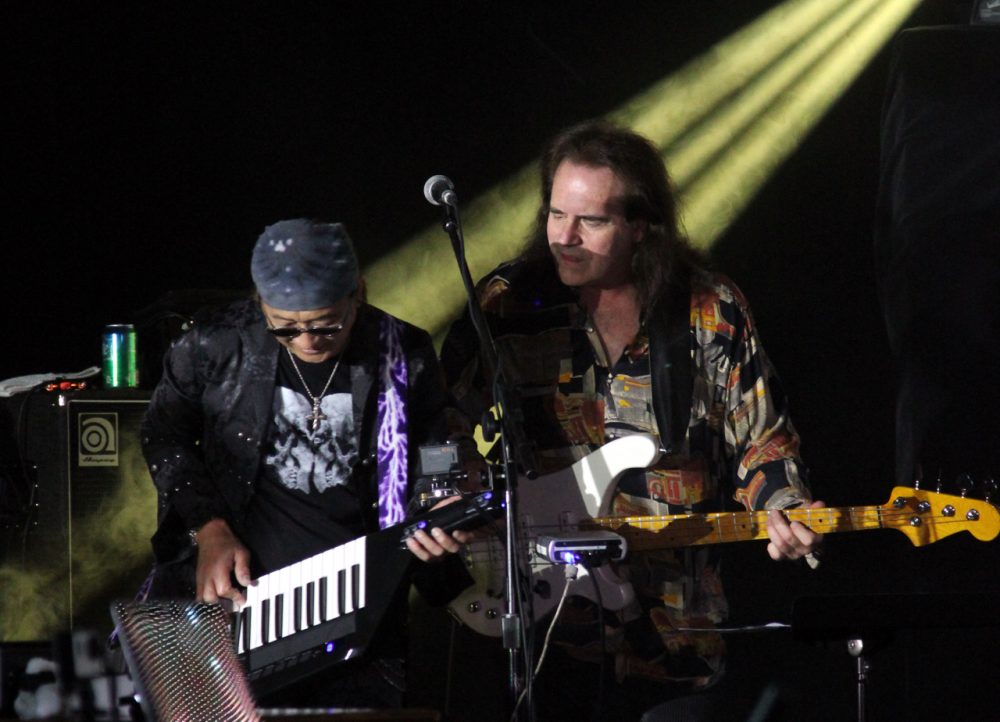 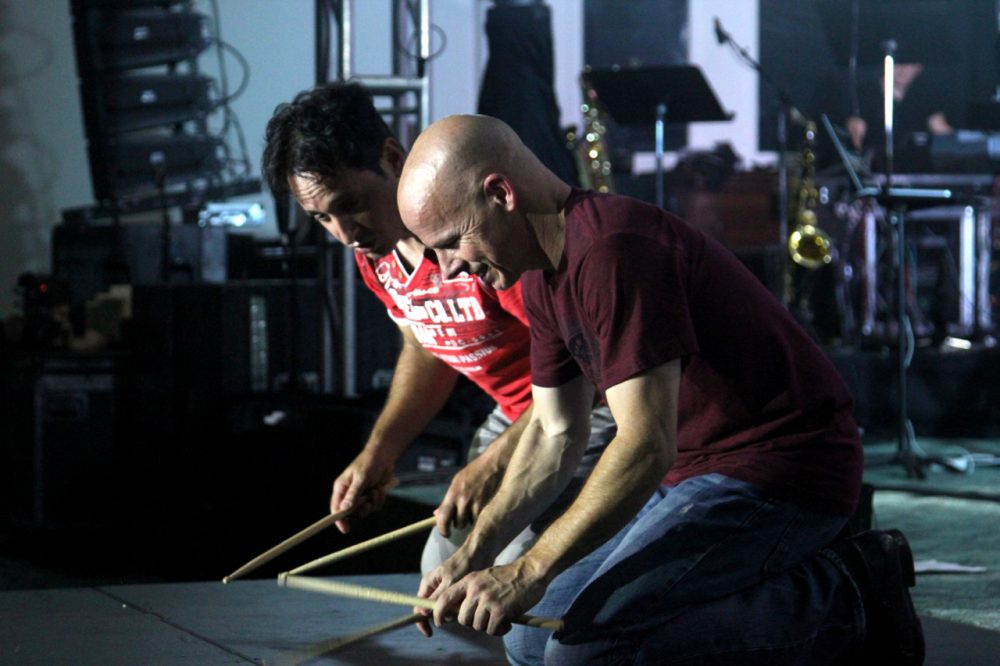 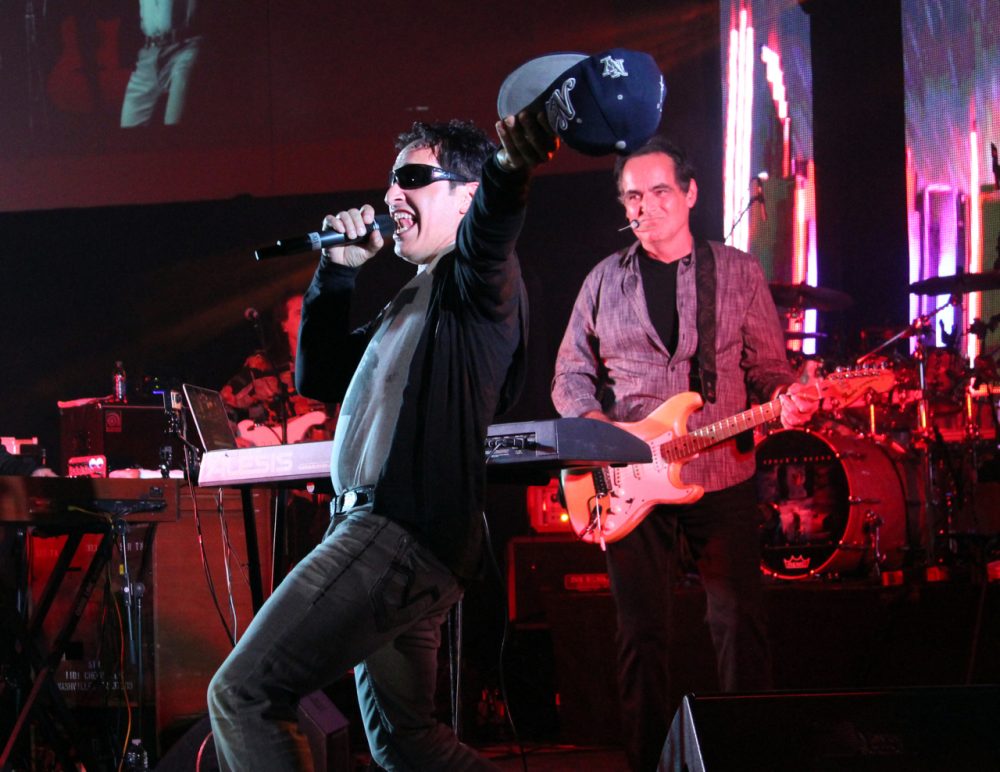 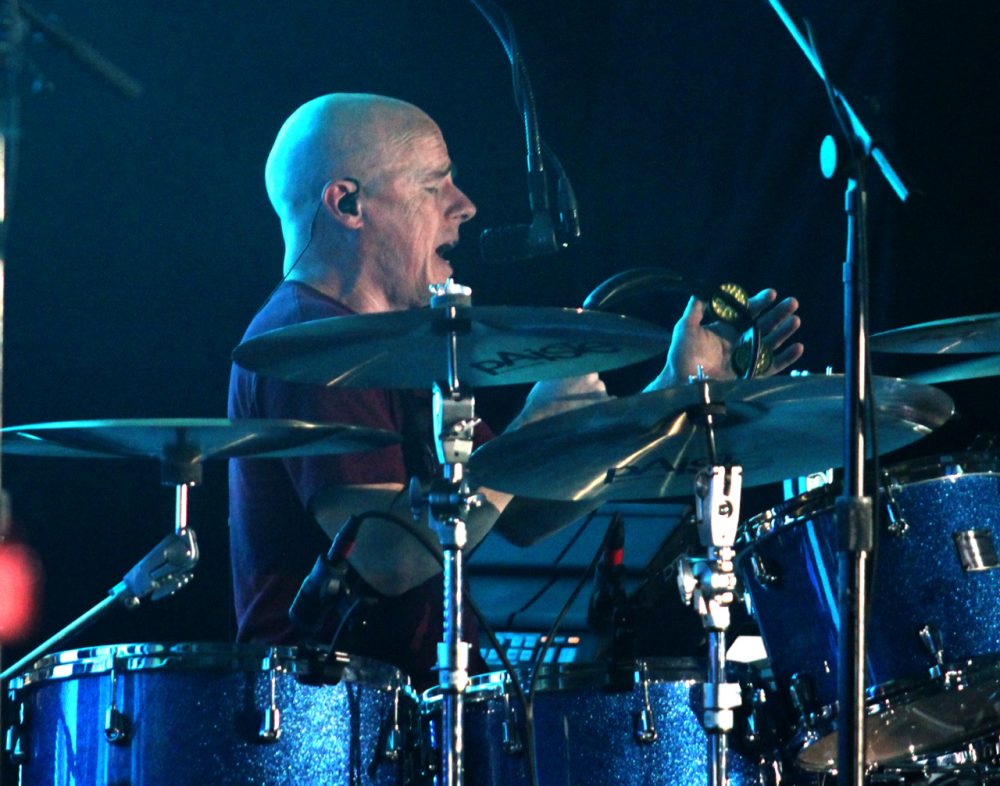 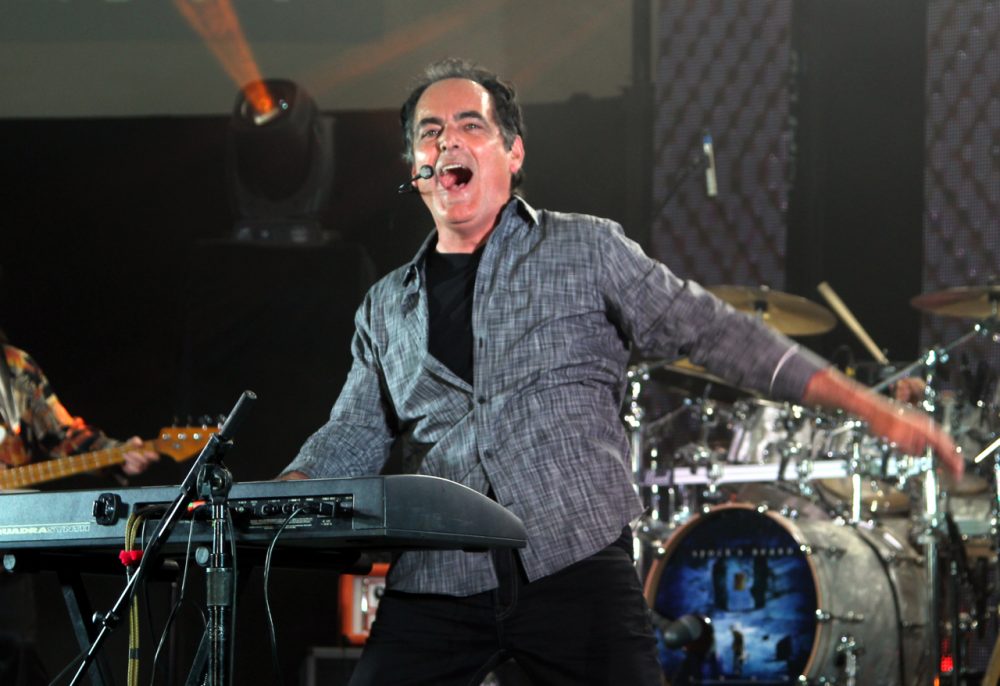 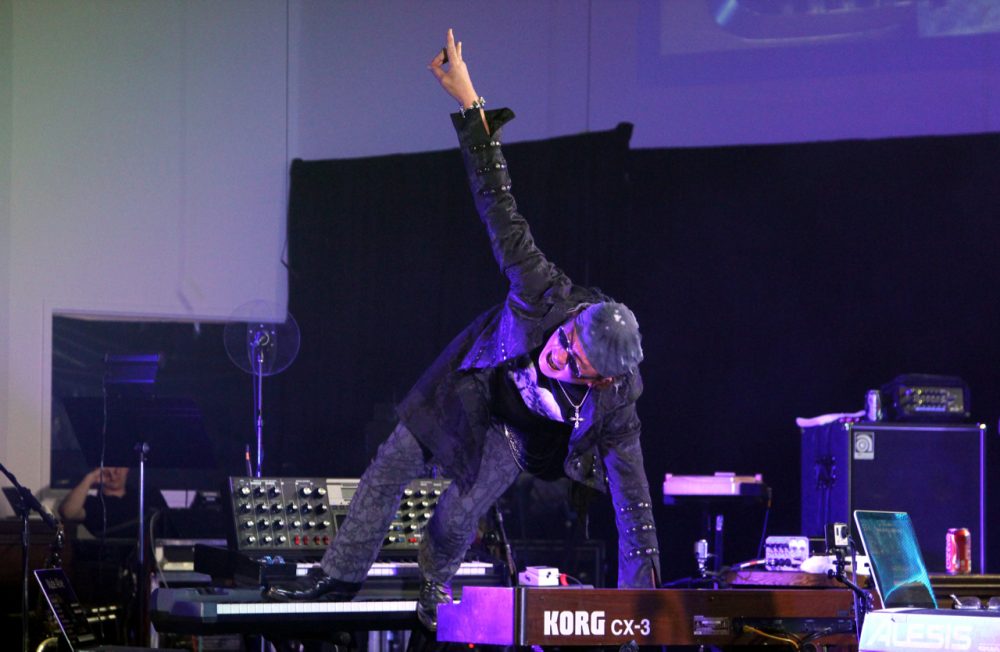 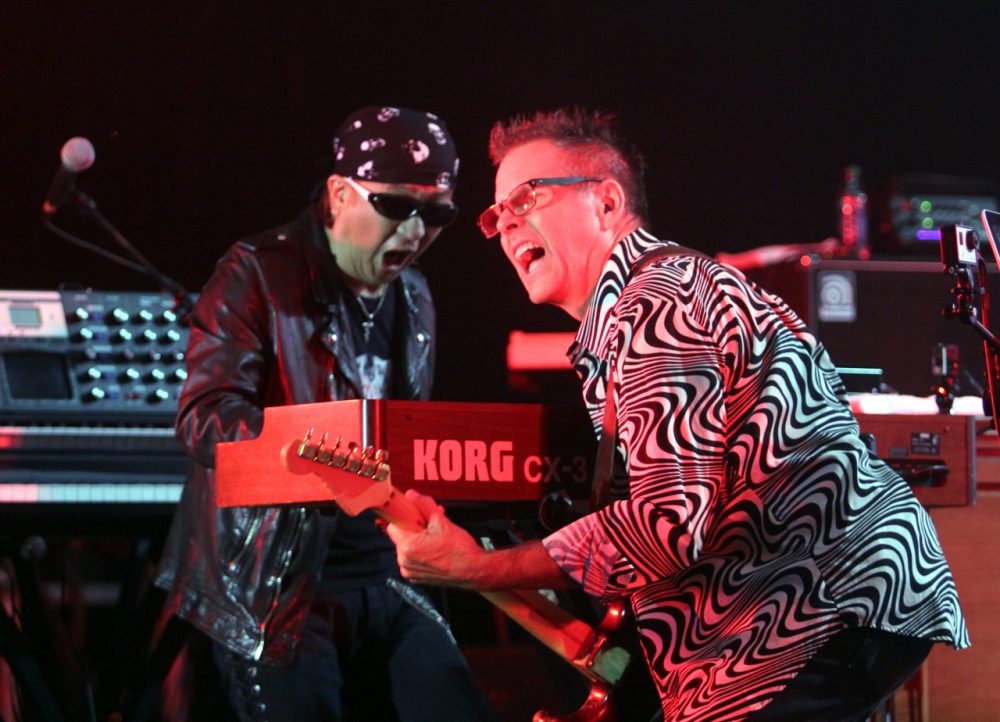 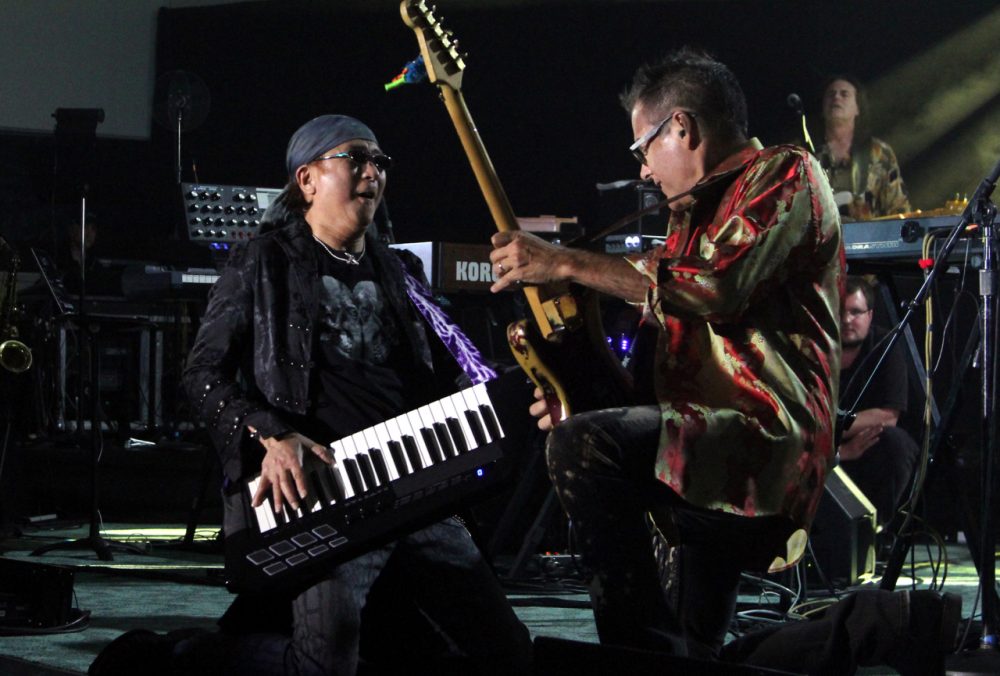 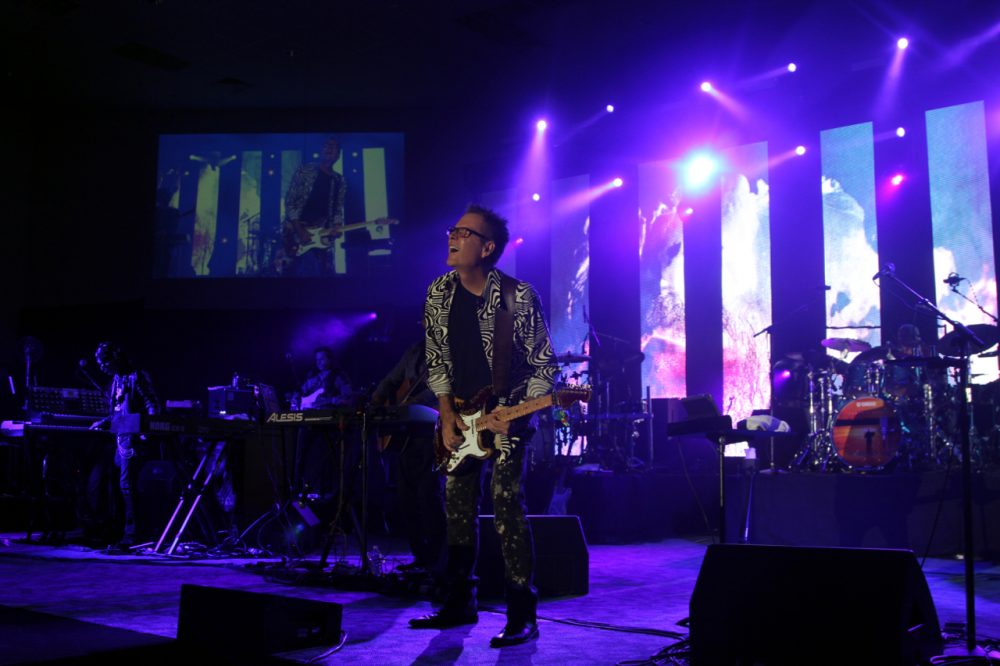