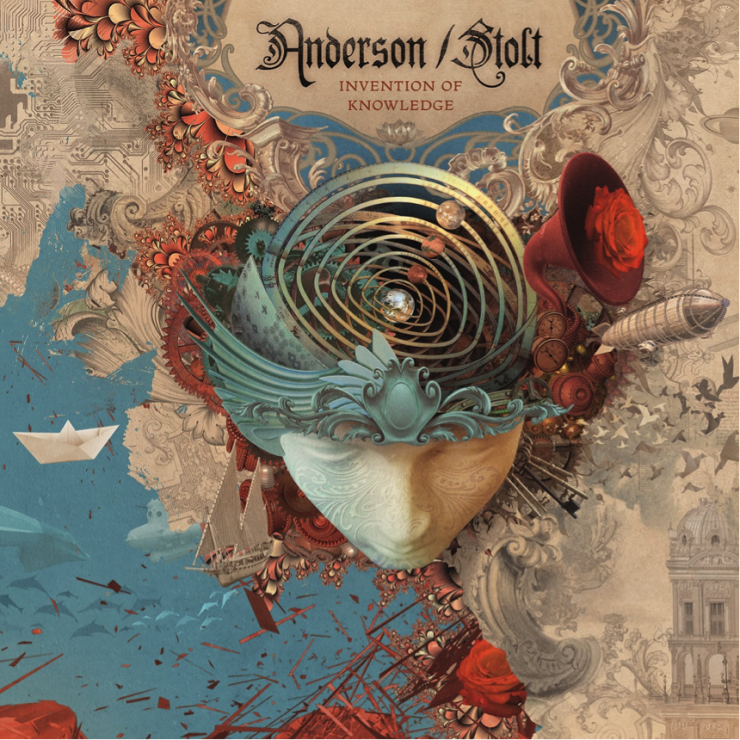 Review of ‘Invention of Knowledge’, the new album by Anderson/Stolt featuring Jon Anderson and Roine Stolt.

Roine Stolt (The Flower Kings, Transatlantic) is a usually pretty Stoic-looking fellow. But when he appeared on the main stage of Progressive Nation At Sea, as part of the Transatlantic-cored backing band for Jon Anderson, the man was beaming from ear to ear for the entire set. And with good reason – it was a magnificent performance, during which Stolt got to play guitar for one of the original creators of the genre we love, and a hero of his teenage years. Friendships and mutual admiration societies aplenty were formed that night, and this particular collaboration was suggested.

Co-produced by Stolt and Anderson, the album features performances by a veritable who’s who of Progressive masters, inter alia Jonas Reingold (The Flower Kings, Karmakanic and The Fringe), undoubtedly one of the greatest bassists in the world, Felix Lerhrmann (also of The Flower Kings), one of the most underestimated drummers in Prog, keys men Lalle Larson (Karmakanic) and Tom Brislin (Renaissance), multi-instrumentalist Daniel Gildenlow (Pain of Salvation), and a host of other big names.

Forgive me, Gentle Reader, if this review meanders a little, but you should bear in mind that the music it seeks to critique does exactly that. It meanders like a crystal stream running through a leafy valley, up dales and down glens, gently exploring parts unknown, and finding its level with peace and tranquility.

You might expect this album to sound like a mix of Tales From Topographic Oceans (one of Stolt’s cited influences) and a Flower Kings record, and indeed it does. It is even comprised of four long-form compositions (sound familiar?), only this time with a good dose of Swedish melodic third-wave Prog. The accepted view is that there have been three waves of Prog: the first in the 70’s, spearheaded by Yes and Genesis, the second in the 80’s, led by Marillion, and the third, still going strong, initiated by Spock’s Beard, Dream Theater and the Flower Kings. This production brings together the leader of the First with one of the leaders of the Third, and it proves that great Prog is great Prog, no matter which era generated the makers.

The album begins with the three-part title suite. At the start, we are sounded out by a serene and pastoral volume guitar accompanied by dainty wind-chimes. It sounds soothingly familiar, and within seconds, that beloved, angelic voice is heard, and we are under way. First passage “Invention” is almost ten minutes in length, and it makes a clear statement: while there is to be innovation, those of you who long for that “lost” Yes sound of the early 70’s will not be disappointed. Before long, The Flower King bestows on us one of his signature guitar solos, reminding us that in addition to his now legendary sense of melody, Stolt’s playing is instantly identifiable. He falls into that rare classification of guitarists that have a sound so unique that it might as well be trademarked.

Second passage “We Are Truth” is a magnificent protest against untruth and dishonesty. Only Jon Anderson could deliver this lyric without it sounding preachy: “Just living with peace in your heart, it will always be so real. We will not surrender to the victim inside.” It is true hippy Prog rebellion. The piece ebbs and flows, building in power, entreating us to “Give it up to see” and ends with a huge declaration that “We will not surrender to it all… We are truth made in Heaven, we are glorious”. Yes they are.

The third and final piece in the opening suite, “Knowledge”, starts with a huge symphonic chime and bathes the listener in intense swathes of sound and lyric – it’s like musical moonlight, and the moon is waxing and waning.

Second suite “Knowing” has two parts, the first performed mostly in 10/8, showing the true Prog credentials of these legends. Fabulous instrumentation provides a perfect backdrop for Anderson’s messages of stars, ley-lines, light and love. His lyrics are what you have come to expect, weaving mindscapes of imagery, but one finds that at the same time as the familiar soundscapes, there is a more purposed message in these compositions (at any rate more so than his Yes lyrics.) Stolt seems to inspire the political (or at least the analytical) in Anderson, while never leading him away from his soundscapes. For example, could there be a more Jon Anderson lyric than “All in the countenance, Life”? But it is followed by “Do the leaders step towards a better resolve?” The song makes the best of that legendary voice, using vocal counterpoints and big harmonies. It ends perfectly, with a dainty and beautiful piano melody.

Then one of the most wonderful moments on the album arrives: “Knowing II – Chase and Harmony” begins with a simple but gut-wrenchingly beautiful piano riff that presents the perfect platform for Anderson to extend his pastoral and spiritual themes. It is a high-point on an already ascendant album. The song is about truth, and this is deeply fitting, since the musical backdrop is authentic and indeed truthful.

Third suite “Everybody Heals” has three passages: “Everybody Heals”, interlude “Better By Far” and short piece “Golden Light”. The suite is based on an engaging strings progression, with Stolt’s distinctive guitar and Reingold’s huge bass prominent throughout. It culminates in a magnificent jazzy guitar passage (think Zappa at his best) that resolves back into the strings and piano platform before building to a thematic climax: “Even the strongest ones can change the given life”. The lyric encourages us to choose to do our best in life and never fail to dream, since we can all change the world and reach the Golden Light. Extremely uplifting, this suite could have been on “Tales”, but it has a stronger message. No tribal chanting here – the jazziest melodies regularly turn out to be the best moments on this album, and one of them ends this suite.

Longest song, and closer, “Know” is a fitting culmination for the album. It starts with a dreamy, beautiful samba-like intro with hazy organ that in a weird way could have been on a Sergio Mendez album if he had ever decided to go Prog. Hazy, splashy, dreamy and washed in reverb, the song sounds like a gentle aquamarine wave washing up on a powder beach. The lyric speaks of knowing you are in the light. “No judgment at all – just let it go. Remember you will always rediscover, to never forget the river of your dreams as you will be delivered”. The guitar solo is suitably light and airy, and this time the paucity of the drum mix does indeed suit the song well. A stunningly beautiful piano outro ends the song and the album on a perfect note of resolution.

The immense rhythm section of Reingold (mostly) and Lehrmann is unerringly perfect for this project, and while their virtuosity is always within sight, they complement Anderson’s melodies beautifully, never threatening to overpower the production. On the contrary (bearing in mind the relationships and Prog hierarchy involved here, it stands to reason) Stolt has given Anderson’s choir-boy voice complete prominence in the mix, perhaps, resulting in a sometimes parsimonious mix for the band, especially the drums.

With the album largely created by Stolt and Anderson swapping audio files online, it might sound in places that a few too many separate piecemeal themes were sewn together to create the longer compositions.  However, just when the listener begins to think that it might be starting to sound somewhat bitty or directionless, each composition seems to resolve and, ultimately, one is left not caring. After a few listens, they suit the aim of the project admirably, and succeed in leaving the listener blissfully fulfilled.

An organic, majestic, mystical, wondrous, richly-woven tapestry of melodies, this album succeeds because Stolt’s experience as the Third Wave’s hero of long Prog compositions blends beautifully with Anderson’s invention of the genre in the First Wave. It succeeds not because of who they are, but because of what they have done with it.

It started on a boat outside Miami, and the evidence is now here for us all to enjoy. No wonder Roine Stolt was beaming.