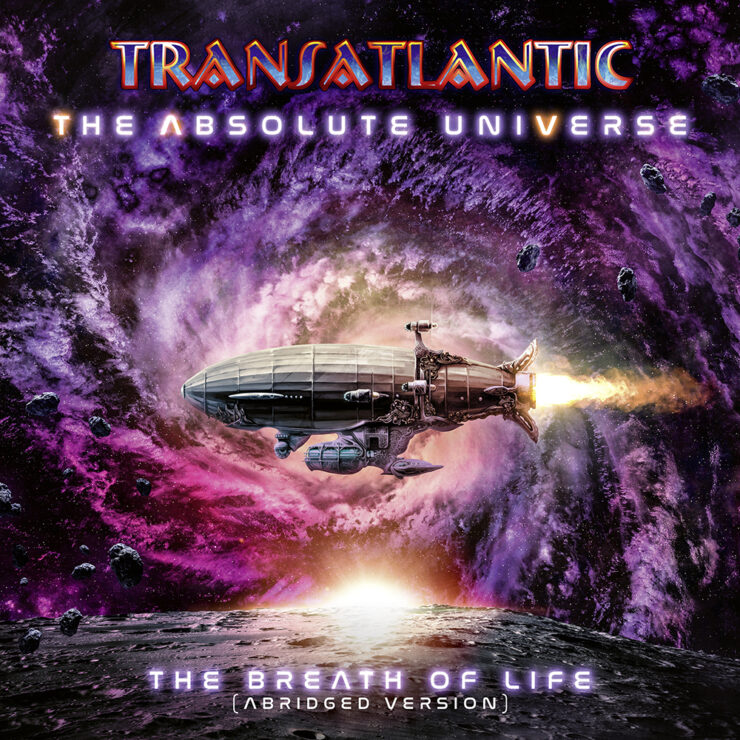 Review of Transatlantic – The Absolute Universe: The Breath of Life, out on Feb 5th, 2021.

Fans often explain that one of the joys of the prog genre is that greater rewards are reaped on the 5th, 10th or 20th listen to a piece of music which you may not get on the first hit. So my dilemma when I received copies of both The Absolute Universe Forevermore and The Breath of Life albums by Transatlantic was – how do I tackle this in a way that I get the most benefit from this incredible original approach to a release. Well, I decided to start with The Breath of Life and spend time getting to know it before diving into Forevermore.

We’ve known since September 2019 that an album was in the works and we also know all sorts of things happened that meant it’s taken a bit longer than normal to get here. So what we have is a single disc of tracks, linked together with and interweaving themes similar in format to The Whirlwind (as compared to TA 1,3 and 4). And I think it’s fair to say that this version has some very close parallels with that album.

The opening overture and first song “Reaching For The Sky” kick things off in true, majestic Transatlantic style. I have to admit hearing that combination of Portnoy drums, Stolt guitar, Trewawas bass and Morse Hammond organ is like a joyful reunion with old friends wafter a period of absence. We dive straight into an overture laden with themes and variations hinting at what lies ahead, like all overtures it gains a depth of appreciation when you’re familiar enough with the rest of the album to pick out the references. The overall feeling is – the gang’s all here, and they’ve got lots to give!

We know from interviews with the band that Neal Morse was given control of this version and elements of the material were adapted, given new lyrics, reconstructed and reshaped. The overture gives way to “Reaching For The Sky” and there is so much that can be said about this song… we have Neal, Pete and Mike taking lead vocals… we’ve got “a heart like a Whirlwind”… and we’ve got references to these pandemic times – “mask” “locked away” “hit the streets and you get arrested”. The melody and lyric exudes some sort of joy within the chaos and the search – just listen to those piano glissandos!!! – before moving to a sense of reflection in the “far and away” ending which precedes a signature Stolt ‘wah solo’. “Higher Than The Morning”s jazzy bounce begins with the “Belong” theme, before moving into one of the main lyrical themes… how selfishness and self reliance are traps we can easily fall into, to our detriment. We glide from here to “The Darkness In The Light”, the first distinctive Roine lead on the album, which combines an intricate, quite funky style with a Dylan-like inflection in places. This album takes the band’s vocal interplays to the next level, carefully applied to add color and contrast – a great example of this being Neal’s echoes of Roine’s lyrics in the chorus. That continues in the next track, “Take Now My Soul,” which gets an extra lift when Mike Portnoy sings verse 2. For people wondering, this song is a good one to illustrate the differences between the album versions. On Forevermore, this slot is filled with a song called “Swing High, Swing Low”. Verse 1 of each song has the same melody but where “Take Now My Soul” is quite stripped back, “Swing High”… has extra acoustic overdubs and atmospheres right from the start, and this continues as the song progresses. They both reach the same guitar solo, and instrumental play out, with the spacier Take Now, contrasting with the more dense “Swing High.” Put it this way: I like chocolate ice cream and I like strawberry ice cream. It’s a great thing that both exist and on a given day I may choose one – but that’s no reflection on the other! I’d also point out that as with “Reaching For The Sky,” the “Take Now”… lyrics contain further allusions to (escape from) lockdown which cements this lyrical theme, less evident on Forevermore.

The Mike-sung “Looking For The Light” comes next and it’s one of the albums heavier, but no less melodic, moments. Lyrically the theme is ego and selfishness, with references to objectivism/ Ayn Rand (but this is no philosophy lesson!) and of course the music is incredible… after a few listens you’ll start picking up the cross references that appear in the end section of this track and… watch this space cos it will be back. A foreshadowing of the finale, “Love Made A Way” comes next, before we take off into the very proggy “Owl Howl”! There are incredible dynamics here, colliding time signatures and cool atmospheres such as the appearance of a Mellotron flute duetting with Pete’s bass, before the police siren chatter of the Moog solo breaks in, its dissonance gradually becoming more melodic, before collapsing in static. The air is clearer for some Floyd-y swells over a piano backing, as Pete’s vocal joins to present “Solitude”, one of his vocal showcases. It’s a great contrast to the complexity of the earlier songs, and it builds to both reprise and foreshadow other musical elements of the album.

It may sound strange to anyone reading this review in advance, but don’t be concerned when I say that what sounds like the voices of Minions herald what is the incredible closing salvo of this album – you’ll know what I mean when you hear it! The track “Belong” while being less than 3 minutes long is a payoff of a musical theme which you’ve been hearing but probably not realizing throughout the album, and has some very cool slightly jazzy Roine lead guitar work and corresponding Hammond organ.

“Can You Feel It” is the unique track that you get on Breath of Life which doesn’t appear in the other version. Neal comments in the Making of video that he thought he had presented it to the band at the writing sessions in Sweden, but realized he had forgotten about it… and well I’m glad he remembered it! It’s a rallying cry style song, heralding what’s coming and blends perfectly into the Reprise of “Looking For The Light,” an instrumental workout which, like the video for the single, takes us on what feels like a journey through space or time, building in burgeoning intensity to the peak of Neal’s vocal part, joined by Mike, expressing the desperation of isolation and self reliance, but encouraging you to not give up the search for the light within the darkness. A double time section builds to a series of staccato rhythm-laden breakdowns which conjure images of striving toward a goal that we reach with a tempo shift into Pete’s vocal standout of the album in “The Greatest Story Never Ends.” Can I ask you to listen out for one of my album highlights… a very small thing, but wait for the two pipe organ chords which get repeated in this track… you’ll know it when you hear it! The pace in the closing instrumental section is relentless and it’s master-class in the sort of arrangements and performances that we’ve come to love from this band.

The album closes with a suitably grand finale, as the intensity of the previous 15 minutes fades to a Morse piano and vocal, lightly supported by the band. When the TA group harmonies kick it, it will bring a smile to your face, while, lyrically, we get the resolution to the earlier searching in the chaos… “free, cos it costs nothing… love, even down to me”. Oh , and stay tuned because rather than crashing to an end, there is a very cool atmospheric play out on the album, like a post-credits sequence!

Trying to stand back and look at this 64 minute album on its own merits, this is the sort of album I would happily give to any musical explorer as being one of the very best examples of the genre today. Once again, Transatlantic have blended their four personalities to produce an album that is packed with melody, harmony and clever arrangements, musically complex, with a contemporary lyrical concept. My instant reaction to my first listen was to simply go back and start my second one!

Released on Feb 5th, 2021 on InsideOutMusic
Key Tracks: Reaching For The Sky, Take Now My Soul, Can You Feel It