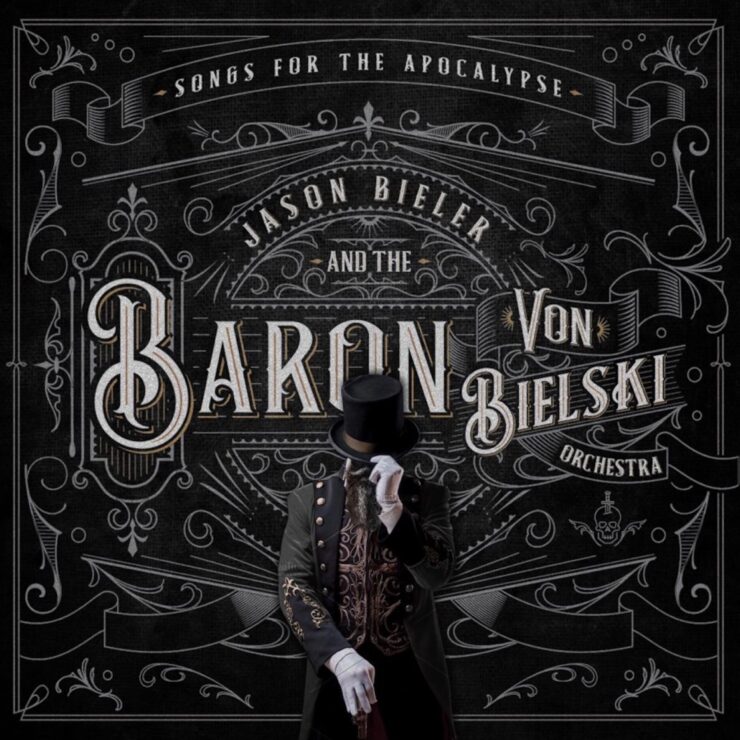 Review of the Jason Bieler album ‘Songs For The Apocalypse,’ released on January 22, 2021

Not one to normally travel in the world of prog, rocker Jason Bieler, known for his time as guitarist/singer and songwriter for 90s rock band Saigon Kick has created an album that is perfectly titled for these times in ‘Songs For The Apocalypse.” Listed under the moniker Jason Bieler and The Baron Von Bielski Orchestra, the album presents a diverse array of styles and finds Bieler working with an eclectic group of musical friends including some notable prog rock names, such as Todd LaTorre (Queensrÿche), Devin Townsend, Bumblefoot (Sons of Apollo), Pat Badger (Extreme), Butch Walker (ex-Marvelous 3), ,Dave Ellefson (Megadeth), Clint Lowery (Sevendust), Benji Webbe (Skindred), Kyle Sanders (Hellyeah) and more.

It is hard to know what to expect going in.  Bieler has always been an eclectic artist going back to the early Saigon Kick albums like platinum selling The Lizard and the extremely diverse Water, their last on Atlantic Records.  Since that time, Bieler has run a successful record label, putting out albums from bands like Karnivool, Sikth, and Nonpoint, as well as releasing more than 100 songs of various styles on streaming platforms.  But this is his first official solo album, and it is a quite impressive outing.

Fans of classic Saigon Kick will immediately recognize Bieler’s style in the main opening track and first single “Apology”, a powerful, heavy track with the catchy chorus filled with his unique harmony style.  There could not be a better track to kick off the festivities.  The next track, “Bring Out Your Dead,” gets even more aggressive and features an unexpected solo by Devin Townsend, not known for guesting on many albums.

From here is where things really get interesting.  “Annalise” is a completely strange yet captivating track that channels Beiler’s inner prog musician.  The various time signatures of the drums, guitars, and vocals, all playing off each at once shouldn’t make sense, but it completely does.  This is one of the highlights on the record and as a listener, you can’t help but think, what might be next?

You have three rock tracks up next. “Stones Will Fly” enters Foo Fighters territory with the drums heavy on toms, building towards a grungy chorus, “Down In A Hole” a darker entry with a latin-groove breakdown, while “Anthem for Losers” is a fist-pumping arena rock jam.  But, the next few tracks that follow are completely different.”Horror Wobbles The Hippo” is a dark instrumental with some great guitar work, “Beyond Hope” contains a reggae-style rap, while “Crab Claw Don” is half circus anthem and half gorgeous ballad.

“Born in the Sun” reintroduces the heavy guitars with a riff that would work on a Dream Theater track. “Alone in the World” is pure Saigon Kick with the signature tom-tom drums and vocal harmonies. The last full track “Very Fine People” is a sarcastic acoustic ballad where Bieler sings “We all need love, we all see who you are.”

This is a completely fun, interesting, and entertaining album that is heavy, melodic, and diverse.  It is a great reminder to Saigon Kick fans why that was one of the 90s most underrated bands. Welcome back Mr. Bieler. Highly recommended.

Key Tracks: Apology, Bring Out Your Dead, Annalise, Born of the Sun