The Tangent – The Slow Rust of Forgotten Machinery (Album Review) 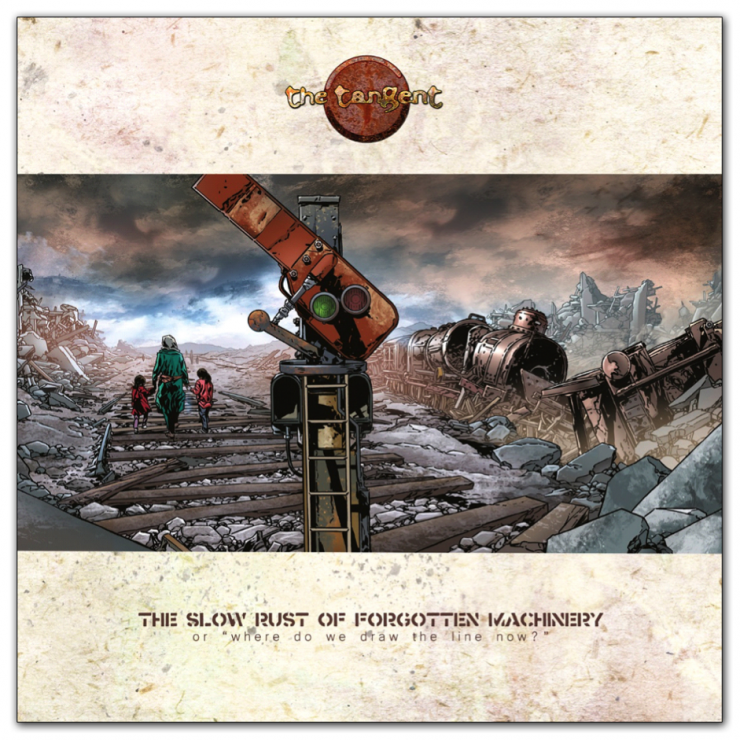 Review of The Tangent – The Slow Rust of Forgotten Machinery out on July 21st, 2017 on InsideOut Music

It is clear that Progressive Rock musicians care about the current state of the world and like to provide commentary on it (have a listen, for example, to Marillion’s “F.E.A.R.” and Steve Hackett’s “Night Siren”.)  The Tangent’s Andy Tillison is no exception. Consequently, commentary on the ‘border wall politics’ prevalent in today’s world, the role of the media in this phenomenon, and the current plight of international refugees, form much of the lyrical content of The Tangent’s latest album “The Slow Rust of Forgotten Machinery”.

Tillison is highly respected as the driving force behind The Tangent, being not only its main composer, but also its keyboard player and vocalist. But what is not universally known is that Tillison is also a highly competent drummer. On this studio release (The Tangent’s ninth), Tillison performs all drums, keyboards, and some vocals. He is joined by guitar virtuoso Luke Machin, bass maestro Jonas Reingold, sought-after saxophonist/flautist Theo Travis, and new member Marie-Eve de Gaultier (Maschine) on keyboards and vocals. It is an impressive line-up indeed. There are also guest appearances from author/Chumbawamba vocalist Boff Whalley, and a DJ/producer named Matt Farrow. (Yes, that’s right, a DJ – more about that later.)

Four of the five songs on the album could be classified as “epics”, varying between 12 and 22 minutes in length, and those epics traverse the political topics described above, in detail.  Opening track “Two Rope Swings” is the exception. Not only is the song shorter, at 6 minutes, but it also deals with alternative subject matter, namely the fate of wild animals in the 21st Century consumer economy. The song is almost a synopsis of the musical style that is expanded upon in the subsequent songs, only with more use of vocal and guitar harmony. De Gaultier’s gorgeous voice is introduced here and it immediately complements Tillison’s baritone in a very admirable way. Female backing vocals suit The Tangent’s music – so much so that it is strange to think that this is the first time a female voice has appeared on a Tangent album in 10 years. I have become extremely fond of de Gaultier’s voice in a short time – she brings a unique flavor and a great sweetness to Tillison’s vocal lines. Reingold’s staggering, stuttering bass runs are immediately apparent, Machin is massive, Travis’ flourishes are ubiquitous, the instrumentation is strong, and the Tangent are back. The animals in the song might be dying out, but this particular musical herd seems to be thriving.

Second song “Doctor Livingstone I Presume” is an instrumental jazz-rock tour-de-force built around a polished Tillison/Machin riff. This expansive clarion riff, in various guises, pops in like a welcome friend throughout the piece, which explores (pun intended) every possible avenue, giving the band room to flex its instrumental muscles. From jazzy flute to heavy cinematic guitar-scapes, all the instrumental theatrics one would expect from such fine musicians, are there. This song shows The Tangent’s intent to show that they have returned, with a fearless instrumental bang. It is interesting that Tillison’s drumstick count-in at the song’s start is not edited out of the master recording (perhaps an intentional message that he is still very much in control.)

“Slow Rust”, the 22-minute core of the album, returns the band to more traditional Prog vocal fare, and unashamedly shows Tillison’s love of traditional Prog giants like UK, Yes and Van der Graaf Generator. The lyrics are suitably weighty, dealing with such topics as the Illuminati, tabloid reporting, fake news and the victimization of migrants by the press. It is a scathing criticism of populist media, with snarling, in-your-face lyrics like “We can build an army”, “you are a traitor”, “corporate automatons”, “to sell papers…it’s all we’re here to do”, and “one day they’ll tell their story how they followed their railway lines across the sea so they could break free”. Musically, it is again apparent that de Gaultier’s vocal counterpoints somehow make Tillison’s voice sound better than ever. She really is a welcome addition to this band (not that the rest of the band are anything less than virtuosos when it comes to their own vocal contributions.) The verse, in which the vocalists play off each-other over a slow, intense snare shuffle, is my favourite part of the album and the bridge “We don’t know who’s coming in…” is a close second. The chorus “Rusting, rusting slowly…” is jarring, in keeping with its theme. Instrumentally, the song keeps up with the subject matter with kaleidoscopic variations that are both progressive and excellent, and Machin’s solos are as immense as Reingold’s thunderbolt bass-lines. In typical Tangent fashion, keyboards form the prevalent foundation in most parts, only this time there are two ivory-tinklers, and it works. It is also possibly on this song that Farrow’s contributions are most apparent, but his “DJ” title notwithstanding, this song is about as far-removed from dance music as you will ever find. It is a full-on Prog extravaganza. The song climaxes in a moment of mighty metal madness, and ends with a slow and contemplative reconciliation that reflects Tillison’s mood about the state of the world. Epic indeed.

“The Sad Story of Lead and Astatine” is a slight departure for The Tangent, in that every member is seemingly given a solo spotlight. ‘Astatine’ might be a radioactive chemical element, and the song is indeed luminous jazz-prog, but the lyrics are more personal. It starts slowly, with Jonas Reingold playing a traditional double bass for the first time on a Tangent album, while Tillison plays some of the drum-parts with brushes. It is difficult to know which keyboardist features at any given point, but by default, jazz plaudits are due to both. Travis and Machin are given much space to impress in the various jazzy meanderings, and Reingold delivers a bass solo that is just astounding (dare I say ‘incandescent’?) The song builds to a galloping crescendo in which the whole band shines. The flame-haired leader of the band delivers a tasteful drum solo, and his prowess behind the kit is impressive. Amidst the various solos there is even a scat vocal/guitar part, in which de Gaultier easily keeps up with Machin, again showing her value to the band. The guitar climax is very fluid and satisfying, and admirably exploits the affinity between jazz and Prog.

Last song “A Few Steps Down The Wrong Road” is largely a political poem with complex musical backing, since the lyrics are in large part spoken more than sung. And cutting lyrics they are – Tillison is determined to impart his angry message about nationalism, money, power and greed. It is true that spoken word can become tiresome if one is not firmly attached to the message, but Tillison’s passion reduces the risk of this. The 17-minute epic includes a cynical rendition of familiar patriotic anthem “I Vow To Thee”, woven into the fabric of the song with alternative lyrics, leading into a biting punk-rock break that exhibits Tillison’s anger perfectly. Then, a unique ending is presented: Brexit seems to be in the forefront of his mind, but Tillison handles it in a very clever way (spoiler alert): “Just days after the decision was made, the new leaders of the country sat down together and began to talk about how they would make good on the pledges they had made. Within minutes any casual observer would have realized that these guys haven’t even made a plan. For example, it’s very easy to promise that you will rid the country of a migrant problem. It’s a lot more difficult to actually deliver it.” The new leader proceeds to delegate the settlement of the problem to a senior official in his new government, and the response comes: “Jawohl Mein Führer”. With something short of a sneer, Tillison adds: “Well, what did you think I was talking about? Please wake up.”

Literal but effective, “A Few Steps Down the Wrong Road” is one of the most interesting Prog songs I have heard recently. It takes brazen risks in that it incurs the possibility of alienating the listener due to the overwhelming lyrical weight. But here’s the thing – I found myself wanting to listen to it again and again, even though I knew (by then) where the lyrics were going. The song is weighty but eminently listenable. This epic exhibits Andy Tillison’s musical declaration that he is, indeed, far from spent.

The album has a sumptuous warmth and is well produced by the prodigy that is Luke Machin, who gives it a full, clear and pleasing mix. It features high-quality artwork reflecting the migrants’ journey on the railway tracks and the other themes, from Marvel/DC Comics artist Mark Buckingham.

In 2015, Andy Tillison suffered a heart attack after which he took some time to recover. Some worried that he might not return to his previous levels of musical productivity and quality, but they need not have feared. On the contrary, this is the best Tangent release since 2003’s debut “The Music That Died Alone”. ‘The Slow Rust of Modern Machinery’ is complex, adventurous and clever, and it succeeds in blending traditional Prog and jazz-fusion expectations with the best type of forward-thinking musical chicanery. From the literary perspective, the album approaches difficult lyrical themes with a bold aggression that I have seldom heard outside the realm of pure poetry. This approach could easily have failed as being too literal, but somehow, Tillison’s passion tempers this, and the album undoubtedly succeeds. From the musical perspective, it is simply masterful, as one would expect from musicians of this calibre. The Tangent are indeed back.