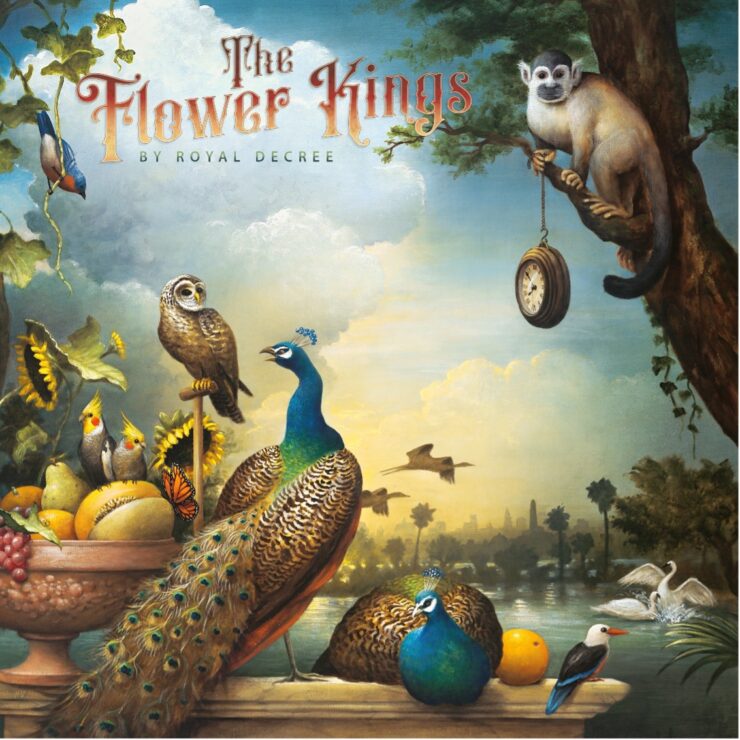 Review of The Flower Kings new album ‘By Royal Decree’

When The Flower Kings released Desolation Rose in 2013, followed by a hiatus and two career spanning box sets, it could have been assumed that was the end. Glimmers of hope appeared in 2018 when Roine Stolt issued Manifesto of an Alchemist as Roine Stolt’s The Flower King, and we had “The Flower Kings” albums in 2019 and 2020, both of which were doubles! So it’s amazing that less than 18 months after Islands, another album is coming, and it’s another double!

With drummer Mirko DeMaio and keyboardist Zach Kamins well established in the band, this time bass guitar duties are split between Jonas Reingold, and brother Michael Stolt, a founding member of the band. With much lockdown recording over the last few years, the band were determined this time to be in the same room to create this music which combines new compositions, with some ideas from previous albums that didn’t reach completion, and even some ideas that date from before TFK’s first album. Stolt describes the album as “a journey through my history as a writer and my ‘middle age’ saga reflecting on that”… so, how does it sound?

The 92 minutes of music is packed with melody. Sonically it sits very firmly in the Flower Kings sound – which is as they describe the “melting pot of folk, symphonic, electronic, jazz, blues, funk & 70’s prog”. There are plenty of prog moments and motifs, but actually the music is more melodic than it is complex.

With 18 songs, there’s a lot of music here… here are some of the highlights for me. Opening the album, “The Great Pretender” combines all the elements I’ve mentioned above – when Hasse Froberg’s distinctive vocals kick in, this song crystallises as a classic album opener. “World Gone Crazy” is apparently an older song, but the lyrical themes certainly resonate today! Jazzy, almost Zappa like in places, it contains a stirring chorus, some fantastic keyboard sounds and an almost Holdsworth-like guitar solo from Roine.

“A Million Stars” is a classic song, driven by a 12 string acoustic guitar, with an almost Transatlantic vibe. And “We Can Make It Work” is one that Roine has said he thinks he did offer to Transatlantic previously – it’s got a nice pop/ Beatles vibe that would fit with that band, but equally it’s great here being performed by TFK!

Disc 1 closes with “Revolution” – despite only being 6 mins long, it’s structured like a prog epic, with an overture, a pulled back verse section which builds into a variety of different segments and phases. The ending is magnificent, with Roine joined by Hasse on vocals – it’s certain to be an amazing in-concert moment!

After the epic-ness of much of disc 1, Letter on CD 2 has a lightness and humour both musically and lyrically. It feels like a side of TFK which doesn’t often get explored… and there are accordions in it! “Evolution” is a very strong instrumental track which showcases all the skills within the band, in a funky, almost American-cop-theme-tune way, while Moth is a piano based, atmospheric showcase for Roine’s distinctive vocal. Contrast comes with “The Big Funk,” the mini-epic that follows, which has a nice guest appearance from Rob Townsend on saxophone, as he appears in several other places. “Open Your Heart” is a fantastic positive anthem “Open your heart, from behind that sorrow… and as you see the world… you’re not alone… whatever’s lost can still be found”. The short piano piece Shrine, leads to another mini-epic called “Funeral Pyres.” Starting with a David Gilmour-like opening guitar piece, this quickly morphs into a TFK classic. Packed with proggy moments and motifs, headed towards a bombastic conclusion with a ‘Tron and a gong!

Anyone concerned that such prolific output might result in a dip in quality should cast those concerns aside immediately. When you put everything on this album together you have a great set of Flower Kings songs and performances that consistently hit a high standard. I know we will certainly be talking about this album as one of the best of 2022 when we look back at the year!

You can order the album now here:
https://theflowerkings.lnk.to/ByRoyalDecree