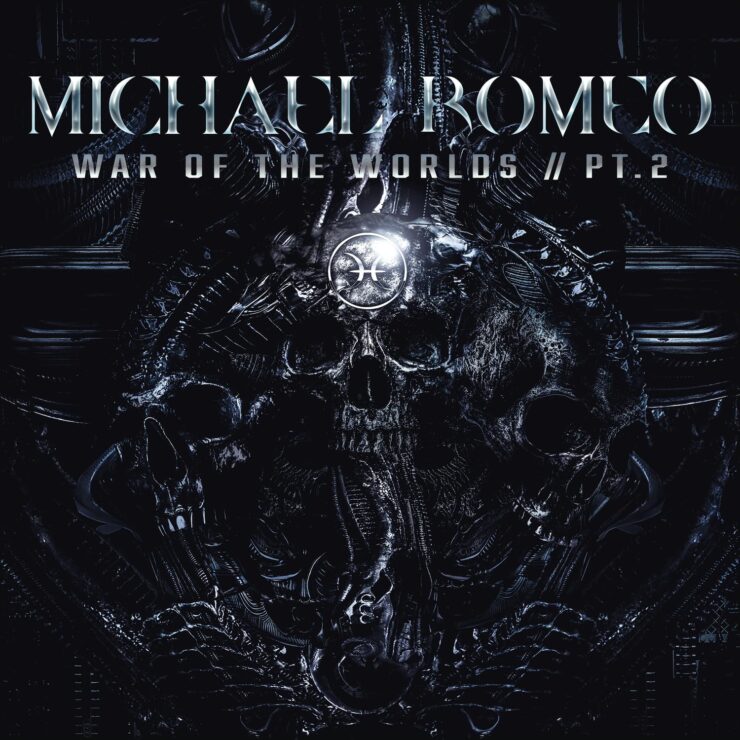 Review of the new Michael Romeo album ‘War of the Worlds, Part II’

Back in 2018, Michael Romeo released his first solo album in 20+ years, War of the Worlds, Pt. 1. Lyrically and tonally based on H. G. Wells’ book with the same name, Romeo delivered a heavy, diverse album with lots of guitars & cinematic orchestral instruments. My review for Pt. 1 was one of the first I wrote when I first joined The Prog Report, and that is an album I often and happily revisit. It’s well known that Romeo, the man behind Symphony X, likes to take his time to perfect his craft – so, after almost 4 years, he is finally back with War of the Worlds, Pt. 2.

This album brings back John Macaluso on drums and John ‘JD’ DeServio on bass, whose performance on the first album was astounding. However, this time they are also joined by the insanely talented singer Dino Jelusick. With this team alongside Michael Romeo (on guitars, keyboards and leading his synthetic orchestra), you can already expect a record filled with toplevel musicianship from the lineup alone.

War of the Worlds, Pt. 2 begins with one of many shorter instrumental pieces in the album. “Introduction – Part II” sets the tone for the album displaying Romeo’s excellent orchestral arrangements while also revisiting some motifs from the first album, reminding that this is, indeed, a big conceptual progressive piece.

The band kicks in with full force on “Divide & Conquer”. If you were even mildly familiar with Romeo’s work, you would be able to recognize his playing from these initial riffs alone. This was the first single released – I particularly love the half time on the intro. The catchy chorus is also great and Jelusick’s vocal reach is absolutely mind blowing. An impressive video of Romeo playing the guitar solo for this song was posted online, you can watch it here: https://www.youtube.com/watch?v=zEHbe2Wtch4

Romeo premieres his seven-string guitar on “Destroyer”, a heavy, aggressive and groovy song with a bit of an Eastern vibe to its melodies. It is interesting hearing his style of riffs with a lower tone – he also brings back the seven strings on a few other tracks on the album, but this one is an excellent showcase for it. “Metamorphosis” is one of my personal favorites on the album. It’s not as heavy as the previous two tracks, but it compensates in its melodic intricacies. Dino Jelusick’s delivery on the multi-layered chorus is definitely one of the highlights of the album. His performance here shows how powerful his voice is. The next track is the symphonic instrumental “Mothership”, led by military drumming and echoing choirs, it brings back the thematic of “conflict” present throughout the War of the Worlds duology.

A much-needed breather comes in the form of “Just Before the Dawn”, the softest song in the album and the closest we get to a ballad. The electric guitars complement the beautiful piano sequences in an amazing way that is very unique to Romeo’s style. We’ve heard this sort of style on songs like “Believe” on his previous solo album as well as Symphony X’s famous “Paradise Lost”. As always, the guitar solo is breath taking. Next up is the track “Hybrids”, a darker tune that has everything to be a fan favorite. The instrumental section for this song is insane, the twists and turns are everywhere through Romeo’s classically inspired usage of key changes. The final minute goes into a melodic slower bit that flows seamlessly into “Hunted”, a longer instrumental tune. Revisiting the main theme of the duology, this song could easily be inserted into numerous action film’s OSTs. Romeo shredding over epic soaring horns is one of War of the Worlds’ craziest moments.

To pick up the heavy action again is “Machinenmensch”, the longest song clocking just over 9 minutes. It wastes no time in introducing some of the heaviest and fastest parts of the album, and John Macaluso shows some hugely creative drum fills across the many evolving riffs in this kickass song. His groove underneath Romeo’s solo in an odd-time signature paired up JD’s bassline is a delight to the ears. “Parasite” also keeps the heaviness with thrash metal sounding riffs on the verse akin to the classic bands in the genre. Lots of double bass and fast shredding through the whole song.

The credits roll to the sound of “Brave New World (Outro)”, another instrumental track to close the album. This one proves the definition of the word ‘epic’, especially after the choir enters and Romeo’s tremendously melodic and inspired final solo follows suit. But, you’ll soon notice those were fake credits rolling… If all that wasn’t enough, there are two extra tracks that push this album beyond the one-hour mark. They’re both as good as anything on the main album and are definitely worth mentioning. “The Perfect Weapon” & “Alien DeathRay” are surely closer to what we’re used to with Romeo’s albums finales. The former being an insane progressive metal song with syncopated riffs, epic orchestrated instrumental bits and with Dino Jelusick hitting his highest notes while still keeping the drive.

Moreover, my theory is that Romeo had two excellent closing tracks written, couldn’t on which one to pick, and then just used both. “Alien DeathRay” echoes “Brave New World (Outro)” in being an epic ending to a high octane, insanely dense journey of an album. Macaluso’s last drum solo here is just insane too. One of the endings is very hopeful and emotional, while the other is more tense and suspenseful. Makes you wonder if we have really reached the end of this story.

It was rather challenging to pick my favorite moments due to the album flowing so well from song to song. When I first got the album, it was hard to tell one track from the other until I got more familiar with its themes and assembly. Even though it has a similar structure, War of the Worlds, Pt. 2 is both longer and heavier than its predecessor; which makes it not an easy listen if you’re not used to this kind of music. However, if you’re already a fan or willing to put some time into some intricate songwriting, you’re in for a ride.

New music from Romeo is always a treat. His attention to detail is unparalleled and that’s apparent in all aspects of his music; from composition to production. I stand by my statement from my previous review that he’s found the perfect outlet to experiment and work with different musicians. He’s able to go crazy with the orchestral themes and the overall heaviness while still keeping its own identity separate from Symphony X. One thing is certain, though – whatever music Romeo works on is gold, and that rings true for his new album War of the Worlds, Pt. 2.