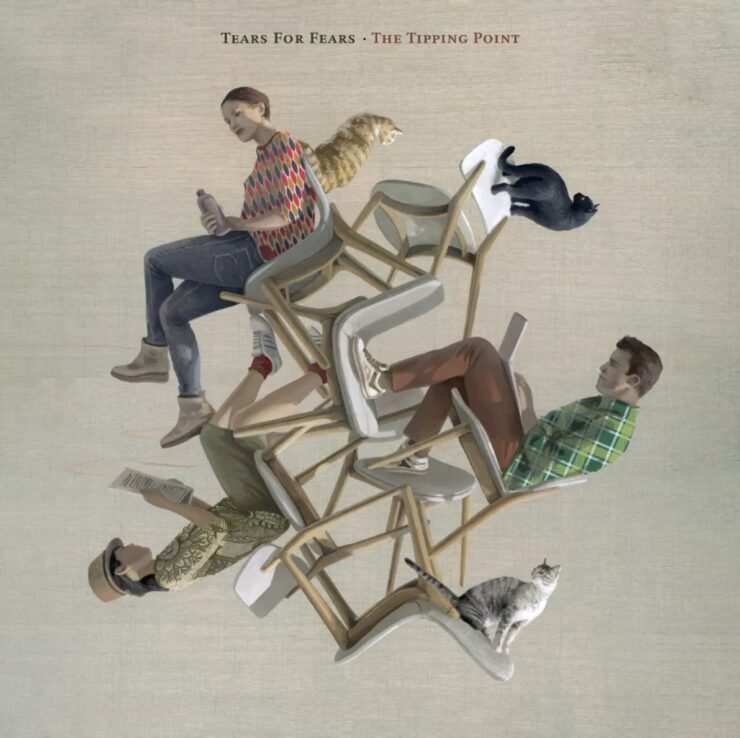 Review of the new Tears For Fears album The Tipping Point

17 years is a really long time between albums. Is it even worth returning after such a long hiatus? It had been more than a decade since the hit-making duo Tears For Fears released their first reunion album 2004’s Everybody Loves A Happy Ending (following a nine year split), and that attempt didn’t seem to make many waves at the time. But since the years following that release, the group’s profile has raised tenfold with their songs consistently appearing on TV and radio, as well as covers of some of their classic songs from notable trend-setting pop artists hitting the charts. Additionally, Tears For Fears had become a full fledged touring machine.  It wasn’t until they started getting bored playing the same songs every night that they decided maybe they should try making some new music.

As has been documented in many interviews online, the duo tried writing with some modern-day hitmakers at the behest of their management.  But, both Roland Orzabal and Curt Smith felt this wasn’t true to what they were about and after months of those writing sessions, they decided to start from scratch, keeping a few select ideas from previous sessions.  The result is the splendid new album, The Tipping Point, perhaps their best release since The Seeds of Love, and a true return to form.

In a recent Rolling Stone interview, Roland described how the writing sessions finally got on track with the album’s opening song “No Small Thing.” “In early 2020, Curt and I sat down together with just a couple of acoustic guitars. The first time in decades. We needed a meeting of minds, a coming together psychically. We were literally going back to the drawing board looking for some depth, heart, and soul with which to complete our album. Curt came up with this simple folk/country riff, a little bit Dylan, a little bit Johnny Cash, and then we were off.”  The track is unlike anything they have written before and is a definitive statement as an album opener.  The opening acoustic section gives no inclination as to where the song is bound to go, but by the end, there are bombastic drums, noises, distorted guitars, and more all building to a brilliant crescendo.  It is an epic way to kick things off.

The title track, and first single, is next, and it immediately is a reminder of the band’s 80s era with a driving groove that recalls “Everybody Want to Rule the World,” although the message in this single is much darker, written around the passing of Roland Orzabal’s wife.  The group’s debut album was written about angst and using music as a way to cope, and this song falls right in line with that.

While the first two songs find Roland and Curt sharing vocal duties, the rest of the album finds them each singing the songs that they started the writing on.  There are a number of highlights for both including Curt’s song about women taking on the patriarchy in “Break The Man” to the delicate but beautiful “Long Long Long Time.” Roland presents a number of strong tracks as well, namely, “Rivers of Mercy,” about these tough times in the world, or the Beatle-esque “Master Plan,” one of the outstanding gems in this collection, where Orzabal exclaims “Need a lot of rage to get by these days… you need a lot of faith to reach the sun.”

Every Tears For Fears has its distinct voice and sound whether it is the commercial pop sensibility of Songs From The Big Chair or the elaborate prog favorite The Seeds of Love. Even the albums released only with Roland Orzabal as Tears For Fears (Curt Smith split in 1989), the alternative leaning Elemental and heavily guitar influenced Raoul & The Kings of Spain are fantastic records.  But there is something about these two when they work closely together that is the magic of the group, and that is found on this album.

Everything about this album, from the production to the variety of material, works amazingly well. There is not a bad song or wasteful moment of filler on it. The collection offers a cathartic, emotional and hopeful view of these current times, conveyed in a way only these two, weathered and experienced artists working together, could provide.  It is a brilliant album that deserves its place among the best albums of the year. Tears for Fears have proven that no matter how long it takes, it is worth getting it right, and with The Tipping Point, they absolutely have.