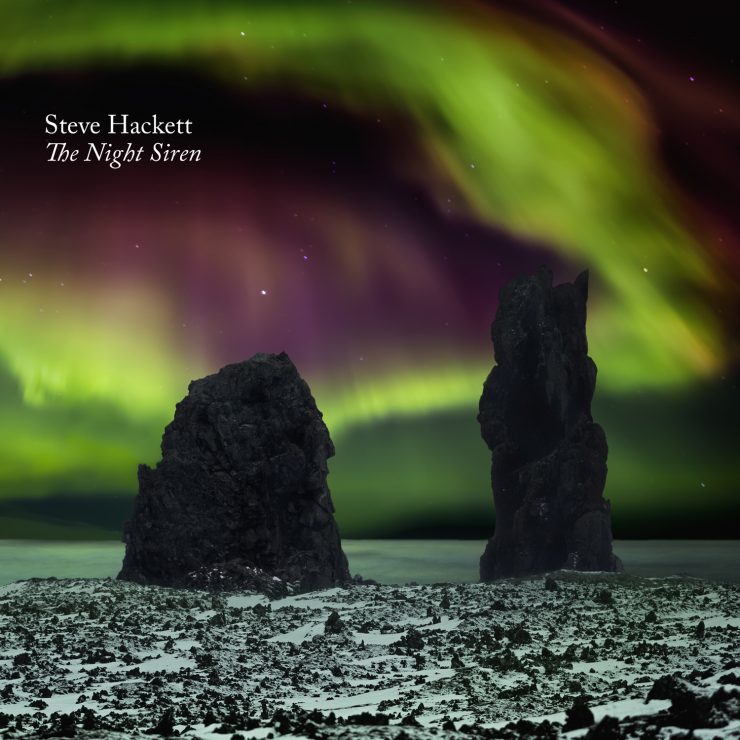 Review of the new album from Steve Hackett, The Night Siren, released on March 24th, 2017

In these troubled times of closed borders, refugees, talks of exits from international coalitions, walls between neighboring countries and general international polarization, there could hardly be a more apposite theme than (in Hacketts own words): “a bird’s eye view of the world of a musical migrant ignoring borders and celebrating our common ancestry with a unity of spirit, featuring musicians, singers and instruments from all over the world. From territorial frontiers to walled-up gateways, boundaries often hold back the tide. But while the night siren wails, music breaches all defences”. These words should alert you, dear reader, to the fact that this album will feature some international sonic explorations.

The term “living legend” is used all too loosely these days, but few would argue that Steve Hackett is deserving of this description.  But, living legend that he is, none can deny that Hackett is fearless. Cultural diversity aside, the allure of Hackett’s guitar-playing remains peerless, and it is comforting to know that it is always there, ready to rescue the purists if the international experimentation becomes in any way tiresome.

There is a strong theme (the historical plight of refugees and the hope for a more unified world), there is an orchestra, there is a choir, there is (most of) Hackett’s amazing band, there is Flamenco guitar, there is flute and mandolin, there is Prog, there is Rock, there is a mixture of styles, and yes, there is world music. And yet, there is always Hackett’s unmistakable electric guitar.

“Behind the Smoke” starts the album gently with a flamenco-style intro but soon turns into a massive grinding riff that suddenly, mid-song, reveals Hackett’s intention to expose his world music proclivities, with an eastern-sounding interlude. Soon enough, though, the massive wailing Hackett electric guitar that we know and love, returns to end the song.  The second track, “Martian Sea”, is a quick-paced, pop ditty that relies on Gary O’Toole’s cheerful and up-beat drumming. It has a catchy hook and a nice Hackett solo. Again the international influence is to be found in the sitar and violin interludes, which sound more Eastern and Middle-Eastern than Martian.

“Fifty Miles From the North Pole” is a slow and solid track with a James Bond-themed guitar sound. 007’s presence notwithstanding, the song conjures images of icy, arctic travel undergone by our poor protagonist, without the resources of “M”, nor indeed anyone else, behind him. The solo is typical Hackett. The icy vocals are almost spoken rather than sung, and the Eastern influences are insistently present in the strings parts. One is just beginning to feel that the song could have been edited to be half the length, when Hackett stamps his authority with a great solo that could have been found on an early Genesis record.

Tabla-like percussion (perhaps played on an acoustic guitar) hints that “Anything but Love” might end up being pure world music, but inexplicably, a typical Hackett acoustic guitar solo then gives way to a pure and simple pop song that could be a top ten hit with the hook “But you’ll never get away with anything but love”. It even has a harmonica solo, and definitely sounds like BOC’s “Don’t Fear the Reaper”. It’s not GTR, but it’s a great pop song.

“Inca Terra” starts as a slow and gentle ode with mythical lyrics sung in pastoral harmony. It is the heart of the album, and given its theme, one expects a Proggy direction, and that expectation is fulfilled later in the song. At times it sounds almost like a Greek traditional hymn (is that a bouzouki?), but then Hackett shows his roots with an acoustic guitar flourish that leads into a complex and fast-paced arrangement, climaxing in a huge Hackett solo that any Progger will appreciate. Hints of classic Genesis in full flight appear towards the end. A very good Prog arrangement indeed.

“In the Skeleton Gallery” has been performed live quite a few times by now, While it is not an obvious “single” (does such a thing exist in Prog anyway?), it seems at the start to be one of the more accessible songs, but don’t be fooled. Slow and intense, it has a pleasing initial melody, but expect a dark, eastern-sounding woodwind interlude, and a quirky change of direction led by keyboardist Roger King. It then leads into a heavy Prog instrumental arrangement built around that quirky keyboard riff that also comprises the ending. King’s influence is strong on this one.

“West to East” is another story of international alienation and the need for the world to unite. While the instrumentation is suitably precise and excellent, up to the standards expected of a musician like Hackett, this song is all about the message. If you are opposed the exit of Great Britain from the Union, or certain immigration policies recently implemented by the US, expect to identify with these lyrics.  “The Gift” is a short instrumental closer that will please fans of Hackett’s traditional guitar achievements. It is sad, lonely and reflective and ends the album with due pensiveness.

Although not as immediately accessible as his most recent releases times, due to the many directions taken, as well as the many world music influences introduced, ‘The Night Siren’ is still a Steve Hackett album, and it is one worth investing in. ‘The Night Siren’ is an album with substance and an urgent message.  Expect to be transported to the East (or Middle East) from time to time, but expect your Prog hunger to be satiated as well. Perhaps Steve Hackett’s darkest work, it still has many great moments and reminds us we simply cannot ignore the fact that Steve Hackett is indeed a living legend.

Key Tracks: Behind the Smoke, Fifty Miles from the North Pole, Anything But Love