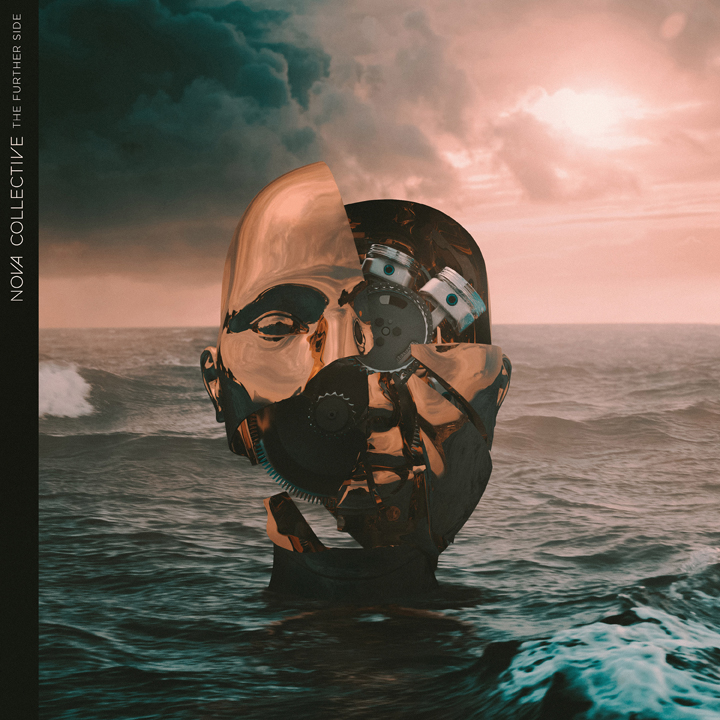 The Further Side by Nova Collective released on March 10th, 2017

New bands and supergroups emerge with regularity these days, but it is not often that they are great right out of the gate.  In the cases of instrumental groups, it is even more difficult to achieve a successful debut.  Often there is just a lot of mindless jamming that can be labeled as songs.  Nova Collective have defied the odds to produce a fantastic first album.  A group made up of instrumental superstars from a few very well-known progressive bands Between the Buried and Me, Haken, Trioscapes, and Cynic, the foursome’s new album ‘The Further Side’ is an energetic, creative, and enjoyable listen from the first few notes.  They describe themselves as “fusion, weaving progressive rock influences with world music, jazz and classical, to create something entirely new that is pure aural candy for prog/jazz fans.”

As is the latest norm with forming bands, often the members don’t even meet at first.  Bassist Dan Briggs (Between the Buried and Me, Trioscapes) and guitarist Richard Henshall (Haken) followed the trend by first exchanging emails about music in 2014. Demos turned in to full songs and drummer Matt Lynch (Trioscapes, Cynic) and keyboardist Pete Jones (ex-Haken) joined after to finish writing the album.  For any that follow these members’ bands, the same kind of technical prowess is fully on display throughout, but don’t expect death metal growling.  Rather, the group take a more fusion metal approach, with lots of clean playing playful arrangements.  There are no silly jams or wasteful moments.  Each phrase written is deliberate and performed with precision.

The first track and track to be released from the album, “Dancing Machines” is a perfect showcase of what this album is about. The song begins with the keyboards and guitars playing a lead melody in a crazy time signature before the explosive drums come in. Keyboardist Jones plays a key role in the music often leading the track’s bass rhythms on his piano. Henshall brings elements of what makes Haken so great into this track and the album, as well.  The second track “Cascades” has more of a straight forward Jazz-Fusion feel at times, but by the end is on full-on prog rock attack mode.  The recent single “Ripped Apart and Reassembled” is another barrage of notes played at light speeds with the keyboards again taking a large role.  The rhythm section of Lynch on drums and Briggs on bass are as dynamic a set as you will here, ripping through each song.  Throughout the album, the music is closer to that of  Chick Corea’s ‘Return to Forever’ than it is to these members’ regular bands, but there is plenty of rock in there to keep it heavy enough.

To describe the playing throughout the 6 songs in the collection is a futile exercise.  Instrumental albums are to be listened to and enjoyed.  To that end, we cannot recommend this album enough.  Get Nova Collective now!