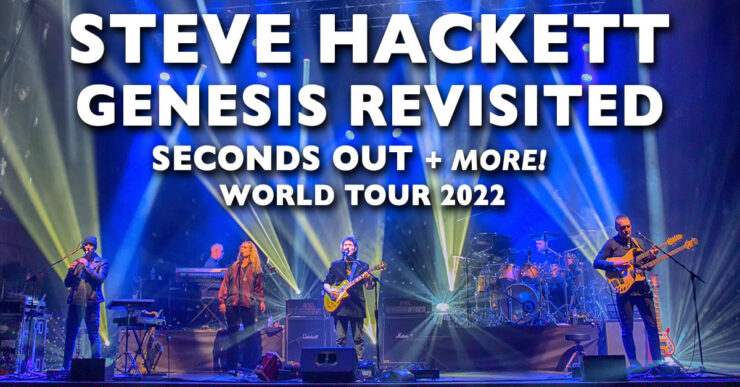 Progressive rock and guitar legend Steve Hackett will be revisiting his stellar work with Genesis when he launches the US/Canada leg of his Genesis Revisited: Seconds Out + More Tour next year (which is currently underway and playing to packed houses throughout Europe).

“I’m thrilled to bring ‘Seconds Out’ back to life, featuring Genesis material at its most exciting and virtuosic,” says Steve. “This time with all numbers played in full plus additional surprises!”

As advertised, the show will feature the 1977 Genesis live album ‘Seconds Out’ performed in full, plus additional Genesis classics and standouts from Steve’s latest album, ‘Surrender of Silence.’

‘Seconds Out’ was the hugely successful double album recorded on Genesis’ 1977 concert tour together with The Cinema Show, from their 1976 tour, and featured Steve Hackett on guitar alongside Mike Rutherford, Tony Banks and Phil Collins who had taken on the role of vocalist following the departure of Peter Gabriel. The tour included music from each of the six studio albums from Steve’s time in Genesis and marked his final recordings with the band as he left to pursue his solo career upon its completion.

“We’re touring the world again now, and I intend to continue,” says Steve concerning his future plans. “It feels terrific to be back in the saddle with such great audience response and fronting a fantastic band.”

Steve will be joined on the tour by regular musicians Roger King (keyboards), Jonas Reingold (bass), Rob Townsend (saxes/flutes) with Nad Sylvan on vocals. Craig Blundell (Steven Wilson, Pendragon) will be on drums & percussion – he was voted by Modern Drummer and Rhythm Magazine readers as one of the top progressive and forward thinking drummers in the world……

Soon, North American fans will get to experience the mighty Genesis Revisited: Seconds Out + More Tour for themselves!