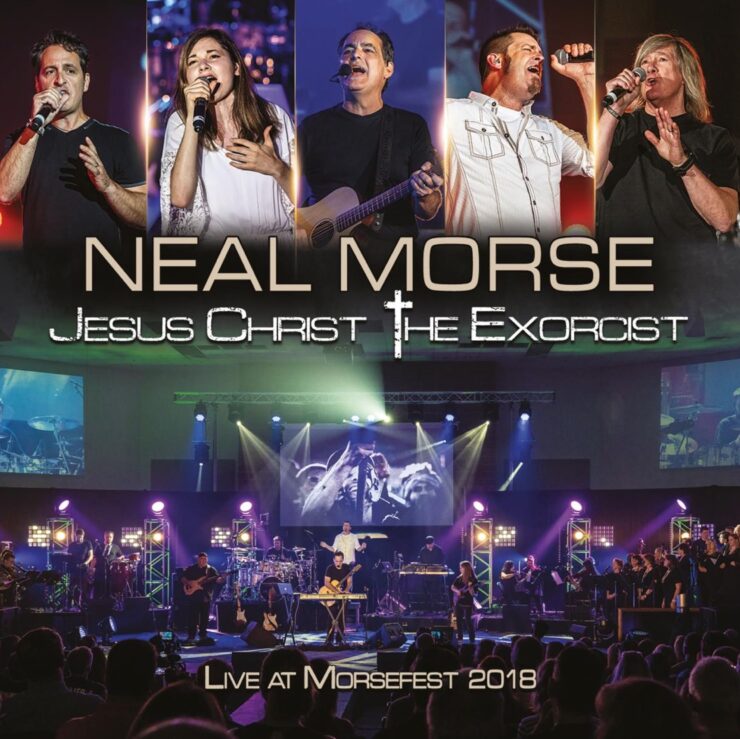 In May 2019, we reviewed the studio album of Neal Morse’s musical, Jesus Christ The Exorcist and that review details the musical highlights of the show for anyone not familiar with it. HERE.

JCTE was premiered at Morsefest 2018 and the long awaited DVD and Blu-ray sets have now been released. Staged as a concert with dramatic elements, with a large cast of singers and musicians, the visual aspect truly brings the performance to life. Part concert (the musicians play on stage and the piece is performed to the audience) part musical (dramatic elements and some costume changes add to the narrative), it’s a mix that works well in the context as the audience respond at the appropriate times and take in the spectacle.

The pacing and style shifts make it an engaging watch. From the overture and the announcement of the arrival of Jesus by Theocracy’s Matt Smith, leading to an entertaining performance by Rick Florian during Jesus’ temptation. This section perhaps illustrates the benefit of the visual medium in conveying the sly, mocking of Satan, as Florian struts on stage, making air guitar moves alongside guitarist Paul Bielatowicz and bass player Randy George. Talon David plays out the “before and after” of Mary Magdalene as the slide guitar blues of the red-dressed “Woman of Seven Devils” becomes the white-dressed follower in “Free At Last.” This part is played with both sass and compassion, showing that these performance are much more than musicians behind a mic stand.

“Madman of the Gadarenes” has to be seen to be believed as the demons torment Mark Pogue, and multipart vocals combine in a staggering performance – far from typical rock gig stuff and … to be honest.. bonus points for Ted Leonard for keeping a straight face! John Schlitt and Nick D’Viriglio feature in the second half, Schlitt shredding it on vocals in a powerful “He Must Go To The Cross”, which has the audience on its feet, while NDV brings one of the emotional high points as the conflicted Judas in “Heart Full of Holes”. Both singers, as with all the cast, hit the perfect balance of performance and drama to their feature.

The final sections of the musical feature Jake Livgren as a memorable Peter, denying Christ when challenged by Servant Girl, Julie Harrison, all leading to Neal Morse’s main performance as Pilate in the emotional scenes that lead to the crucifixion.

If you haven’t realized by this point (and you should!), the final sequence demonstrated how this musical could go head to head with Broadway. Mary visiting the empty tomb, eventually realizing that Jesus is alive, are an extremely powerful conclusion, such that even Ted Leonard lets a little emotion show, demonstrating that this display moved both audience and performers alike. A rousing reprise of Love Has Called My Name has everyone on stage and the crowd on its feet.

(1) the incredible musical performances, with the key musicians, Neal Morse, Randy George, Bill Hubauer and Paul Bielatowicz, and a special mention to the multitalented Eric Gillette on drums, supported by strings, backing singers and choir.

(2) a must-watch making of documentary – Behind The Curtain. I’m a great fan of DVD extras and each Morsefest release raises the bar. The musical comes with its own great story, and itself tells a great story. The bonus feature does an amazing job of giving us not only a behind the scenes glimpse of how it came together, but also goes deeper into what the performance means to those who took part. Don’t miss this one!

Who knows what will happen next with JCTE? It is great to have this debut captured and preserved so pwe can revisit it. In staging this Neal has achieved a great feat, and this presentation is one that even people who wouldn’t be fans of regular prog releases would find extremely enjoyable.

CD2
1. He Must Go To The Cross
2. Jerusalem
3. Hearts Full Of Holes
4. The Last Supper
5. Gethsemane
6. Jesus Before The Council And Peter’s Denial
7. Judas’ Death
8. Jesus Before Pilate And The Crucifixion
9. Mary At The Tomb
10.The Greatest Love Of All
11. Love Has Called My Name (Reprise)
12. Morsefest 2018 End Credits