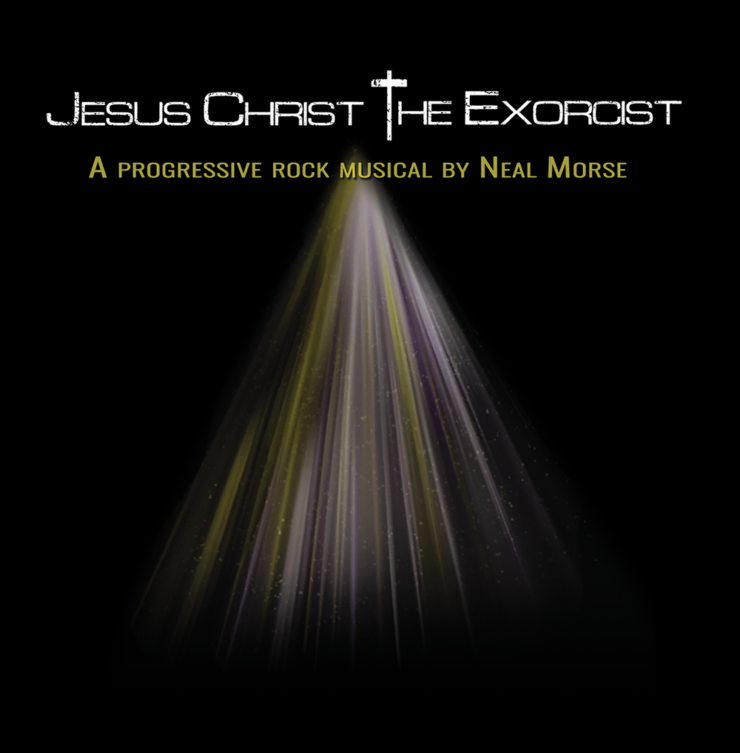 This was how someone once explained it to me: “The measure of a great musical is when you enter the theater not knowing the songs, but leave it singing them!”.

There’s an important point to make in advance… this review is of the album version of a musical. So for the listener, in my opinion, the best way savor this is carve out the time slot, choose your comfy chair, gets treats, schedule a comfort break between discs 1 and 2, turn off your devices and, with the CD/ vinyl booklet in hand, sit back and let it take you on a journey (a 2 hour car drive would be fine too!).

The album is, of course, the work of Neal Morse, who while having a relatively minor vocal role, composed, coordinated and masterminded the entire production. The main characters are portrayed by a range of singers, mixing those familiar to Morsefans (Ted Leonard as Jesus, Nick D’Virgilio as Judas etc) with some who might be less well known, but no less superb.

The story begins with Jesus crucified, asking the Father to forgive those who have put him there, before moving into an overture as befitting of a musical. Anyone who fears that the stage musical form would involve a dumbing down of the forms of music Morse fans enjoy need not – air drummers / conductors, this is one for you to enjoy! While the album’s almost two hours is divided into 25 tracks, the music plays out in acts, like a musical with the songs linked together. If you’ve heard “the singles” you will know there are some more traditional stand alone tracks, while others are more narrative driven, with multiple characters involved.

The lead roles, Jesus and Mary are perfectly cast. Ted Leonard is well known to prog fans and is quite simply superb on this album. Given the nature of the musical, it’s clear that the production approach to the vocals was very key, and with as versatile a vocalist as Ted on board, you can go from the Ozzy-sounding “Get Behind Me Satan” to the tender moments of the closing ballad “The Greatest Love of All” (no, not the Whitney one!). Neal has said Ted was first choice for this role and it’s easy to hear why. Talon David is the opposite in that she is/ was probably unknown to most listeners. She was a relatively late addition to the cast for the Morsefest 2018 performance of the musical, but her moments in the musical are absolute show stoppers. Moving from the sassy “Woman of Seven Devils” to the closing revelation that her Master is alive, she takes us on that full emotional journey with style, confidence and capability beyond her years – when she is inevitably famous, you’ll be able to say: I knew her before that!

The guest cast list is also extremely impressive. Theocracy’s Matt Smith is an early star of the show, from his full-on rock vocals in the heavy section of “Gather The People” to harmonizing with Leonard on “Jesus’ Baptism”. Rick Florian’s air guitar/ dancing almost stole the show at Morsefest, and his vocal nuances in his role as the Devil in “Jesus’ Temptation” are superb, with Neal adding fantastic voice-box guitar. A participant in the original 2008 demos of the musical, Mark Pogue (a stunning guitarist in his own right, who played shows with Neal in the USA) is the tortured “Madman of the Gadarenes”, an unusual track of itself, but a brilliant telling of one of the exorcisms referred to in the title. The signature Morse multipart vocal interplay to represent the multifaceted demons is extremely effective. Many Neal fans are familiar with this style from songs such as “Thoughts” and “Time Changer”. A friend of mine who is a choir director and attended the Morsefest performance commented afterwards: ‘Most people will have no appreciation of how complicated that is to execute, nevermind that you need to be a genius to write it!’.

“Love Has Called My Name” features Neal and long time collaborator, Nick D’Virgilio in his first appearance on the album. This multi-voiced, harmonious sing-along is one song you’ll leave the “theatre” singing, not least because it is reprised by the whole cast at the end of the musical! Along with Talon, the other “secret weapon” on this album is Jake Livgren. Yes, the surname gives him a prog pedigree, but his vocals show that he can cut it in the company of musicians many of who are Jake’s own heroes. His sheer dexterity is highlighted when he reappears a few tracks later in the (different) role of the sneering High Priest Caiaphas on the stomp/clap rock of “He Must Go To The Cross” – his high register gets a thorough work out, and Jake’s performance deserves a standing ovation! NDV’s showcase track as Judas, “Hearts Full of Holes” is one of the songs, and performances, which I listen to and think: people need to hear this. Let’s hope that, with the backing of the Frontiers label, this release is just the start of the journey for this musical.

The drama really kicks in from “Jesus Before The Council” onward as the story unfolds with appearances from virtually all of the characters who have appeared so far, along with Wil Morse and Julie Harrison. “Judas’ Death” and “Jesus Before Pilate” completely conjure up the images of the scenes (and may I also point out the crazy horn-led intro to the latter track- amazing music from the Morse mind!). The concluding ballad “The Greatest Love of All” is a stand out moment and a song that I believe many people would love outside the confines of this musical. Leonard shows his ability to capture the sensitivity of the moment; Talon will tear your heartstrings with her cry of devotion. It’s in no way cheesy or mawkish, but a song that will raise you emotions in the way it did for even the cast members (Ted!) at Morsefest.

What I haven’t mentioned so far is the musical backing. Randy George, Bill Hubauer and, on drums, Eric Gillette are faultless in their performances. With incredible guest guitar solos from Paul Bielatowicz (“Overture”, “There’s a Highway”) and Eric Gillette (“The Crucifixion”), the rest of the lead guitar playing is from Neal Morse, in many cases taken from his original 2008 demos of the musical before its recent re-write. Add in the strings, horns and backing vocalists from Morsefest and you have the full cinematic soundscape this deserves.

In summary, this is a great piece of work, filled with strong cast performances. I believe that by the time you get to the reprise, you will be rising from your seat, applauding, demanding an encore… and singing the songs!

Key Tracks: Get Behind Me Satan, The Madman Of The Gadarenes, Love Has Called My Name