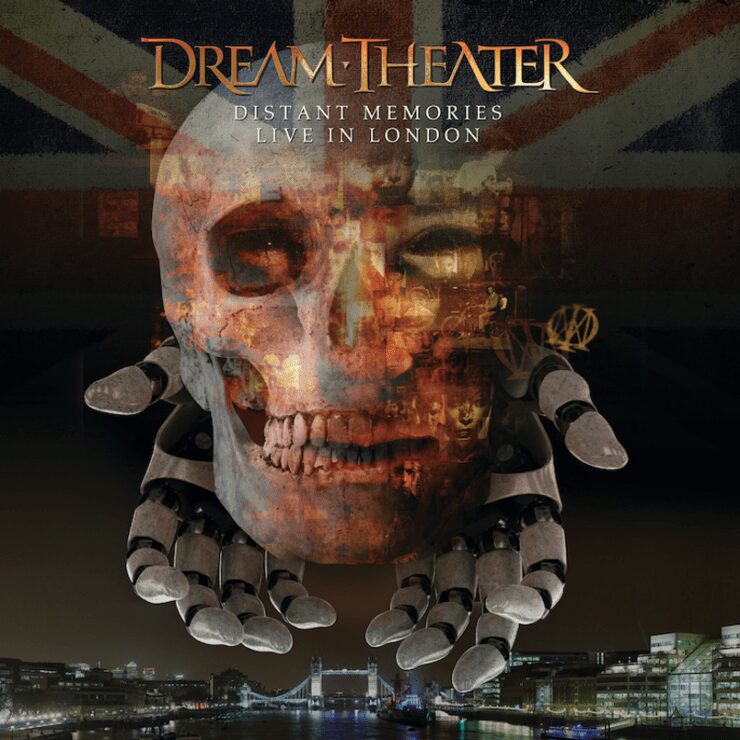 Recorded in the nick of time at the final show, not only of the tour, but also pre-pandemic, this CD/DVD/Blu-ray set captures Dream Theater at an interesting point in their career. 2019’s Distance Over Time had been hailed by many critics and fans as their best since… well since whatever they considered the last great studio album – but this one seemed to attract a level of attention and regard that hadn’t been the case over the last number of albums.

Emboldened by the response, and with a nod to their legacy, the band set out on a world tour in the An Evening With… format: no support band / two sets. As captured here the first set leans very heavily on the new album, more so than perhaps many bands with a 35 year history would. At 6 tracks and around an hour in length, the Distance Over Time songs all stand up very favorably in live performance. “Untethered Angel” shows that a great album opener easily translates into a great show opener, while “Barstool Warrior” has acquired perhaps some enhanced dynamics since the recorded version – the slightly more laid back groove of the verses is a great set up for the chorus, and John Petrucci’s solo in the middle section shows why he’s the upper echelon of prog guitarists as he shifts between a variety of styles and tones. The new tracks are joined by some older ones which compliment them well. Black Clouds …‘s “A Nightmare To Remember” is a dark masterpiece, contrasted by its uplifting chorus section, while “In The Presence of My Enemies Part 1”, further establishes that a large part of the opening set has been made up of DT album openers.

Then comes the second half of the show: the iconic ‘Scenes From A Memory’ album played in full for the first time in many years. For many fans, SFAM was their way into the band, and is held in very high regard. From an audio perspective the closest comparison I could make would be the 1994 version of Dark Side of the Moon on Pink Floyd’s Pulse live album/ DVD: it’s extremely well played and executed, with amazing visuals and staging, captured in the video elements – but the sheen of the modern version means it perhaps loses the rawness and edge of the original live performances. I absolutely can’t fault this version but time will tell whether I return to listen to the audio. The win for me in relation to SFAM is the video. Technology has advanced to such an extent that in the 20 years since the original tour, hi def screens and animation can bring the story to life. It’s a complicated tale and visually this version achieves something quite exceptional – and it is brilliantly captured, with a balance between the narrative footage and seeing the band in action.

There’s no doubt that in this video you’re hearing master musicians at work, with Petrucci, Myung, Rudess and Mangini each getting their spotlight moments, and James LaBrie uses all his best frontman abilities to great effect. In a year where live performances of this sort are not possible, it’s wonderful to have this one captured to remind us of what we’re missing.