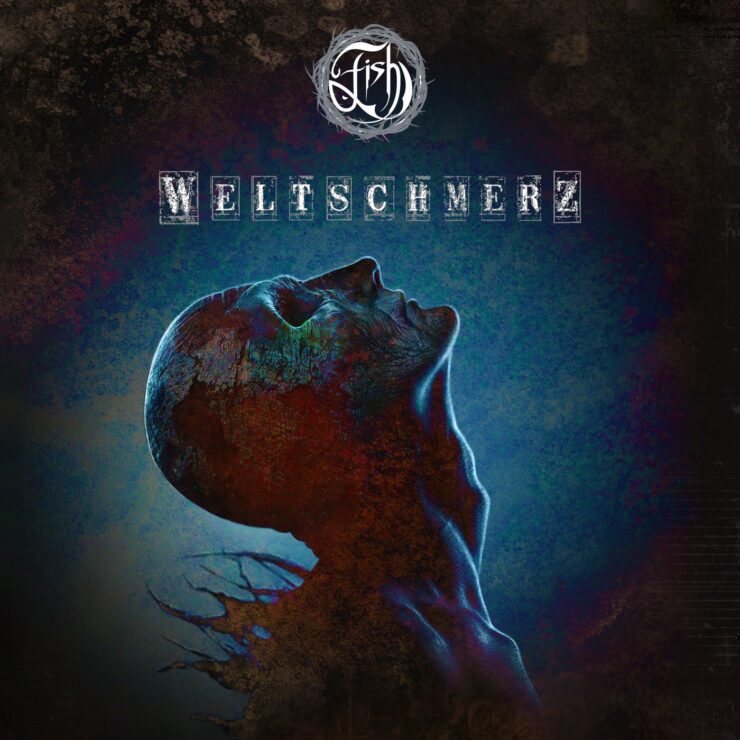 Review of the Fish album ‘Weltschmerz’.

Careers of rock stars end in many ways… someone once said: “Some of us go down in a blaze of obscurity. Some of us go down in a haze of publicity”. The author of that lyric, Derek Dick, aka Fish, has been on a path to “end well”, after an incredible career in music that spans more than 40 years. However a variety of circumstances- illness, bereavement, band changes, nevermind a global pandemic – have meant that the path has not been as straight or as smooth as he had anticipated.

A key element in this exit strategy was the creation of a final album – an opportunity for one more comment… a last word… an epitaph or perhaps a eulogy for his musical career. Describing himself as a writer who also sings, Fish is not known for hiding his true thoughts or feelings, but nevertheless the finality of this album meant he had a sharp focus on what he wants and needs to say. Farewell speeches don’t always make good art, so how does Weltschermz stack up?

Weltscmerz is crafted as an “old style” double album – two discs of approximately 42/43 minutes long, complete with complimentary artwork and lyrics (yes you can stream it too, but beware of missing out!). The title is a German word that means “world weariness” and, while it’s not a concept album in the narrative sense, this underlying theme, and Fish’s reflections on those aspects are the conceptual thread that runs through it. That might raise the question – is this a dark and depressing listen? In my opinion, the answer is that isn’t the case. It’s not an album of minor key moaning, but rather uses reality to find some elements of light in the darkness. For example, Walking on Eggshells, in which the subject is the challenging side of relationships (and by Fish’s own admission, draws from his personal experiences), has a joyful mid-section that combines 12-string guitar, swelling strings, a very proggy Moog lick, with the “she’s always there for you” refrain, bringing the underlying hope.

In the video interview on the deluxe set, Fish mentions that he didn’t shy away from prog elements, because they reflect a large part of his influences. For musical collaborators, Fish continues his partnership with Steve Vantsis as wingman, complemented with contributions from familiar friends, Robin Boult, Fos Patterson and John Mitchell, each of whom bring their own traits to the overall album.

The album has many delights to explore that a review couldn’t do justice to. If you’re after epics, there are two phenomenal story songs in Rose of Damascus and Waverley Steps. If you want to get personal, This Party’s Over is Fish calling himself out to deal with the issues he is facing , while The Prog Report Song of the Year winner, Garden of Remembrance will resonate with anyone who has lost a loved one to Alzheimer’s/ dementia. The opening The Grace of God has a rhythm inspired by the pulse and noise of the MRI scanner that Fish was subjected to, while closer Weltschmerz has the singer leading the charge to:

A special mention must be given to the format of choice for this release – the Deluxe version which adds a blu-ray with 5.1 mix, a making of video, videos for 4 of the songs and some live versions. It also includes an interview with Mark Wilkinson whose artwork accompanied the start and the end of Fish’s recorded career. The accompanying booklet contains 100 pages of his artwork, as well as lyrics and 8000 words of sleeve notes by Fish. Believe me – this isn’t a flick through / watch once package – it’s one you’ll reach for again and again!

“I’m a grey bearded warrior, a poet of no mean acclaim
My words are my weapons that I proffer with disdain”

If this truly is the end for the grey bearded warrior (and I’ve no reason to doubt that!), then it would be fitting to end with a good album. However this album is quite simply one of the best of his entire career – the music, lyrics, production and packaging are all absolutely first class. It seems appropriate that the peace sign-waving Market Square Hero leaves the stage with an album that stands head and shoulders with anything else in his career.