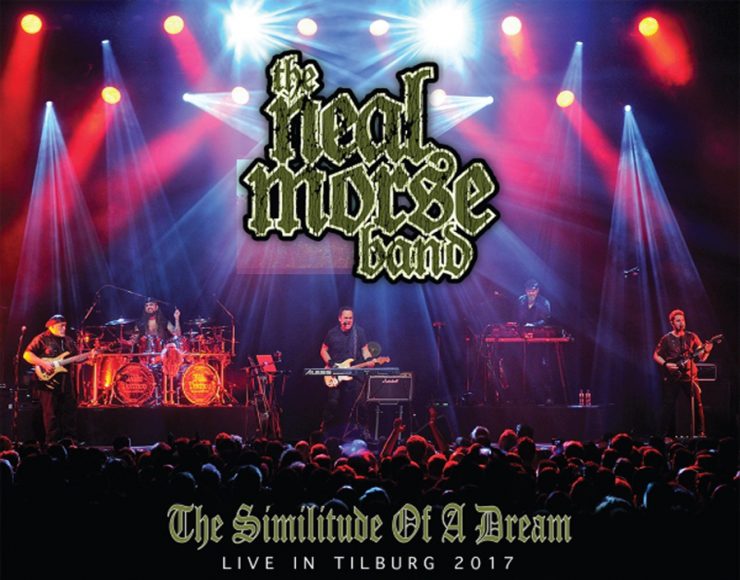 Review of the Neal Morse Band – The Similitude of a Dream Live in Tilburg 2017.

The Neal Morse Band spent much of 2017 touring the world, performing their epic album The Similitude of a Dream. Now, finally comes the first official live recording of this momentous live spectacle, in fantastic 2CD/DVD or Blu-Ray sets. I was able to attend three of the UK shows of The Road Called Home tour. Apart from simply being a brilliant show, I had the luxury of viewing the show on 3 consecutive nights from 3 different positions: the back of the hall (Glasgow), the front row (on that famous day ‘not by the sea’, that would inspire the song “Manchester”) and a balcony above the stage, being able to see overhead into the drum kit (London). Some people may think it crazy to see “the same gig”, on 3 consecutive nights, especially given that the main part of the set list was a two hour concept album played in the same order. Wouldn’t it become redundant and stale? Well, no, on the contrary – and that was definitely helped by the fact that back, front and above, gave me a totally different experience each time.

What is great about this new live set is that the full experience I needed three nights to capture is all covered here in this excellent set. Of course, the risk of anything being filmed is that the band’s performance is somehow affected by the presence of the camera… not so here. Tilburg is not only a renowned prog venue, but a “go-to” spot for bands filming a show. The beauty of this one is that while the 013 has a character all of its own, the show is an absolute memory jogger for those 3 UK shows and captures all of the highlights in the best light.

I won’t spend a lot of time explaining TSOAD – my guess is if you are reading this you already have a fair idea – but what I will say is that the story came most fully alive during the live performances. For the first time that I have ever seen Neal, and his band, indulged in some (light!) costume decisions, made use of some props, and in Neal’s case, several masks (A Flower? No – a sloth!). Conscious that there was a 2 hour story to tell here, those illustrations brought small amounts of detail and drama to what is already conveyed in the music and lyrics. The torch-lit, “Long Day” leads into the high energy overture, where we get a sneak peak at many of the key musical themes in the album.

At the time of the album release many commented on, perhaps more so than The Grand Experiment, the NMB band members enjoying a bit more prominence, including Bill and Eric singing key songs in the concept album, as well as bringing their musical influence. Take a song like “Makes No Sense”… in the context of the story, it’s not one that makes significant narrative advances, compared to others. Where this track shines is with key changes that bring us sections from Eric and then Bill, with the key, and voices, getting higher. The filming captures this so well, and you can see the joy on the band members faces as the song proceeds. Having done some American and earlier European dates, the band is fully in its stride, taking the material to a new level and even, at times, adding to arrangements slightly. “The Ways of a Fool” got a great reaction in all of the shows I attended, and that’s also the case here, with the filming recapturing the front row singalong feeling for that song perfectly. Contrast that with the, initially, dark and dramatic “Breathe of Angels” which builds towards the incredible climax, which features one of a few variations from the album where Eric Gillette takes lead on some of the vocal parts – the “river’s overrun…” section here is extremely effective.

The aforementioned guitarist also takes charge of the audio mix for this show and in doing so gives us not only a faithful playback of the show, but uncovers depth in the vocals and instrument layering which weren’t so noticeable in the concert hall. Great job, Mr. Gillette!

And you would think that after a 2 hour set, a quick encore and that would be enough? No! This is prog and so there’s another 35 minutes of music and 4 songs to go! The version of “Momentum”, with an added middle section which appeared on the demo, is a nice addition followed by “Author of Confusion” and (the shortest NMB song ever?) “Agenda”! The grand finale of “The Call” brings the show to a close and it’s great to see the delight (rather than exhaustion) on the faces of the band and the Tilburg crowd.

Of course, this is not the Morsefest 2017 performance of The Similitude of a Dream album, which was also recorded last year and included a choir, instrumentalists and dancers (oh and a new sloth mask!). It can reasonably be expected that it will be released as well. Perhaps there was an expectation for that to be released sooner, but what I can say, having experienced this live set, is that it’s an essential addition to the catalogue, and one I will return to many times, to recreate the memories of those shows.