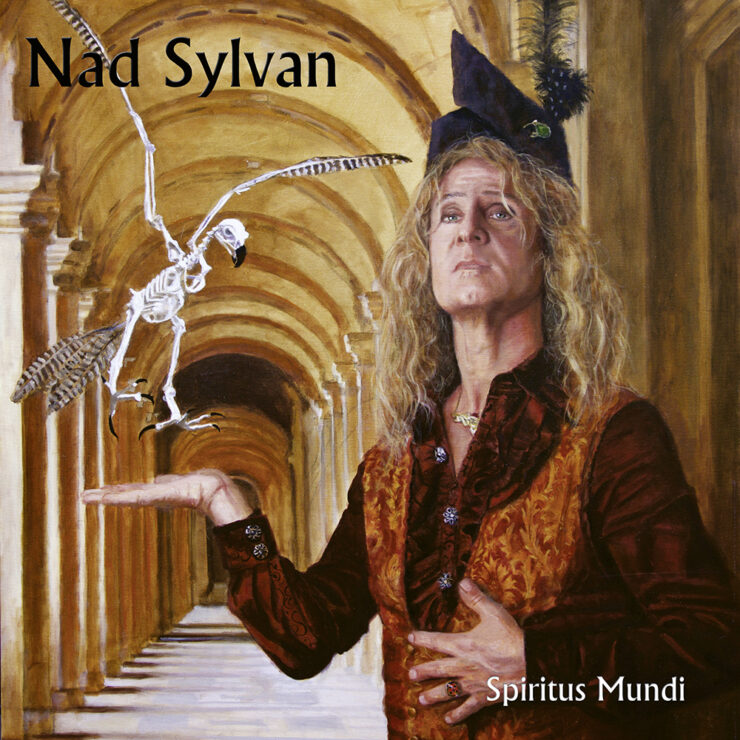 It would seem I was the obvious choice to review Spiritus Mundi, the new album by Nad Sylvan… I’ve been an avid follower of his career since he joined The Agents of Mercy with Roine Stolt, eventually worked with Steve Hackett and has recorded a series of fantastic solo albums… but it’s not just that! Sylvan’s latest album is filled with musical interpretations of the poetry of William Butler Yeats, possibly the foremost Irish literary figure of the 20th century – being Irish, that would make me the logical choice right? However, don’t think for a moment that this album is some sort of folk rock workout. Yeat’s use of allusion and symbolism mean his words make absolutely great lyrics, and particularly suit this genre!

The album stems from Nad’s collaboration with songwriter Andrew Laitres, and their first collaboration which was a bonus track on Sylvan’s last album The Regal Bastard called “The Lake Isle of Innisfree,” also based on words by Yeats. So really a full album in a similar vein was the logical next step.

Stylistically, it’s is a step forward from some of the more traditional prog stylings of his trilogy of solo albums, taking a more orchestrated/ melodic approach, and making use of Laitres’ voice to support and supplement the familiar Sylvan tones. That said, the music is no less inventive and adds depths with repeated listening and exploring. The orchestral opening of “The Second Coming,” is supplemented by a distorted voice reciting Yeats’ words, before the track strips to a strummed acoustic guitar, accompanying the familiar Sylvan tones. With Sylvan and Laitres covering many of the instruments, occasional guest spots from familiar names such as Tony Levin, Jonas Reingold and Steve Hackett add different colors, along with The Flower Kings’ Mirkko De Malo joining on drums.

Fans of Sylvan won’t need to be told how versatile and full of feeling his vocals are. If you take a track like “Sailing to Byzantium,” Yeats’ paean to an old man’s metaphorical journey towards his own vision of paradise, the shifts and twists in the vocal and melodic styles take you on the journey in a way that absolutely complements the lyrical themes, without playing safe. It’s a great balance of interesting music and lyrics with depths of meaning. The album has some wonderful overblown moments, nicely offset by more voice/ acoustic focused tracks such as “Cap and Bells” and “The Realists.”

When you listen to “The Stolen Child,” you could be forgiven for thinking that the lyrics, that tell the story of a child lured away by faeries, are a homage to songs like “The Fountain of Salmacis” or “The Musical Box.” This track is a great example of how the words lend themselves to the format, moving as they do with the cadence of a ballad, complete with a chorus like refrain. “To An Isle In The Water” is a poem which has been covered by various folk acts already – but not like this! This song has a fantastic vocal soundscape, built on a bed of acoustic guitars and vibes.

“The Hawk” moves from the more acoustic tracks to a more uptempo song, which allows Sylvan to emote at the top of his range, as the backing track paints the picture of the bird of the title soaring through the sky. The closing song “The Fisherman” is a triumphant ending, and possibly my favorite track on the album. Yeat’s portrait of the ideal man, doesn’t hide the flawed edges that we all have. A very effective middle section sung by Andrew Laitres serves as an effective contrast on this track and throughout.

For those with the CD (which also comes free with the record) there are 2 bonus tracks to uncover at the end of the album. “You’ve Got To Find A Way” was written by Sylvan, and isn’t a Yeats lyric. It’s a positive and upbeat anthem, encouraging the listener to follow their path. In these unusual times, it’s an uplifting track, with a nice rhythm section groove. The final bonus cut, “To A Child Dancing In The Wind,” is a beautiful pastoral piece with Nad’s “boss”, Steve Hackett, on 12 string guitar. Once again, this track features the complementary vocal styles of Sylvan and Laitres, interacting in a Gabriel/ Collins style, with Nad’s baritone offset by a mid section focused on Andrew’s higher tones.

In a recent podcast, Nad told us that his friend Roine Stolt declared the album Nad’s career best. With no disrespect to what came before, I would absolutely agree with that. It’s filled with great songs and arrangements, intriguing lyrics and is quite simply a showcase for his voice – the meticulous attention to detail that Nad has paid to ensuring the material here is conveyed in the best possible light has really paid off. My feeling is that this is an album that I will keep coming back to this year, and will no doubt be revisiting when the end of year best of lists are being drawn up.

Released on April 9th, 2021 on InsideOutMusic

Key Tracks: Sailing to Byzantium, The Hawk, The Fisherman