Morsefest 2019 – From The Storm to The Great Adventure 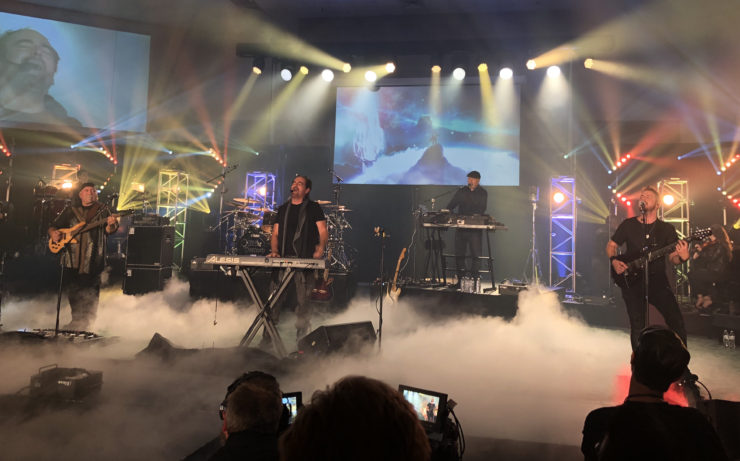 There are things one can expect living in the US each summer. One of those is hurricanes and another is turning out to be Morsefest, the weekend prog festival put on by Neal Morse in his hometown of Cross Plains, just outside of Nashville. Many are by now familiar with the weekend-long event, which started in 2014, with performances of Neal Morse solo albums Testimony and One. In 2015, it was the ‘?’ album and Sola Scriptura.  Then there was the epic Spock’s Beard performance of Snow in 2016 and then a return to Neal Morse albums with Testimony 2 and The Similtude of a Dream.  Last year, there was the premiere of the prog rock musical Jesus Christ the Exorcist, with the huge cast that included Ted Leonard, Nick D’Virgilio, and dozens more.  This year, the event took a huge step forward with the inclusion of supergroup Flying Colors who would be performing a full show together for the first time in 5 years.  There was also the addition of the Steve Morse Band and Randy McStine as opening acts or the 2 nights.  This was expected to be the biggest Morsefest yet, and indeed it was. 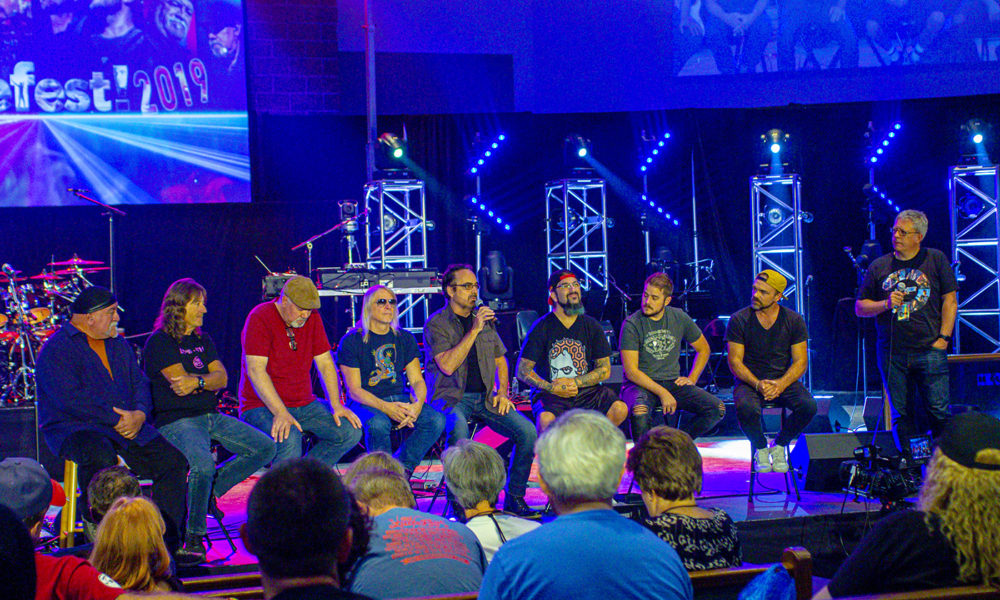 Just as travelers were heading to Morsefest from all corners of the globe, some of us from Florida were dealing with the threat of Hurricane Dorian. With the hopes the storm would somehow avoid Florida, we faithfully made our way to Morsefest. As someone who has attended all but the first one, this has become an event that you don’t want to miss. Each year there new surprises, incredible performances, and many opportunities to get close to some of the best musicians on the planet. There are also the friendships made from previous Morsefests that make the weekend all the much more enjoyable. As with previous years, there are the VIP packages that allow fans to have a 2 hour meet and greet session unlike any you will get with another band. This year there was a group photo, signing session, and Q&A with both the Neal Morse Band and Flying Colors members, expertly moderated by The Prog Report’s Geoff Bailie (who also handles merch). Because of the high demand, there were 3 separate VIP sessions. All the musicians gave plenty of time to each fan and really made the VIP sessions worth every penny. Oh, and there was a dinner thrown in as well. 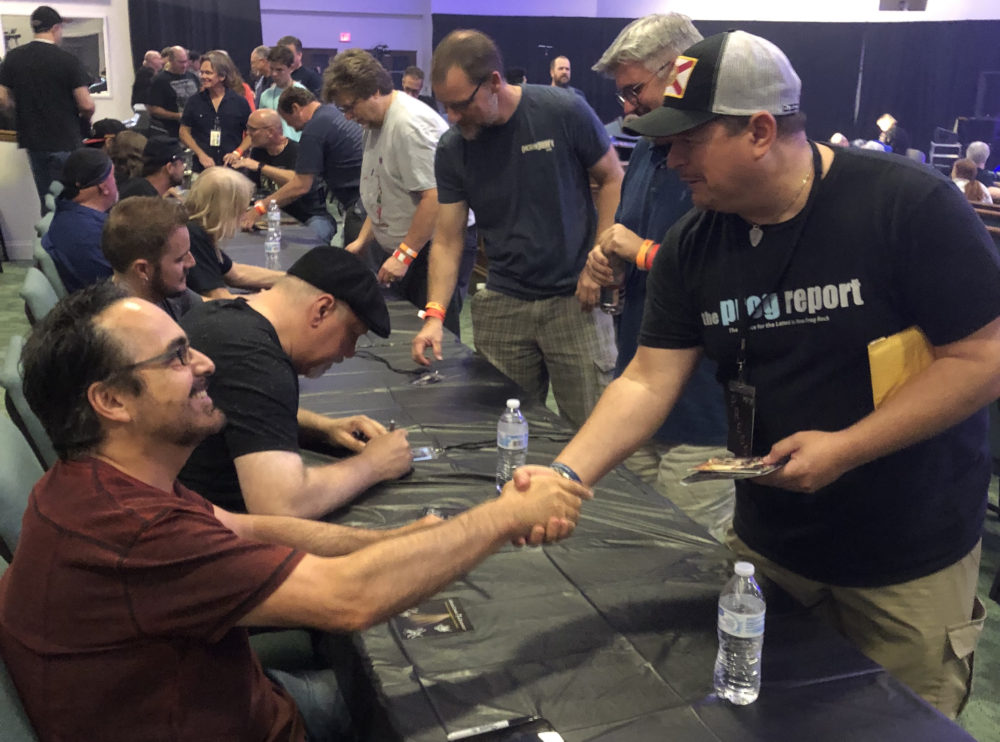 Friday night was to feature Flying Colors and Randy McStine. As the time got closer to open the doors, it became apparent that the turnout was perhaps more than was expected. The line was wrapped around the building and it took a while to get everybody in. There was not an empty seat in the place and the atmosphere was absolutely electric. Randy McStine took the stage and delivered a powerful acoustic solo performance consisting of new material, some of which he had just written. He spoke at length about how he came to his recent decision to pursue a solo career before concluding with one more song. His use of sound effects supported his powerful voice and skilled guitar playing. He was a brilliant choice to get things started. 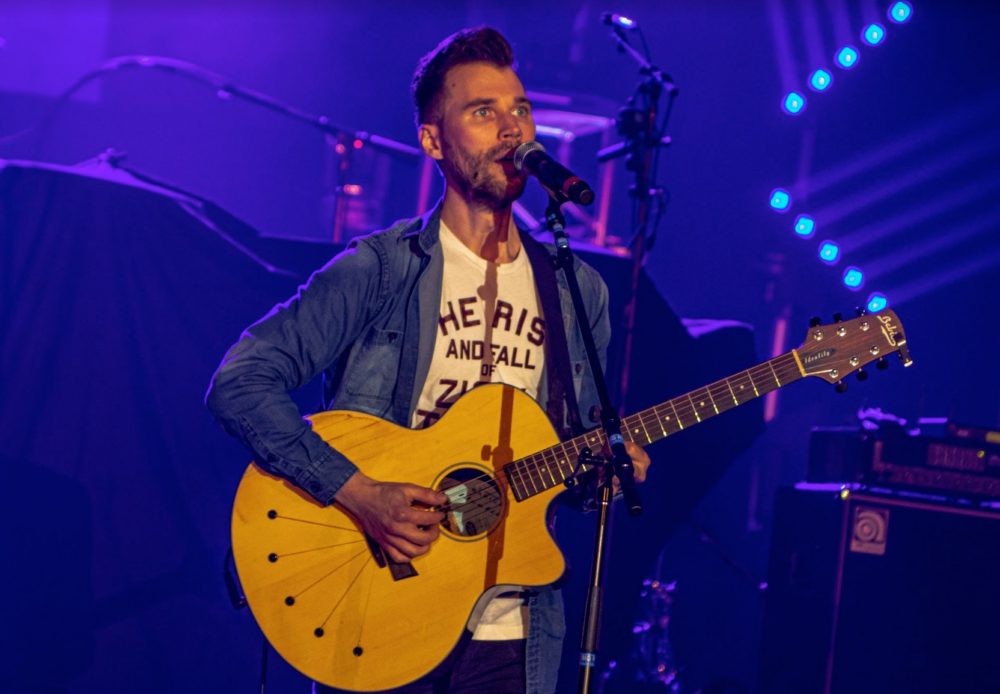 Flying Colors took the stage shortly after with Casey McPherson flanked by Steve Morse and Dave LaRue with Neal Morse and Mike Portnoy in the back. The group kicked of the set with “Blue Ocean” the opening track from their debut album. Their producer from the first album Peter Collins could be seen watching from the side of the stage. “A Place In Your World” from the Second Nature album came next and saw both Neal Morse and Mike Portnoy take turns singing lead. The band then brought on the string section and mini-choir to perform the first single “More” from their upcoming album Third Degree. They also performed the new single “You Are Not Alone” with powerful footage of Casey McPherson and his efforts in helping people during Hurricane Harvey in 2017. It really drove home the message of the song. There was a mix of tracks from the first 2 albums before the group premiered the epic song “Crawl” from the new album, which had yet to be heard by anyone in attendance. McPherson led the audience in crowd participation during the emotional “Peaceful Harbor” before concluding the set with “Infinite Fire”. Seeing the two Morse’s along with Portnoy and LaRue is a captivating experience and their chemistry is obvious even after not playing together for so long. The encore featured perhaps the highlight of the set in the grand closer from Second Nature, “Cosmic Symphony”, followed by the fitting single “The Storm” and finally “Mask Machine”. All in all, it was an incredible performance by a band that has played only briefly since their last full performance 5 years ago. 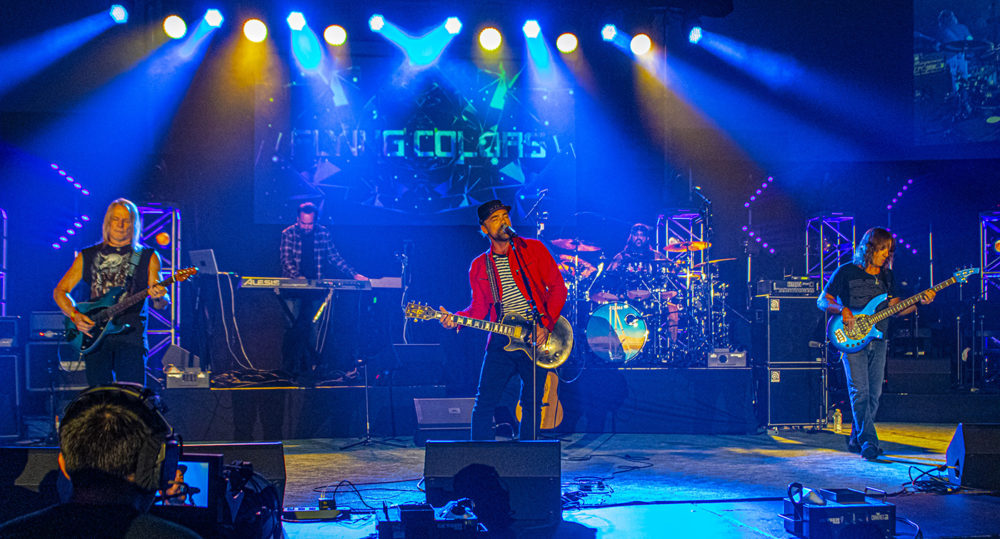 Throughout the weekend there was the constant reminder about the hurricane inching its way to South Florida and it looked like we might have to leave early. Luckily, by Saturday morning it looked like we might be able to stay for that night’s show. The day began with a show for Neal Morse fan club members of Inner Circle. This has been a part of Morsefest from the beginning and is another reason people keep coming back. It’s not like Neal doesn’t have enough to do during the weekend. But the joy and tears he openly shares during these shows in particular show just how much he cherishes the relationship he has with his fans. The hour-long set titled “A Year in the Life” was made up of largely new songs he had written over the last year which were related to various events from his kids weddings to the passing of his mother-in-law. Bill Hubauer and Randy George and drummer Nathan Martin were on stage as well as some a few guest vocalists, Wil Morse, Claire Saint, and Julie Harrison. 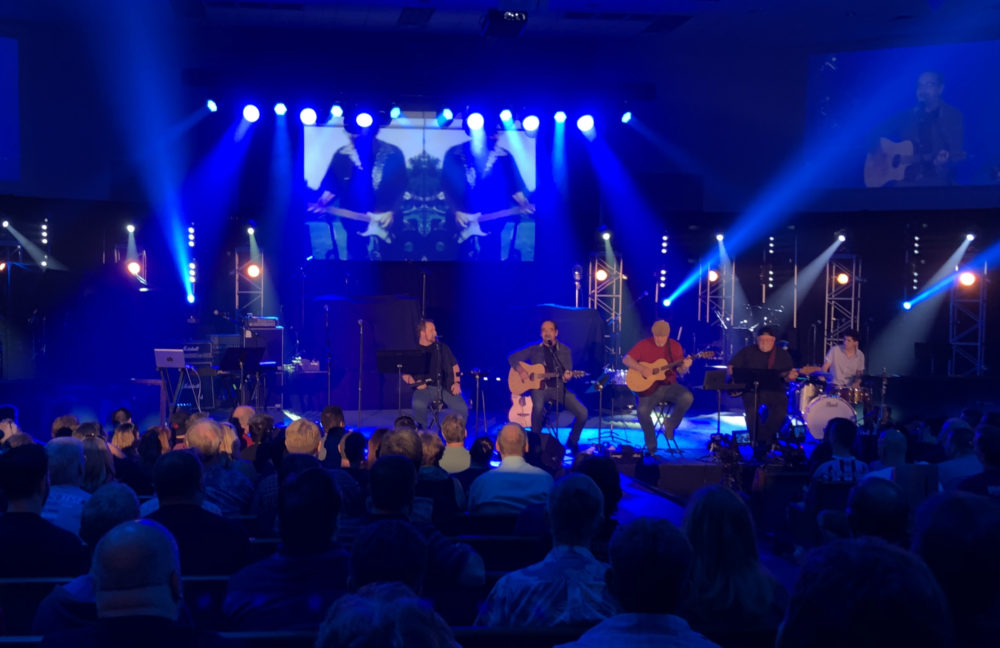 Following 2 VIP sessions in the afternoon, the next evening of shows was to begin with the Steve Morse Band, who were a recent but welcomed addition to the weekend. One of the world’s legendary guitarists, joined by his Flying Colors partner and monster bassist Dave LaRue, and drummer Van Romaine, delivered a brief, but explosive 6 song set, their first together in 7 years. The set included 5 songs from the Steve Morse Band with the closer “Cruise Control” from his group Dixie Dregs. Steve Morse casually joked that he had to play a song that Neal requested because the event was named after him. So, Bill Hubauer was brought on to help perform the exquisite ballad “Long Lost”, as Neal Morse watched from the side of the stage. The song had never been played live by the trio before. For fans of Steve Morse, there was no better way to get the night off and running. 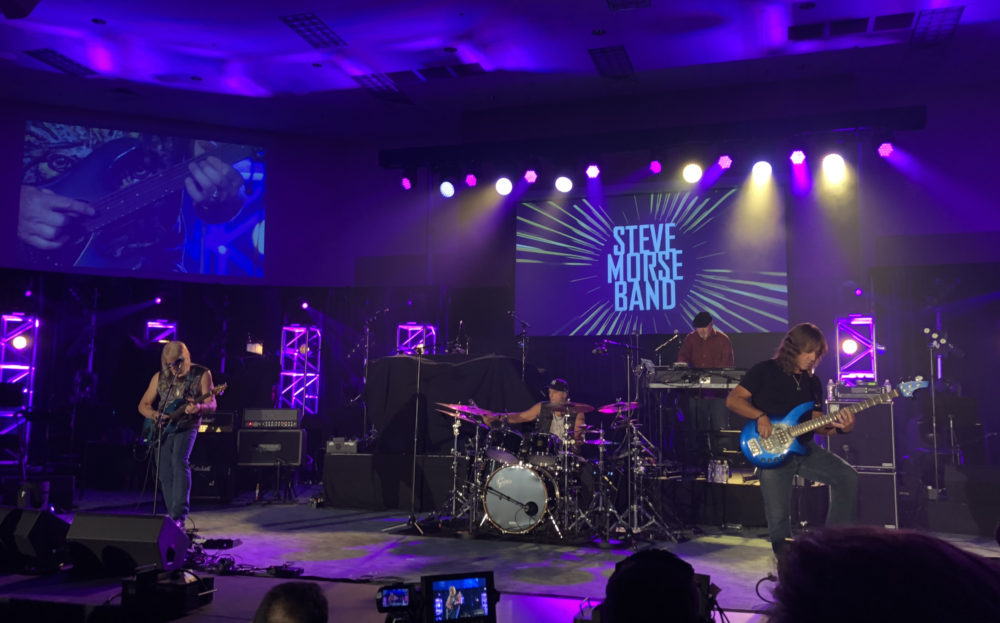 Then came the main event, the final full performance of the album The Great Adventure by the Neal Morse Band, this time with the full Morsefest treatment of strings and horn sections and a chorus of backup singers. In the years since first seeing this band, it has become truly amazing to see what a well-oiled machine this group now is. The performances are nearly flawless, the transitions synched with perfection, and each member shines at just the right moment. It is really a band in the truest sense of the word. The group ran through the first set with “Welcome to the World”, “I Got to Run” and the title track all sounding stupendous. It must be noted that the sound and visuals run by Rich Mouser and Christian Rios, respectively, are as top notch as you will see at any arena show and added greatly to the weekends performances. 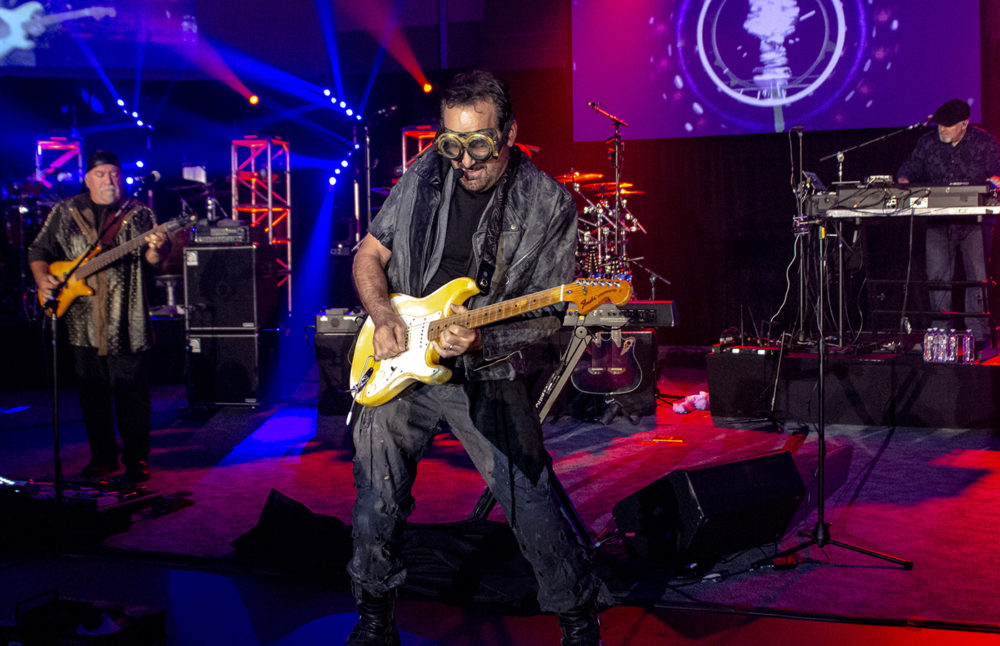 A brief intermission was followed by the second set where the album really has some powerful moments. There is Neal’s comedic costume change for “Vanity Fair” along with Randy George’s pantical prose, the metal moment where Portnoy takes lead vocals “Welcome to the World 2”, and bombastic “The Great Despair” led by Eric Gillette. Bill Hubauer leads the albums most technically impressive track “Freedom Calling” as things lead to the ultimate ending “The Love That Never Dies” with the strings and choir adding the finishing touches to an already epic conclusion. And just when you think that’s all they can offer, there is more and in the most fantastic way. 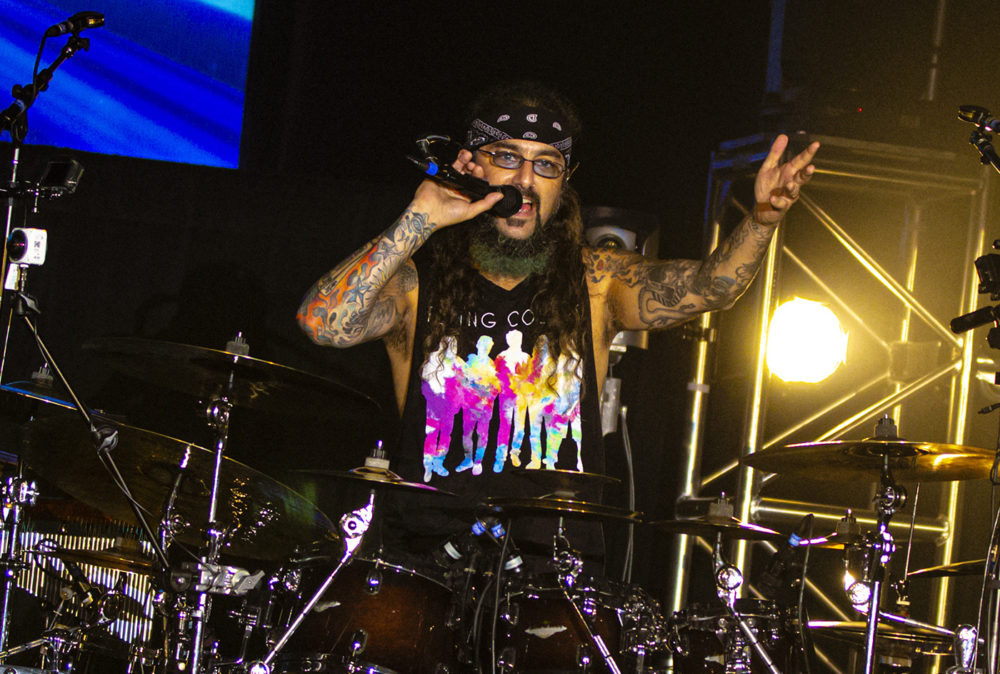 For those that had seen the band on tour this past year, the encore will not come as a surprise as it was the medley of tracks from Neal’s solo career and the Neal Morse Band ending with the most epic of all endings, “Broken Sky/Long Day” from The Similitude of a Dream. It is a fitting end to an incredible concert, covering some of the greatest compositions by this brilliant group of musicians. By this point in the show the audience and the band are noticeably emotionally drained, but it is totally worth it. It had been a long day indeed, but an unforgettable one. 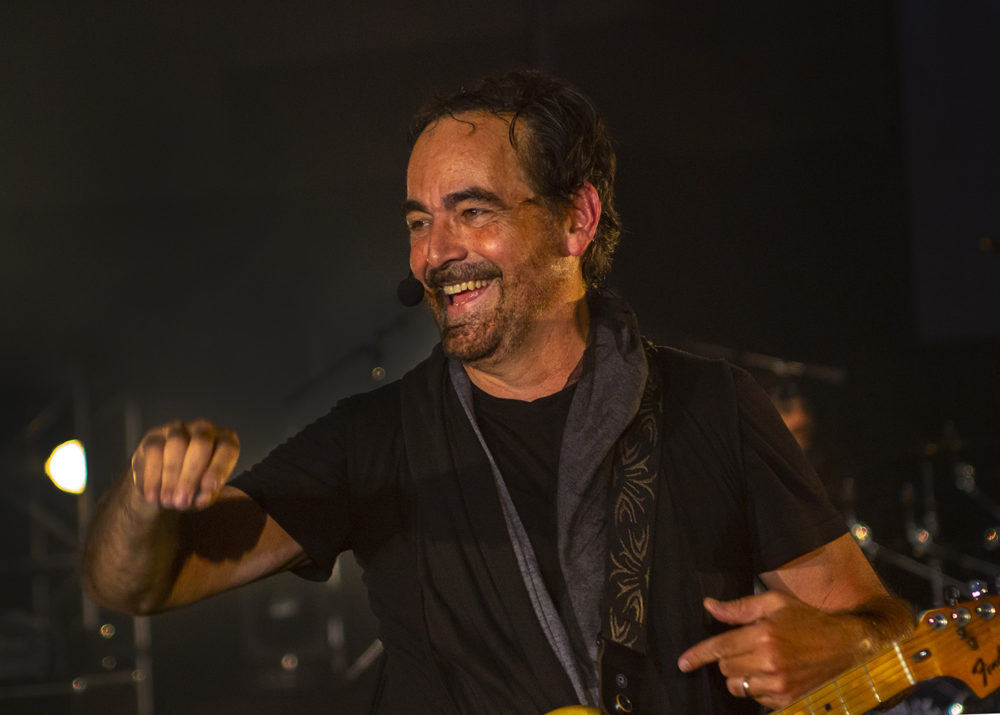 It is written every year with one of these reviews, but Morsefest is unlike any other experience. The weekend put together by Neal along with Joey and Amy Pippin of Radiant Records is extremely well-run, with nothing left to chance. From the merch, to the coffee and donuts and at Inner Circle, to the VIP sessions, the dinner and more, they and their team do an incredible job. Luckily, the storm did not ruin our plans. As we left this great adventure, we could only think about coming back next year. By the looks of it there indeed will be a Morsefest 2020 and it is expected to be bigger once again, so make your plans now! 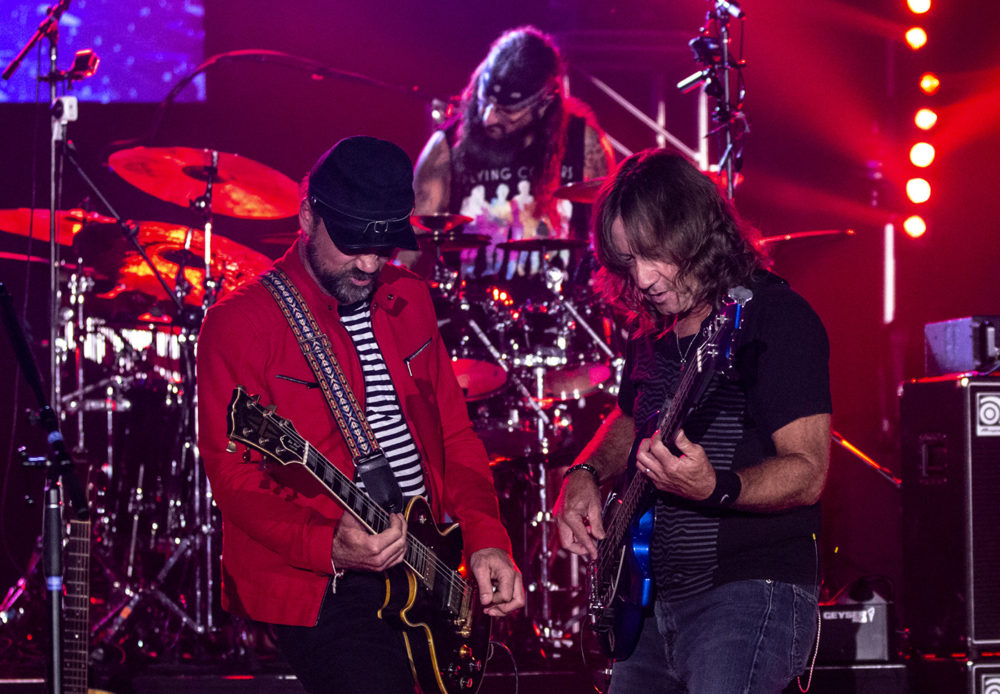 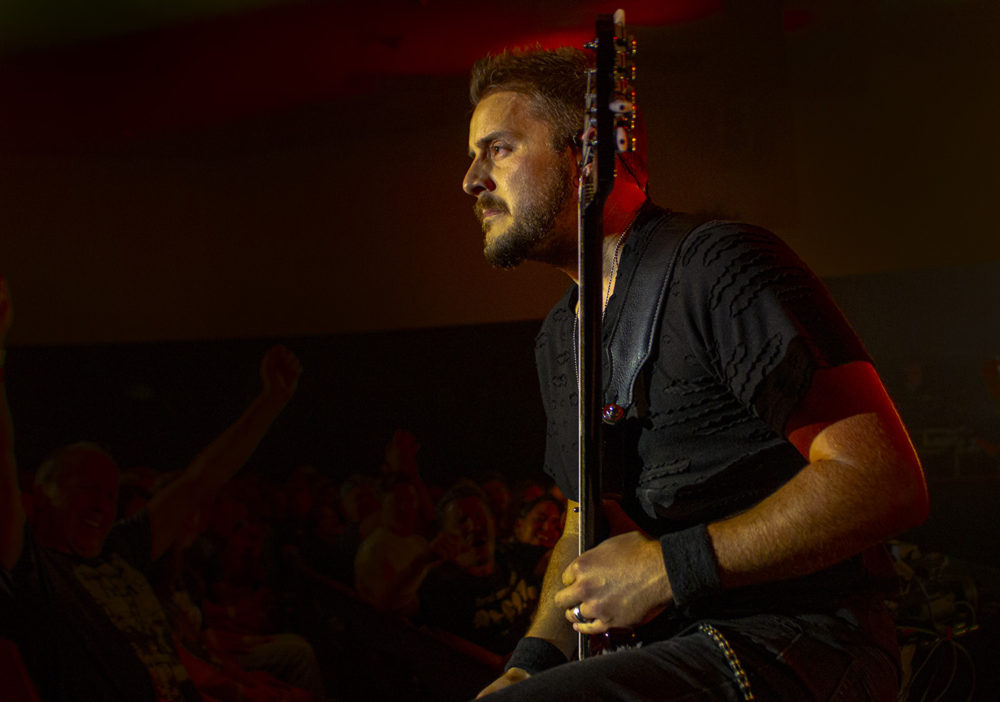 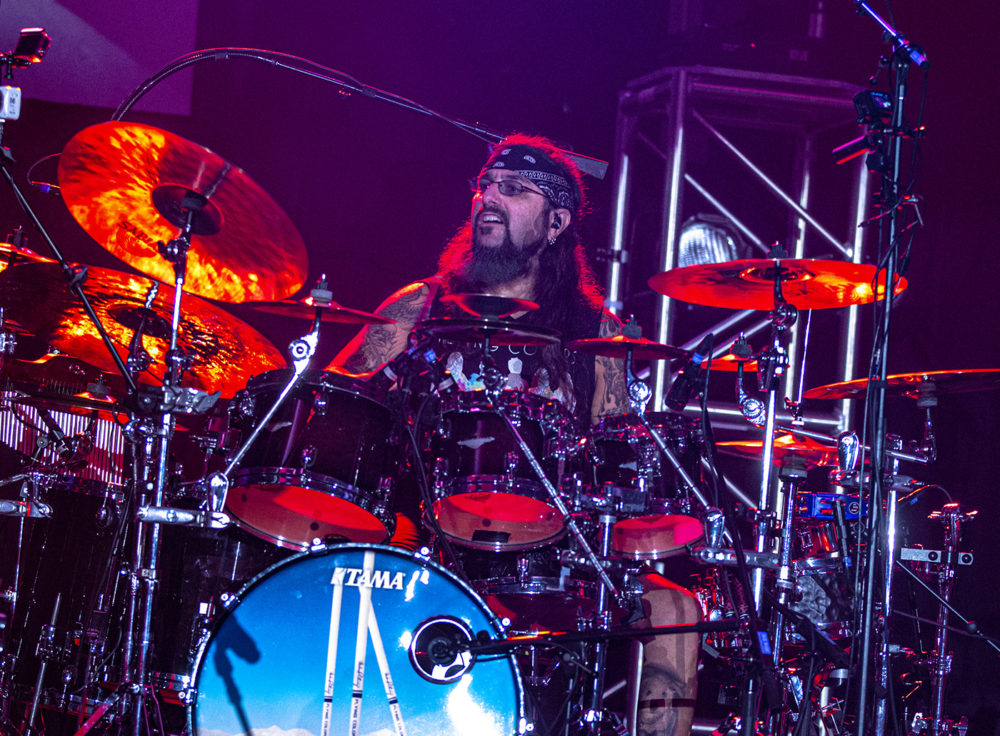 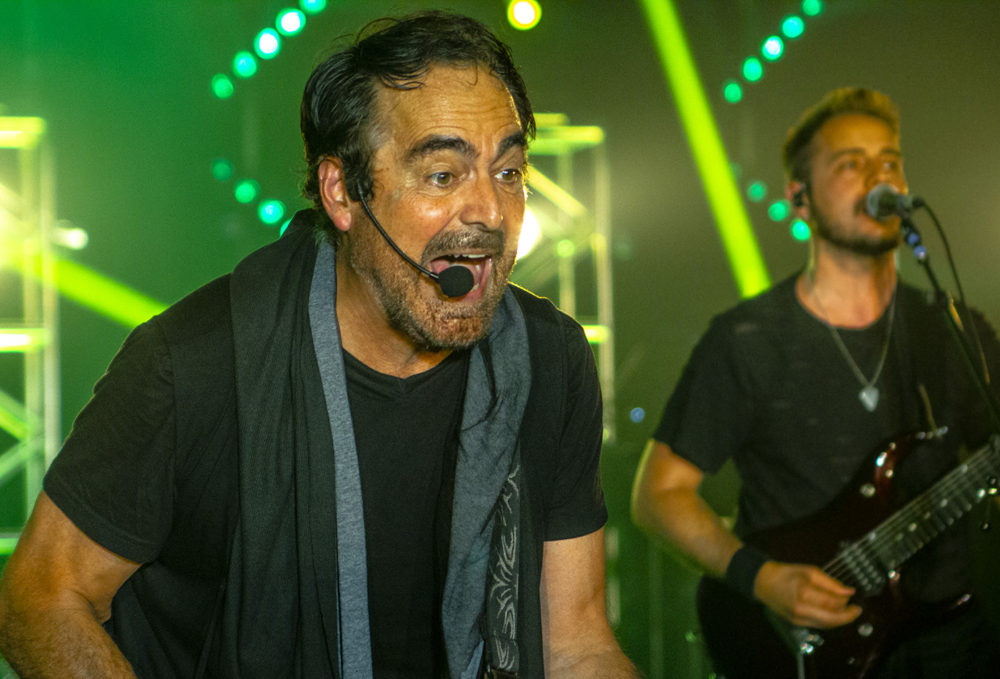 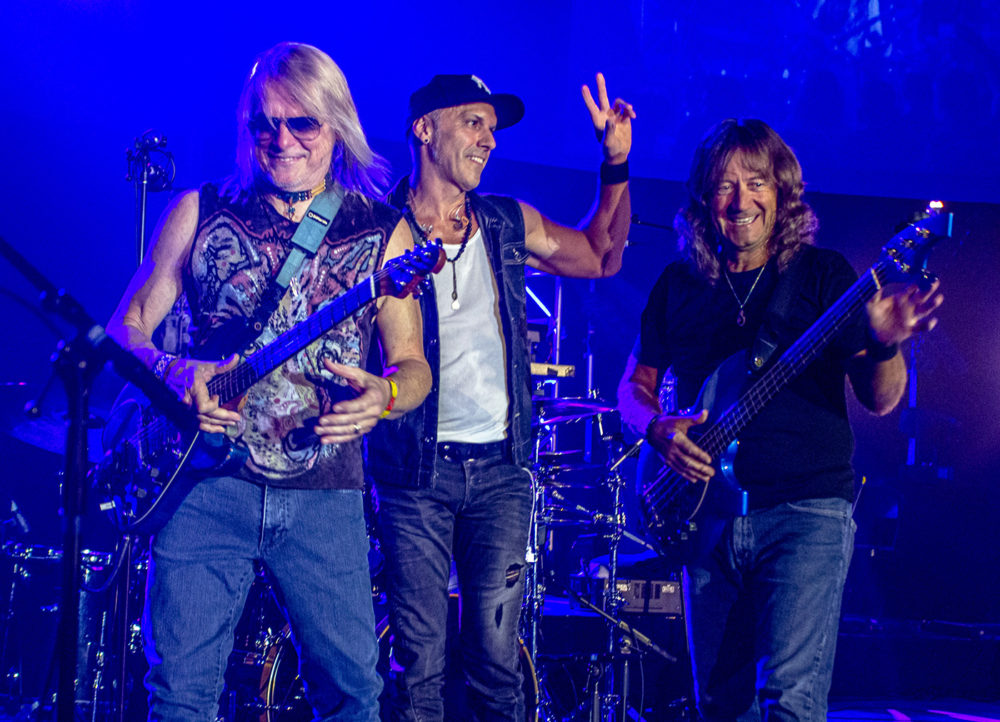 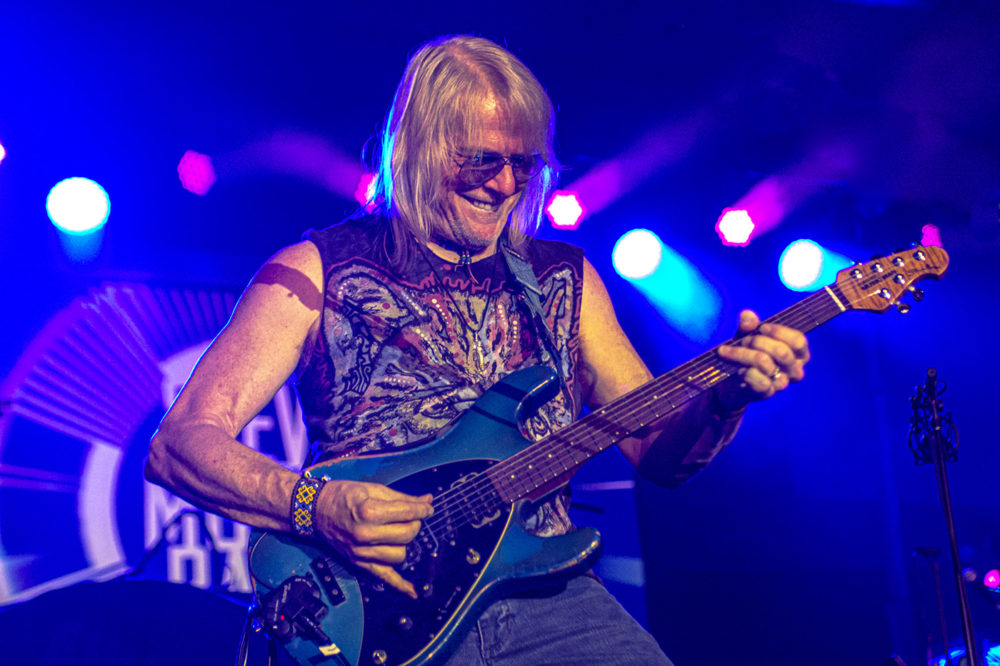