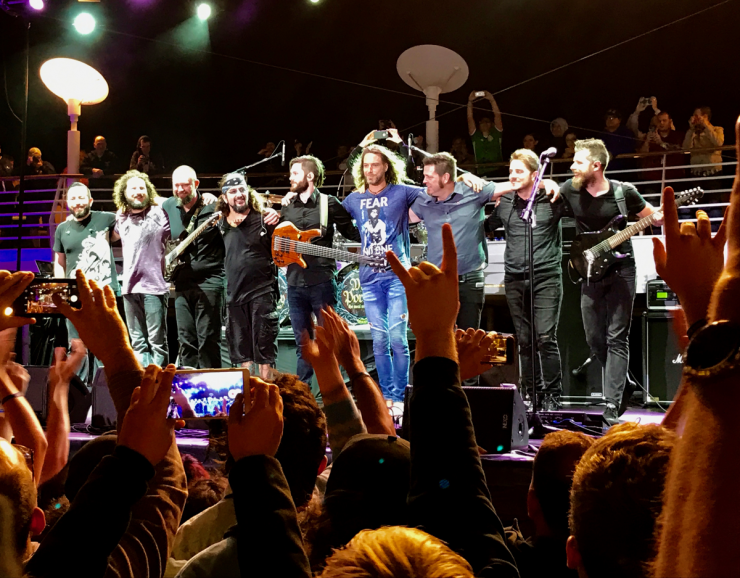 Mike Portnoy revealed his secret all-star lineup for the Shattered Fortress on the closing performance of Cruise to the Edge 2017 on Feb 10th, 2017.  Opening the set was a line-up that featured Tony Levin on bass, Diego Tejeida on keys, and Eric Gillette on guitar, who performed the 3 Liquid Tension Experiment songs, including Paradigm Shift, Acid Rain, and Universal Mind.

Haken guitarists Richard Henshall and Charlie Griffiths, bassist Conner Green, and vocalist Ross Jennings joined Eric and Diego for The Shattered Fortress lineup.  The group of stellar musicians ran through the heavy 5-song set of “The Glass Prison”, “This Dying Soul”, “The Root of All Evil”, “Repentance”,  and “The Shattered Fortress”.  Daniel Gildenlow and Ted Leonard also sang during the set.

On the first day of the cruise, Feb 7th, Portnoy revealed a surprise sail-away set with the full Flying Colors lineup of Neal Morse, Steve Morse, Dave LaRue, and Casey McPherson and performed 4 songs, .  Transatlantic followed as Pete Trewavas was introduced.  Ted Leonard filled in for the absent Roine Stolt, and the Neal Morse Band’s Bill Hubauer joined in as well. Daniel Gildenlow appeared to perform his recorded part during “Into the Blue”.

The entire event was part of Mike Portnoy’s 50th birthday bash.  You can see some of the footage from these shows below.

Portnoy also performed with the Neal Morse Band as they played their whole new album The Similitude of a Dream over two sets.  Other bands on the ship included Yes, Kansas, Steve Hackett, Pain of Salvation, John Lodge, Haken, Frost, Focus and many more.

Transatlantic – Stranger In Your Soul