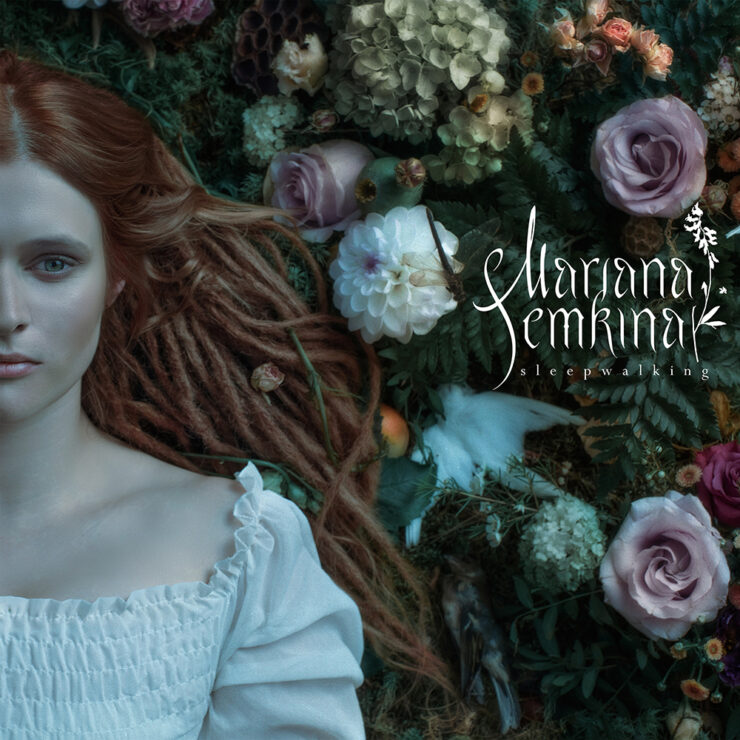 Review of the new album from Mariana Semkina – ‘Sleepwalking’.

As one-half of Russian chamber/progressive rock duo Iamthemorning (alongside pianist Gleb Kolyadin), songstress Mariana Semkina has helped craft some of the most movingly relatable and idiosyncratically decorative music on the prestigious Kscope label. (Check out our review of last year’s The Bell for more specific reasons why.) Both her voice and lyrics are always gorgeously poignant, fearless, and all-around endearingly characteristic, so it makes sense that her debut solo LP, Sleepwalking, upholds those qualities perfectly. Perhaps a bit more accessible, sparse, and vocal-focused than the relatively luscious and esoteric work of Iamthemorning, it doesn’t stray far from her already revered artistic DNA; thus, it’s another arrestingly candid and beautifully eloquent experience that’s sure to make an impact.

Naturally, Semkina has befriended and collaborated with many members of genre royalty over the years; therefore, the inclusion of guests like keyboardist Jordan Rudess (Dream Theater), drummer Craig Blundell (Steven Wilson, Steve Hackett), and bassist/vocalist Nick Beggs (The Mute Gods, Steven Wilson)—in addition to the St. Petersburg Orchestra “1703” and producer/engineer Vlad Avy—is no shock. Here, as always, she welcomes comparisons to predecessors like Kate Bush, and she clarifies that the record “draws from the Iamthemorning soundscape but exists fully in [her] world.” Likewise, she continues to write from a “therapeutic” lens—rather than “ascrib[ing] any profound meaning or concept” to the LP—through which to “get through some dark times.” Ultimately, she decided that the material was “too personal to release under any other name” aside from her own.

Right away, Sleepwalking channels Semkina’s confessional mastery into richly ornate yet subtle sonic voyages. Opener “Dark Matter,” for instance, hits you with blunt poeticisms (“One day I’ll find / The hole inside / What used to be my heart / Became dark matter”) from the jump as her smooth falsetto melodies and chants cascade over sobering acoustic guitar arpeggios, faint organic percussion, and a touch of symphonic ethereality. It captures her typically splendid fragility without fault, welcoming listeners to another round of beautiful despair as only she can provide. Of course, other pieces—such as the more texturally eclectic “Am I Sleeping,” the classically haunting “Ars Longa Vita Brevis,” the jazzily fervent “Everything Burns,” and the vocally multifaceted “Lost at Sea”—maintain that quietly divine sorrow as the sequence plays on.

There are also plenty of more robust and alarming arrangements before all is said and done. Specifically, “Turn Back Time” oozes empowerment in its lively singing, reflective words (“But it’s okay / To be afraid / When the whole world around is on fire”), and fusion of emboldened percussion, sweeping strings, delicate piano notes, and terse guitar chords. Similarly, “Invisible” begins with foreboding piano strikes and otherworldly sounds before transforming from a scarce ballad into a chillingly dreamy wall of dense harmonies and instrumental dissonance. As for “Skin,” it’s delightfully nuanced and active thanks to things like plucked strings, shuffling syncopation, and continuously bouncy interplay between piano and guitar. Near the end, “How to Be Alone” and “Mermaid Song” also kick off somewhat empty but eventually pack dizzyingly mesmeric punches.

Sleepwalking isn’t significantly daring or different compared to Semkina’s work with Kolyadin—not that it needs to be—but it does just enough to warrant its distinction under a new name. Chiefly, it’s the amount of subdued arrangements, coupled with an even stronger emphasis on her voice, that separates it from the more full-bodied and cryptic nature of Iamthemorning. Honestly, though, the two projects have far more in common than not, so anyone who’s already a fan of the pair will undoubtedly find Semkina just as cathartic, stirring, and gratifying on her own.