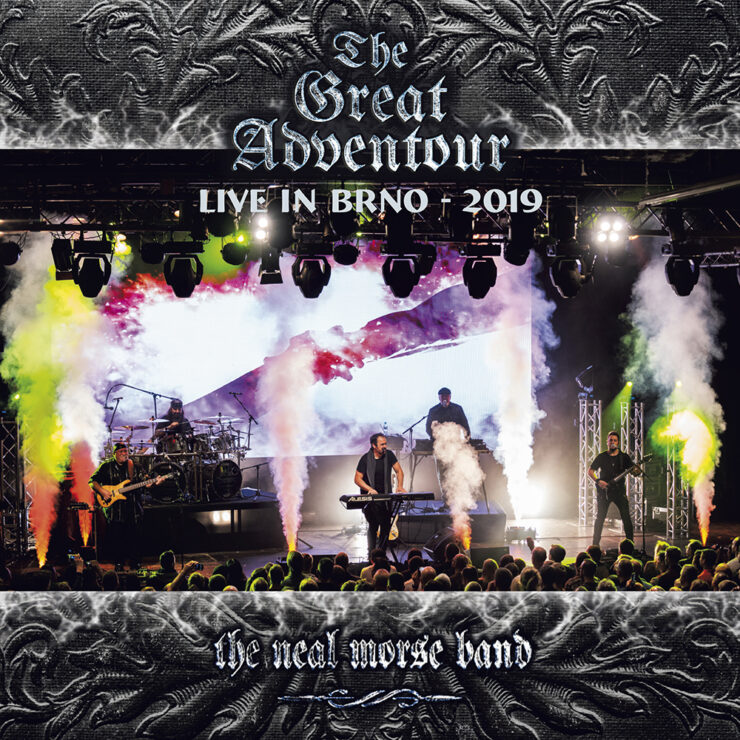 The Great Adventure album ended up getting many mentions when the best albums of 2019 were being discussed. 2020 brings us the live representation of that album, filmed and recorded in Brno, in the Czech Republic – eschewing the traditional London/ New York/ Tilburg choice for the documented concert, the crowd in this 1200 capacity venue certainly demonstrate that the enthusiasm for the band and their music extends well into Eastern Europe.

If you attended a show on this tour, you’ll know that the set list begins with The Great Adventure, played in full. The live setting gives the music that additional, slightly raw, energy, while showing that when it comes to presenting a double concept album in full for two plus hours, there are few bands who can match the skill set of the Neal Morse Band. A common criticism of live albums can be that the post production “gloss” which is sometimes applied can rob the album of its soul. That is not a criticism you can level at this album and you truly get the feeling of being in the moment as the band take the journey.

It’s hard to pull out highlights given most of this album is a unified set piece. That said, some of the standouts that brought me joy include: “A Momentary Change” – where Morse and Hubauer’s plaintive vocals move to a guitar solo by Gillette and some intricate time signature fun from the Portnoy/ George rhythm section; the depth of despair in “Dark Melody”; Portnoy’s dark and searing response vocals in “Venture in Black”; and a version of “Fighting With Destiny” where all of the elements collide into a dynamic fusion.

I should add, this isn’t just an audio extravaganza, because the whole show was preserved on video. The venue is a great choice for a filmed gig with an auditorium with a great sweeping balcony, providing an interesting backdrop beyond the standard darkened concert hall. The high def close ups and captures mean you are in the best seat in the house for all of the key moments. If I had one critique of the video it would be that at times the combination of the concert video and the amazing video backdrop by Christian Rios, make the on-screen image a bit confusing – but that’s a minor point in my book.

Special comment must be reserved for the amazing finale piece, “The Great Medley”, a chronological journey through Neal Morse/ NMB from Testimony right through to Similitude of a Dream. The dilemma of many prog bands is often how do you capture the range of your back catalogue when the short songs are 15 minutes long! I don’t think anyone hearing / viewing this medley will feel in any way short changed! For a start it’s 30 minutes long and the editing is such that you get the full flavor of each section before moving to the next one. This rapid journey through those albums, ending with the finale of TSOAD, is a bit like being at a party where every few minutes you are greeted by one old friend after another.

I’m sure someone has researched what gives the greatest live albums their status – or to put it another way, why should I buy / listen to this one? Well, it’s a great souvenir for anyone who saw the tour, an essential purchase for anyone who didn’t see the tour, and a brilliant kick off point if you have never heard the Neal Morse Band before – so no one has any excuse not to add this to their collection!

Released on March 6th, 2020 on InsideOutMusic

You can pre-order now here:
https://TheNealMorseBand.lnk.to/TheGreatAdventour2019-liveinbrno