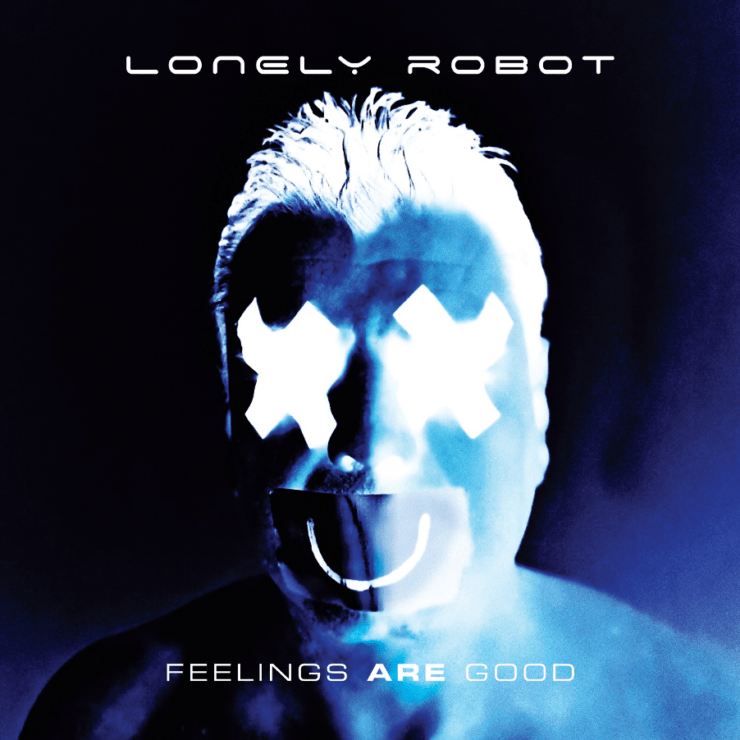 John Mitchell has been in an emotional and introspective mood lately. His appearance on the recent ‘Prog From Home’ video concert was one of the most well received by the audience of more than 110,000 viewers, with very good reason. It was an immensely powerful musical expression of solitude that made for one of the most soulful, innovative, and, well, emotional performances of the show. One man in isolation with a camera and three helium balloons, delivering a beautiful version of the It Bites song ‘The Last Escape.’ The sheer emotion of it was overwhelming.

Clearly in a similar frame of mind when recording the fourth album by Lonely Robot (the pseudonym for his solo work), Mitchell has delivered a pensive, soul-searching array of songs based on emotion and brooding contemplation. Aptly entitled ‘Feelings Are Good,’ the album abandons the astronaut theme of the first three Lonely Robot albums, and instead provides an earth-bound exploration of feelings and stories that are, while extremely varied, quite obviously personal to John Mitchell. As he states in the press bio, the songs are ‘about individual experiences and narratives that I believe were the cornerstones, good and bad, to my life.’

Mitchell, a key member of Frost*, Arena, It Bites and Kino, is a fine multi-instrumentalist, producer and composer and has an extraordinarily wide array of musical weapons in his arsenal. He is, in Lonely Robot, not reliant on other musicians to deliver his message, but he is accompanied on drums by his good friend, erstwhile Frost* band-mate and ubiquitous percussive prodigy, Craig Blundell.

The album is a heart-rending collection of memories, reflections and emotions. Almost as if in confidence, Mitchell slowly reveals his feelings to the listener, more and more as each song is unveiled. It is almost like a series of therapy sessions in which the trust to bare one’s soul increases with each session – only the songs are the therapy, and the listener is the trusted one.

I have generally been one who listened to the music and, most often, did not bother with the meaning of the lyrics – until a songwriter like John Mitchell came along. He has gone on record to state that he begins his compositional process with the creation of the lyrics, and proceeds from there. Now I understand why.

The opening (and title) track is an innovative, processed two-part vocal harmony that describes what is to follow on the rest of the album. Lyrically, it succeeds in delivering the message, but it is also unique in its production. The vocals that start and finish it sound almost machine-like – perhaps as a clinical, robotic counterpoint to the sheer emotion that is to come. After listening to the album a few times, it becomes apparent that Mitchell’s intention with the title track is to hypnotize us into security with the android-like steeliness of the vocals, only to lead us thereafter into the most human of personal observations – from sadness to boiling anger, then back into gentle solitude and ultimate heartache. Almost like the frog in the proverbial pot – or the patient on the therapy couch.

Second song “Into the Lo-fi” rips the bandage off with speed. It blasts off with a muscular Blundell drum fill and immediately confers a powerful rocking sentiment: ‘This is my life and it’s killing me now. Rewind. Rewind. Rewind.’ The track is an announcement that Mitchell intends to go back in time to revisit his personal experiences and reflections. It leaves the listener in no doubt that some intense memories and emotions will be presented by the rest of the album. And it is a great song.

Third song, “Spiders”, rewinds us to a very uncomfortable place. It is a sinister horror story – seemingly the dark memory of a frightened child that has been emotionally abused and abandoned. Based on a huge Mitchell guitar riff, the song seethes: ‘Spiders spinning innocence, now I can’t get you out of my head, Spiders you took everything, now you left me defenseless and bare.’ Dripping in anger, the track features the first of many glorious lead guitar solos on the album. This will not be the last time that Mitchell’s guitar cuts like an emotional scalpel to dissect the psychology behind a song.

“Crystalline” is a gentle and aching introspection on broken relationships. Mitchell tends to the wounds with a gentle piano and vocal melody that builds into a massive instrumental construct. With a fractured melody for a fractured heart, the signature guitar solo soars like Icarus, leading gently back into the melody. At one point, Mitchell quite literally sings ‘I’m turning this pain into art.’ Indeed – and what art it is.

“Life Is a Sine Wave”, already released as a single, is a polished Prog-rocker with an unrelenting hook. Mitchell and Blundell have an uncanny knack of combining to counterpoint insistent but complex drum patterns against inverse and unpredictable chord structures, and this is a brilliant exposition of that technique. A philosophical contemplation of life in alternating 6/8 and 5/8 timing, this composition is typical of what Mitchell is known for. The song defiantly insists that in all the darkness, tenacity must prevail: ‘You can be forgiven for trying to forget. Feign indifference you sometimes crack… Life is a sign wave, so get on top.’ The solid counterbalanced groove gives way to an exceptional lead solo in half time that will sadden your heart to breaking point. Everything you have ever loved about Mitchell’s unique, celestial guitar style is to be found in this song.

“Armour for My Heart” is a moment of ultimate brilliance built around a simple but compelling jagged kick-drum pattern by Blundell. Huge and heavenly chords are inserted into the simple rhythm to create one of the most compelling compositions of the year. The music flawlessly complements the theme of creating defenses against old wounds: ‘You’re turning this love into venomous art. But I won’t cut so easy, I’m building armour for my heart.’ The lyrics are simply gut-wrenching, and the accompanying vocal and instrumental delivery do not fall short. The feelings of catharsis and release in the chorus are almost palpable, and the emotional release of the second guitar solo is just colossal. I am a fan of complex Prog arrangements, but this is far more subtle art than that. “Armour for my Heart,” with its sheer emotion and clever instrumentation, is an apex on the album, and, for me, possibly one of the best songs of the year. It proves that so much can be done with a simple drum groove and perfect melodies.

“Suburbia” provides an appropriately suspense-filled melody for its theme. It warns the listener to run away from the ‘little cells that are private hells’ behind picket fences. Playing up-tempo and with just the right amount of anger, Blundell is given free reign by Mitchell on this song, and he is astonishing. The commentary ends with a Blundell double kick-drum frenzy that suitably describes the advised escape.

“The Silent Life” is a heart-wrenching ballad about mute anonymity that climaxes in another yearning, searing guitar solo. It will fill your ears with longing. Perhaps the simplest composition on the album, this song is not to be underestimated because, true to form, Mitchell provides the required variation with an orchestral accompaniment that is perfect for the melody. Mitchell’s voice, though baritone, has an unbearable sweetness to it, and that fact is beautifully exposed in this poignant song.

“Keeping People As Pets” is a frantic rocker built around a futuristic keyboard arpeggio that could easily double as a break-beat. Cinematic and underscored by a news reporter voice, the song is a warning against abuse, societal control and the wearing-down of individuality. Blundell’s distinctive style and staggering speed are exploited to the full, and Mitchell impressively keeps up with him on the bass guitar and other instruments. Frenzied and vivid, this one will ring true with those who have encountered manipulation, abuse or sociopathy in their lives.

“Army of One” begins and ends with the sound of marching jackboots. Filled with anger and resignation, the song allows Mitchell to go to war with himself. There is rage, there is hopelessness and there is abandon. “Let’s go to war” demands Mitchell in furious lamentation to himself. The song ebbs and flows in slow tempo to accompany the composer’s bruised emotions, and the lead solo groans in the anguish of self-defense. An allegory of warfare for personal strife, this song is a dark and powerful pronouncement on the personal war we must all wage against the ravages of our own lives. As the jackboots march away to end the song, you will feel like you have just emerged from a particularly harrowing therapy session.

“Grief is the Price of Love,” at just a minute and twenty seconds, is a beautiful and lonely closing lament. The title speaks for itself, and the song’s single, solitary chorus resolves in the most exquisite way to end the album. It is just a simple vignette, but extraordinarily effective – a perfectly constructed ending to an already overwhelming album.

There are two bonus tracks – orchestral versions of “The Silent Life” and “Crystalline”. In these, the themes are reprised, only now stripped down to simple and gorgeous string backing. These re-interpretations are spine-tingling and well-worth inclusion on the album. Call them two free re-examinations, with the therapist in a particularly gentle and empathetic mood.

The album’s production is up to Mitchell’s usual high standards, though this time perhaps flavored with a touch more sentiment. Paul Tippet’s cover art is suitably disturbing and reflects the inner turmoil and emotional wounds so compellingly described in the music. The startling artwork quite literally reflects Mitchell’s emotional bandages, but you should not let it unnerve you – there is also beauty and resolution to be found within.

Words like ‘powerful’, ‘sincere’, ‘impassioned’ and ‘intense’ do not quite describe this record. You have to hear it to fully understand. A cascade of emotions, ‘Feelings Are Good’ is a remarkable anthology that is obviously of great personal importance to its creator, and rightly so. A testament to Mitchell’s accomplishment as a composer, this cathartic album will tear at every emotion you have. Are its choruses as catchy as those he created for It Bites? Not necessarily. Is its instrumentation as technical as that of Frost*? Absolutely not. But that is exactly the point. Mitchell can do anything musically and, it seems, lyrically. This time he has selected the outcome of sheer emotion, and the results are just as compelling as any complex Prog masterpiece. You will cry, you will rejoice, you will rage, you will contemplate, you will weep, you will rant and you will question. But at every moment, you will feel the breathtaking power of Mitchell’s music.

An unsung hero of Progressive Rock, John Mitchell has yet again delivered an outstanding release that is worthy of the highest praise. This obviously private man has bared his soul, and we, the listeners, should be grateful. An absolute must for fans of authentic music, ‘Feelings Are Good’ is the most emotionally charged album of 2020. Partake, dear reader, hear the emotion, and let it bare your own soul to yourself – it will definitely make you feel better.

Key Tracks: Into the Lo-Fi, Spiders, Armour For My Heart